Finance Minister Nirmala Sitharaman on Monday held a meeting with representatives of the semiconductor industry of the US and invited them to make further investments in India. 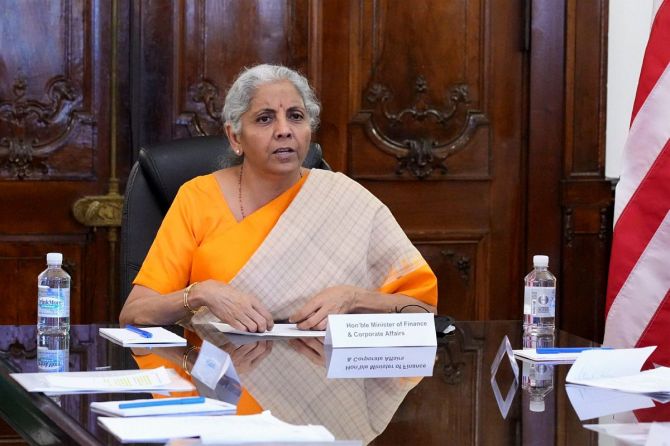 The finance minister spoke about opportunities for companies situated in Silicon Valley and about the government of India's commitment to be a reliable player in the entire semiconductor value chain with dedicated incentive for the sector in mission mode through the Indian Semiconductor Mission.

Last year, the government approved a Rs 76,000-crore scheme to boost semiconductor and display manufacturing in the country in a bid to position India as a global hub for hi-tech production, and attract large chip makers.

During the roundtable with industry leaders from the semiconductor ecosystem, including design, manufacturing, equipment, technology and systems in San Francisco, the participants informed the finance minister that they have substantially scaled their capabilities in India in the last few years and are also collaborating with Academia for R&D.

"The participants also mentioned that in view of global supply chain disruptions, they need to review over-reliance of supply chain in certain jurisdictions and with the right policies and talent in place, next decade will belong to India," the finance ministry said in a tweet.

Participating in the meeting Devinder Kumar, chief financial officer and treasurer of AMD spoke about the company's growth in India and how India is poised to grow strongly with the vision of Atmanirbhar Bharat driving it.

Western Digital, senior vice president, corporate business development Dan Steere said the company is excited to explore opportunities with the government of India to expand manufacturing in the Indian market.

The finance minister also met Uber CEO Dara Khosrowshahi, who gave a snapshot of the company's investment in India and expansion plan.

During the meeting, he expressed his optimism about the company's growth in India across segments, and how the company is looking to quadruple the number of drivers on the platform to 2 million.

Widmar informed the finance minister that the company's plant will be operational shortly and this is their lowest-cost factory across jurisdictions with very low carbon footprint and recycles 90 per cent of the material.

He also said that India has been at the forefront of reforms made in the renewable energy sector and the government's new policy facilitates companies to operate at a level-playing field.

Opportunities around green hydrogen and sustainable energy were also discussed at length.