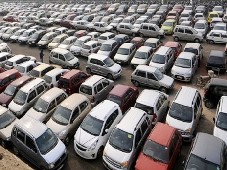 It’s not automobile makers alone worried at the continuous fall in car sales.

The steel sector, which has spent a lot of money to tap the automobile segment, is nervous on its investments.

Tata Steel had forged an alliance with Nippon Steel of Japan and the two are spending Rs 2,400 crore (Rs 24 billion) to set up a facility at Tata’s Jamshedpur plant for the automobile sector.

The plant is expected to come on stream by December this year.

JSW Steel, in 2010, signed up with JFE of Japan to set up a 2.3-mt cold-rolling unit to make steel for the auto sector.

The first phase will be commissioned this year and the rest in 2014.

This would mean a fifth of the capacity at its Bellary factory would be exclusively for the auto sector.

Asked to comment, Tata Steel said, “We sell slightly more than one million tonnes of steel to the auto industry, about 15 per cent of our total sales.

"So, while we have felt the impact of the downturn to some extent in HR (hot-rolled steel) sales to auto, we had pro-actively developed other segments, particularly SME (small and medium enterprises), which has helped us to not only counter the slowdown in auto but also to sell the additional volumes that we have from our new mill.”

However, an official from JSW, on condition of anonymity, told Business Standard, “Steel demand in India is sluggish and we were hoping on the auto sector to boost demand.

"The projections don’t look good but we are hopeful that in a couple of years, the sector will bounce back.”

In 2010-11, major steel makers in India made vigorous efforts with Japanese steelmakers to get their auto-grade technology.

The move was triggered by the massive growth in car sales here (30 per cent in 2010).

The high grades of auto steel in India are still imported, as Indian manufacturers are unable to produce those.

An analyst tracking the sector said, “Japanese auto-grade steel is

one of the best in the world.

"That is why Indian companies looked to plug the gap by licensing their technologies.

But no one imagined car sales in India would nosedive the way they have.

"Now, steel makers are almost ready to commission the large capacities meant exclusively for the sector, in the range of 15-20 per cent of their total capacity.” Essar Steel had also, like Tata and JSW, signed an agreement, with Kobe Steel of Japan. An Essar spokesperson said, “Yes it is a matter of concern, as our sales to the auto sector/ancillaries are down.

"However, Essar is a versatile steel producer, capable of producing a variety of grades for applications across the flat steel segment.

"We are mitigating the downturn in auto sales by augmenting sales in other value-added segments.”

At the beginning of 2012, the Society of Indian Automobile Manufacturers said the sector would grow by 10-12 per cent.

Last month, after a series of revisions, it said the sector might actually miss the sales numbers of 2012.

When asked, Tata Steel said, “The company believes the slowdown is temporary in nature, given low vehicle penetration in India, compared to other geographies of the world.”

After selling a million tonnes to the auto sector in 2012, it believes sales will be flat for 2013.

Essar Steel, too, believes 2013 would be much the same.

The company is pinning hope on the government The economic sentiment, demand and the like would be no different for next year, unless the government boosts the industry by way of flat excise duties of 10 per cent on all cars and implements the NAM (National Auto Mission) Plan in auto.

The plan aims to get India a turnover of $145 billion for cars by 2016 but this requires policy intervention.

Uttam Galva Steels, one of the best auto-grade steel makers in India, is not even looking at expanding production.

In a recent interview with Business Standard, Ankit Miglani, deputy managing director, said the company was only looking at raising its margins and profits, by making production more efficient.

He said, “There are no plans to hike production for the next couple of years.”
Shubhashish in Mumbai
Source: