Failed to get confirmed ticket on Rajdhani? Fly Air India!

Air India tickets would be offered to such passengers through IRCTC. 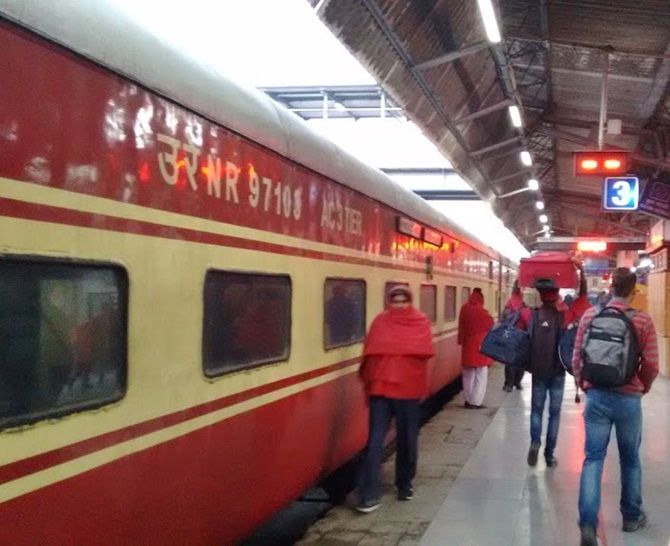 Maharaja will soon come to help wait-listed passengers of Rajdhani trains as such travelers will be provided with the option to fly by Air India by paying little extra.

Air India and IRCTC have already entered into a pact for the proposed arrangement which is expected to be in place "within a week", the carrier's chief Ashwani Lohani told PTI.

Under the proposed arrangement, people who have unconfirmed tickets across classes on Rajdhani trains would have the choice of boarding an Air India flight, provided the airline has services in the particular train route chosen by the passenger.

Air India tickets would be offered to such passengers through IRCTC.

Lohani, who is Air India Chairman and Managing Director, said details are being worked out and the arrangement is expected to be in place "within a week".

The wait-listed passengers of AC First Class of Rajdhani trains would not have to pay any additional amount in case they decide to take an Air India flight.

In the case of those booked on Rajdhani Second and Third AC classes, the passengers would have to pay up to Rs 2,000 per ticket as additional amount for flying Air India, Lohani said.

"The details are being worked out and we hope to have this in place within a week," Lohani, who himself is a Indian Railways Service (IRS) officer, said.

The latest move is expected to help Air India in filling up more seats on its planes amid the carrier working on ways to turnaround its fortunes.

In this regard, Air India's wholly-owned subsidiary Air Alliance plans to increase the number of ATRs in its fleet to 35 in the next four years.

Currently, Alliance Air has seven ATRs in its fleet, including two ATR-42 that are to be phased this fiscal. It expects to have at least 18 ATR-72 planes by March 2017.

Lohani along with senior officials today held deliberations with representatives from at least 16 states, most of whom also expressed willingness to provide viability gap funding to the carrier.

According to Lohani, some states even suggested that the national carrier could look at starting overseas flights from newer places.

Nagpur-Nashik, Raipur-Kolkata and Kolkata-Ahmedabad were among the virgin routes that were discussed during the meeting with representatives from the states.

The national carrier expects to have additional 100 aircraft, including single aisle, wide body and regional jets, in the next four years.

Lohani said that many states were willing to offer VGF or other means of financial support to ensure that Air India does not incur losses by starting new flights for regional connectivity.

"We will not require VGF for all the flights as potential does exist for many of the routes that were suggested. But where VGF is required the states are willing to provide us funding," he noted.