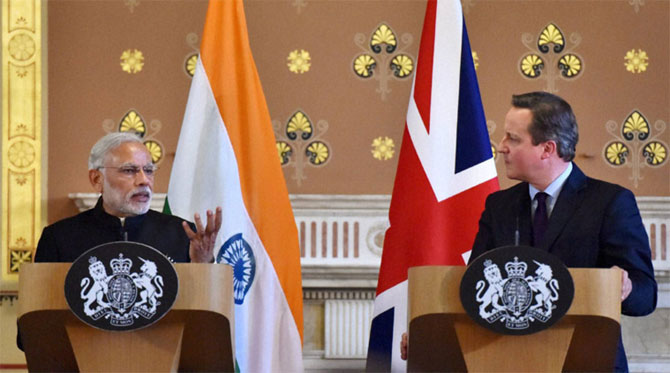 Prime Minister Narendra Modi’s three-day visit to Britain has seen India and the UK agreeing on Rs 90,000 crore (Rs 900 billion) in commercial deals and concluding negotiations over a deal that seeks to increase bilateral cooperation in the field of civil and military technology and nuclear research projects. The major investments made by the private sector on both sides include:

Lightsource Renewable Energy Holdings has announced a Rs 20,000 crore (Rs 200 billion) investment in India. It will design, install and manage around 3 gigawatts of solar power infrastructure in India over the next five years.

OPG Power Ventures will invest Rs 29,000 crore in India, creating around 100 UK jobs over the next few years as well as jobs in India. The investment will create 4,200 megawatts (Mw) of new power capacity in India, of which 1,000 Mw will be solar power and 3,200 Mw will be thermal and renewable power in Tamil Nadu.

Kloudpad Mobility Research’s Rs 1,000 crore (Rs 10 billlion) investment to produce the next generation of smart watches, wearables and tablets in south India will support 50 highly skilled researchers in the UK and create 2,500 manufacturing jobs in India.

Wipro is increasing its investment in the UK with the opening of its newest office for Wipro Digital. Wipro Digital employs more than 50 people in London and plans to hire another 200 in the next 12 months.

King’s College Hospital NHS Foundation Trust and Indo UK Healthcare Pvt Ltd will set up King’s College Hospital, Chandigarh. This is the first of 11 institutes for health that will be developed across India, which when fully implemented will amount to a Rs 10,000 crore investment in India’s health care system.

SSPSL, a subsidiary of India’s Strides Shasun and a leading provider of services to the pharmaceutical industry, will invest Rs 80 crore in its facility in Dudley, Tyne and Wear. This investment will create up to 60 new jobs.

HSBC announced the launch of its Skills for Life initiative in India, a programme to skill 75,000 disadvantaged young people and women over five years. The programme will support non-governmental organisations in implementing projects in three focus areas: employment and entrepreneurship-linked skills training for disadvantaged youth; upskilling of teachers and educators; and financial literacy and entrepreneurship development of women.

Integrated learning solutions provider Dexler is setting up Dexler Education UK, its European headquarters, with an investment of around Rs 100 crore (Rs 1 billion). This will create approximately 50 UK jobs to deliver technology-assisted learning programmes for use in the context of corporate training.

Merlin Entertainments is to open the first Madame Tussauds on the subcontinent in New Delhi in 2017. The company will invest up to Rs 500 crore (Rs 5 billion) over 10 years with a view to opening more of the company’s iconic global brands in India. The brands include Legoland Discovery Centre and Sea Life Aquarium.

In a deal worth Rs 200 crore (Rs 2 billion), Holland & Barrett International has partnered with Apollo Hospitals to open 1,000 Holland & Barrett outlets in India over the next five years. The first store will open in New Delhi in January 2016 and there are plans to have 115 outlets operational by the end of the year.

TVS is opening a Rs 200 crore (rs 2 billion) advanced logistics facility in Barnsley, generating 100 new jobs which will grow to 500 across the TVS Group over five years. As part of Team Leidos, the company is integral to delivering Rs 5,000 crore (Rs 50 billion) worth of procurement savings to the ministry of defence over 13 years.

TVS has established a joint venture with the Automobile Association (AA) worth Rs 100 crore to establish the first global roadside assistance brand in the Middle East, Africa and Asia.

HDFC has announced a proposal to issue rupee-denominated bonds overseas of up to Rs 4,900 crore (Rs 49 billion) under Reserve Bank of India guidelines, in one or more tranches. HDFC intends to list the initial issue of bonds for trading on the London Stock Exchange.

Bharti Airtel announced that it intended to issue its maiden sterling bond of up to Rs 5,000 crore (Rs 50 billion) to be listed on the London Stock Exchange. The potential bond issue is subject to market conditions and will help Bharti extend maturities and diversify the investor base in its debt portfolio.

Indiabulls Housing Finance Limited has invested Rs 660 crore in OakNorth Bank, a recently authorised bank lending to small business owners. With this investment, Indiabulls will hold a 40 per cent stake in OakNorth.

State Bank of India announced the opening of two new branches in Hounslow and Ilford. This is expected to generate new jobs.

London Stock Exchange Group and Yes Bank will sign an agreement to foster the development of bond and equity issuance, with a focus on green infrastructure finance. Yes Bank plans to list a green bond of up to Rs 3,300 crore through medium term notes on the London Stock Exchange by December 2016.

Yes Bank also intends to raise further capital in London, potentially through the listing of global depository receipts as part of its overall Rs 6,500 crore equity capital raising plans. State Bank of India and the London Stock Exchange Group have announced a collaboration to create the FTSE-SBI India Bonds Indices to be used initially by a new investment fund run by State Bank of India. These indices will facilitate investment in India’s bond markets and support market liquidity and pricing.

India and China signed 24 agreements worth over $10 billion during Modi’s three-day visit. These included:

$35 billion of public and private investment was pledged by Japan as part of the India-Japan Investment Promotion Partnership for projects of mutual interest in the areas of infrastructure, connectivity and the rejuvenation of the Ganga, among others. Other agreements included: