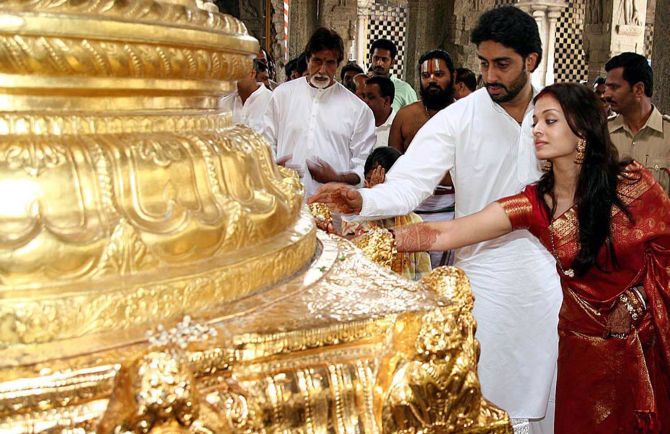 The Punjab National Bank has offered highest rate of interest, 1.75 per cent per annum, to Tirumala Tirupati Devasthanam, which manages one of the richest temples in the world, for a three-year deposit under Gold Monetisation Scheme.

TTD will invest around 2.3 tonnes of gold with fineness not less than 0.995 in the PNB.

While TTD will directly invest around 1.3 tonnes of gold, another one tonne of gold investment will be shifted from State Bank of India where the existing gold investment matures in March.

The bank will be responsible for taking the mixed gold to mint and getting it purified, including transportation, insurance, melting, conversion and assaying charges.

For the refined gold, Indian Overseas Bank has quoted interest rate of 1.25 per cent per annum for a three-year deposit under GMS.

TTD prefers to redeem gold rather than cash at maturity, as offered under earlier Gold Deposit Scheme.

According to the temple authorities, 4.5 tonnes of gold already in banks under GDS fetches an interest of 80 kg of pure gold every year.

Earlier, the investment committee of TTD had decided to keep the gold corpus intact.

In December, the committee said it would meet government of India and RBI officials, seeking amendments in medium-term and long-term deposits under GMS so that interest is paid in gold only.

The short-term deposits under GMS are similar to GDS, which is being followed by TTD.

The temple management had earlier said that the existing rate of interest offered by banks on short-term deposits under GMS was very less and asked the banks for higher rate of interest.