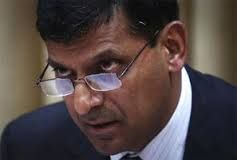 Stating Indian economic recovery is still uneven, Reserve Bank of India Governor Raghuram Rajan has exuded optimism that the country will be ‘solidly’ in the 5 per cent growth bracket during the course of this fiscal and accelerate further in the next financial year.

The RBI governor also said he is not ‘overly’ worried about any interest rate hike by the Federal Reserve, saying the country had enough foreign exchange reserves.

Rajan was speaking at the Institute of International Finance in Washington on Saturday.

He also said there was no need for ‘grand-sounding announcements’ and that the India needed to ‘fix the plumbing,’ including correcting problems in coal and gas sectors to accelerate improve recovery and get the Indian economy back on track.

Rajan said that while India has to do its basic homework, the ‘good news’ is that there are ‘lots of low-hanging fruit and we got to pluck them’.

"Of course the big question is why we did not do it before but I think there is an environment and there is a willingness at this point to do what it takes.

"What it means, I would caution people on, is not at this point grand-sounding announcements because that is not what we really need.

"We need to fix the plumbing.

"We need to do the basic stuff which will get the economy back on track," he said when asked how India will meet the high expectations that have been set by the new Narendra Modi government to revive economic growth.

In a lighter vein, Rajan said the expectations need to be toned down.

He however added that on the real side focus should be on getting the projects that are stalled going again, fixing problem in coals and gas, ‘which are not the stuff of headlines but are quite important’ as well as getting businesses and government departments to make payments on time.

Rajan said beyond 2016, the Indian economy will grow depending on what the country does over these couple of years.

Rajan noted that there is massive push on infrastructure.

"On energy we have to get the pricing of energy right in India.

“This means gas pricing, coal pricing so as to give people incentive to explore and invest.

"I think in the next few months, these big decisions will be made and that will create a much clear environment for investment in energy which India needs tremendously," Rajan added.

On whether the India government will be able to deliver on the expectations of economic growth, Rajan said, "Talk is cheap. What we really have to do is deliver. We have to start delivering.

"We are in the process of doing it, but watch the space and see the results. Hopefully that will convince you," he said.

He said in order to revive the economic growth, ‘execution’ is important and the government is engaged in that aspect.

"The inflation path or the glide path that we have proposed has wide acceptance but it is still not enshrined in the law.

"For now I have what I need, which is the glide path which has at this point convinced the financial markets that we mean what we say and and we will do what we say".

Outlining the key pillars that the government is focused on, Rajan said apart from clarifying the monetary framework, the other area that India is focuses on is creating a more vibrant banking sector.

"We propose to license a number of different banks," which like small finance banks would have the ability and mandate to lend to individuals and small enterprises.

"There is a whole restructuring of the banking sector that is going to happen," he added.

Rajan also pointed out that another ‘ongoing process’ is deepening the financial markets, including bringing more investors including foreign investors into those markets.

He said the government is also focused on fixing financial distress.

"We have some distress on the banking sector balance sheet.

“We need to make the banks come together to resolve those problems and move forward. The earlier they resolve it, the better," he said.

Terming financial inclusion as the "last big item we need to fix," Rajan said there is need to bring more Indians into the financial fold and lend to more small enterprises that do not have access to credit.

"This is really our framework for the next few years," he added.

On the possibility of some volatility in emerging markets once the US Federal Reserve decides to raise interest rates, Rajan said "If the Fed starts raising interest rates, as I presume they will, it will be good for the rest of the world.

“The rest of the world will benefit from US growth".

Rajan said: "It could create some volatility for the emerging markets.

"My hope is that after the initial volatility there will be differentiation, and the financial investors would try to see where there is some macro-stability.

"And I hope India comes out in (that) group that looks like it has stability".

The RBI governor added that he is ‘not overly worried’ about that process given several factors that are in India's favour like the plenty of reserves it has relative to where they were last year.

"We have got inflation coming down in a substantial way.

“We have got a fiscal deficit which is on a glide path to three per cent in 2016 and we are on the beginning path of much stronger growth," he said.

He added that India is not trying to manage the exchange rate.

"We are not overvalued at this point but reserve build up has not come at the expense of the value of the rupee," he said.