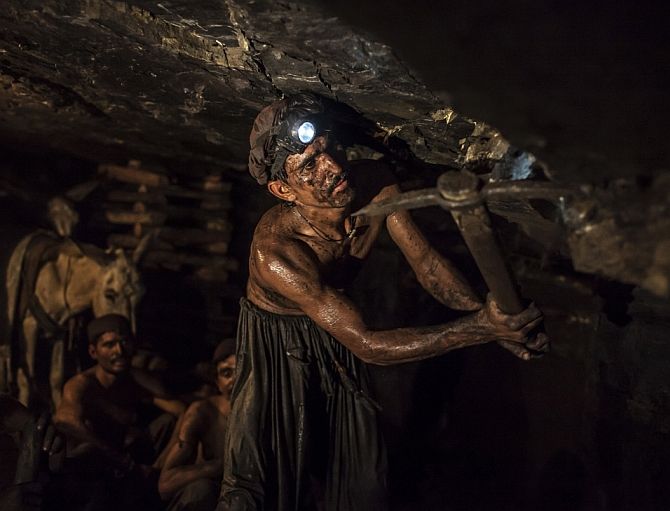 The Modi government’s e-auction policy for coal, meant to shield the consumer against hike in electricity charges, has already led to serious allegations of cartelisation among the bidding corporates. Matters came to such a pass that the government at one point last week was considering inviting the Central Bureau of Investigation to probe the matter, reports Sheela Bhatt/Rediff.com.

Is the Narendra Modi government’s policy for the e-auction of coal sustainable?

The question is on all the stakeholders’ mind except the government’s.

The Modi Sarkar is basking in the glory of the ongoing e-auction of coal mines. The coal ministry is claiming that the auctions for 34 blocks which have been completed, will fetch state governments around Rs 2.13 lakh crore, including royalty, from these mines over the next 30 years.

Modi and his ministers are smiling because it’s also a political victory of sorts. They have been able to cross the legendary figure quoted by former Comptroller and Auditor General Vinod Rai who said in his report on coal allotment that the United Progressive Alliance government’s coal policy caused the exchequer a loss of Rs 1,76,000 crore. Indeed, the Modi government has got much more money out of natural resources like coal than expected by anybody.

This time the Modi government offered a system of reverse bidding, where the auction of coal mines was designed not to favour the highest bidder but the mines will go to the bidder who quotes the lowest figure. Such reverse bidding is for electricity-producing companies in the regulated sector, commonly known as “end-users”, with certain terms and conditions.

Finance Minister Arun Jaitley said in February 2015 at an energy investment seminar, “In reverse bidding, the cost of power is going to be linked with the rate at which you get the fuel.” He said a State subsidy was not sustainable, meaning the government wants to eventually save on subsidies offered to people for getting costly electricity cheaper. So, the offer of coal mines to the cheapest bidder will help by saving money that goes into subsidies.

"One way by which people want to provide cheaper electricity is by the State subsidising it. A State subsidy really means that you will have to tax people more in order to provide something free to some other people," Jaitley said.

The Modi government has claimed again and again that e-auction of coal is a mechanism executed to reduce subsidies to the power sector; it also ensures that the consumer’s electricity bill doesn’t shoot up. Also, it is trying to use natural resources in a judicial way with an optimum advantage to the states which own it.

While on a visit to Madhya Pradesh, Prime Minister Narendra Modi reminded the people that the UPA government's policy on coal led to a loss of about Rs 1.76 lakh crore. He praised his government for ensuring transparency in the e-auction system. During electioneering for the Lok Sabha polls he had vowed that he would not serve as prime minister but as a watchman to keep a vigil on every single penny of the public that is invested in national development.

"I have no personal agenda to pursue," Modi said in March 2015, while talking about his government’s coal policy. Doing things in good faith is fine but the competence with which you carve out public policy is a different ball game. The question doing the rounds in the coal and power ministries is pertinent.

First of all it defies logic that bidders of coal mines are promising “zero fuel cost”. Meaning, what they pay for coal now will not be translated into a higher price for electricity later. Everybody knows there is no free lunch in the world of business. But, the Modi government says power-producers will buy coal mines from the government but will not charge the consumer one paisa after using the coal to produce and supply electricity.

Certainly, nobody wants to carry a brief for the bidders who are rich corporations adept at games played in the corridors of power, but will the policy which is conceived as pro-people serve the people's interest even in the long run? Or, will it add to the cost of living as and when you use power in the post e-auction era?

Some of the senior bureaucrats in the power and coal ministries fear that only the future can tell how the rich corporates will reclaim the money spent on bidding through e-auction. There will be hidden cost transferred to the consumers, says a senior bureaucrat while explaining the pitfalls of the e-auction policy to Rediff.com.

He says, “After a decade or so, the same power producers who have got the coal mines will make a noise and ask for concessions from the government or will request a revising of the formula because the logic behind the e-auction policy is just not sustainable in the long run.”

Former finance minister P Chidambaram has also written emphatically about it, posing a question, ‘Where will the money come from?’

Chidambaram argues, ‘The first stop will be the banks. The winners will go to the banks, flaunt the allocation orders and ask for loans. The banks will ask them how they propose to repay the loans. The winners will provide a statement of expected revenues. The key factor in the statement will be the ‘price’ of the final product: electricity, iron and steel, cement, aluminium etc.’

Chidambaram thinks the winners will go to the regulator (government) and demand a revised tariff that reflects the increased cost of coal. He writes, ‘In some cases, thanks to the reverse bidding method, the winners have bid a negative amount per tonne of coal. In such cases, the pass-through will be zero -- that is the cost price of coal, it will be assumed to be zero! Inevitably, other variable costs will be inflated or the cost of coal will be loaded on the capacity charges and recovered from the distribution company (discom). In turn, the discom will apply to the regulator for an increase in tariff of the electricity that will be sold to the consumers.’

Companies like Vedanta, Hindalco, Balco and GMR Chhattisgarh Energy, Jindal Steel, Essar Power, GVK Power, Adani Power, JSW energy, Reliance Power, Sesa Sterlite are among the 134 firms which are into the bidding and are desperate to get coal at the earliest.

However, already a business daily has published a report saying ‘the power companies that have won coal blocks in the recent auctions are finding it tough to raise funds -- not just to operate or develop the mines that they just got, but to run daily operations as well -- as banks have become wary of the government's move to limit the cost that electricity producers can pass on to consumers.’

Even if this hurdle of cash crunch is overcome, it is anybody's guess how the e-auction policy will reach its logical conclusion -- that is, ensuring that consumers do not pay a higher price for electricity.

While talking to Rediff.com, a senior BJP leader who is in the know of the coal policy assures that the e-auction will ensure that power producers do not increase the price per unit of electricity but, he highlights, it will not be possible to reduce the current price in any way. Also, he says, the price of steel, aluminium and other products will increase since the bidding of mines for them was highly competitive.

A senior bureaucrat in the concerned ministry told Rediff.com that the per unit cost of electricity that we get in homes and factories consists of two types of cost. Capital/capacity charges and fuel cost. When the Modi government offers the coal mine “at the cheapest possible rate” to the power producing companies while doing aggressive bidding, they are showing a zero cost of fuel and in some cases even a negative fuel cost.

But, experienced officers claim they will recover whatever little (which is also in millions, obviously) is paid to the government through e-auction by hiking up the capacity charges. There is no alternative to it, he claims.

Some dozen bidders have taken a very aggressive stand discounting the mining fee, and they have to make money elsewhere. Industry sources claim that coal washing costs, sizing/handling costs, middling in open market, transportation and shipping costs, handling of rejected coal etc will all be inflated, which will determine the final price of coal that will be used to generate electricity in their power plant.

A senior bureaucrat who is not ready to talk on record claims that power producers have applied for coal blocks through companies which have not signed a Power Purchase Agreement with state governments. They have cleverly done this so they can, before fixing the rate per unit of power through the PPA, do “adjustments” by inflating expenses and costs which come under the non-fuel category.

Above all, the e-auction policy for coal has already led to serious allegations of cartelisation. It is so serious an issue of violation of rules that, last week, the government at one point was considering inviting the Central Bureau of Investigation to probe the matter.

There is no doubt the Modi government is monitoring e-auctions with extra caution and is responding to the “problems in policy” in real time.

There is a curious case of bidding for a coal mine named Gare Palma IV/2&3 that has 155.49 million tonne in extractable reserves. This is the mine with one of the highest coal production capacities.

There were three bidders and all are powerful entities: JSPL, GMR and Adani. When the bidding started all three were in the fray. But, GMR and Adani withdrew their bid after just one round of bidding. Jindal then bid by adding just Rs 8 to fix the reserve price of Rs 100 and got the coal mine at Rs 108 a tonne! The government panicked to see the highest coal producing mine, reserved for the power sector, get the lowest winning bid, while similarly developed mines got bids of around Rs 470 a tonne. Even a couple of under-developed mines got around Rs 302 to Rs Rs 650 a tonne.

Industry experts claim that for the Jindal firm, Gare Palma IV/2&3 is important because he has a ready market for it in South India and his plant is starving for coal. The previous allocation of the same coal mine was cancelled by the Supreme Court, so he wanted it back through the e-auction.

Although the government has not yet said on record that cartelisation had taken place, sources claim that it has a strong case that it was indeed so. If the allegation of cartelisation is proved it's a serious matter because it is a criminal offence. In fact the government has gone aggressive and allotted the cancelled blocks to Coal India, a public sector company. Jindal and Balco have gone to court against the government’s decision.

In the midst of so many historic developments taking place in India’s coal sector, Sheela Bhatt/Rediff.com spoke exclusively to Coal Minister Piyush Goyal, posing all the questions raised above. Goyal, an educated, suave leader who is upwardly mobile since the rise of the Modi era in the BJP, did not duck any questions.

Don’t miss the Piyush Goyal interview to know all you should know about India’s coal sector!