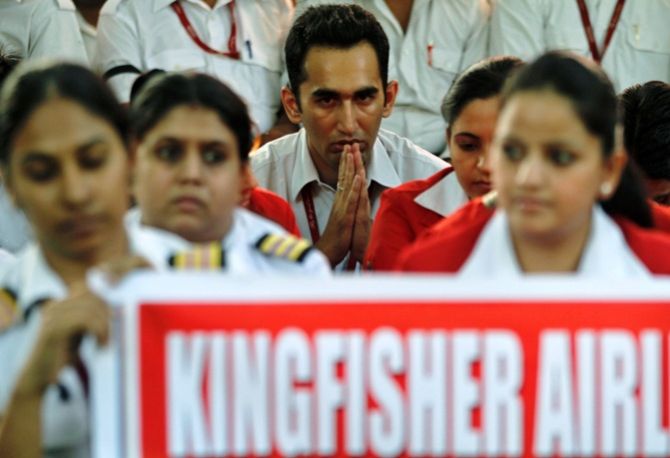 The Employees' Provident Fund Organisation has also slapped a notice of Rs 762,000 on the airline promoted by Mallya for short payment of PF dues.

Earlier this week, Labour Minister Bandaru Dattatreya had said the ministry will soon launch an investigation to check whether there were any anomalies in the provident fund contributions made by Kingfisher Airlines for its employees when the carrier was functioning.

"A Squad of Enforcement Officer has been constituted for verifying compliance position in respect of all its employees as payment of contributions stopped after September 2015," Labour Ministry said on Tuesday.

However, the ministry said: "There is no complaint available on record either from members/unions (Kingfisher employees) regarding non-payment of EPF dues by the company."

Mallya, mired in controversy for leaving India in the middle of a massive loan default is facing probe from several agencies, including Enforcement Directorate.

Under fire over dues totalling over Rs 9,000 crore (Rs 90 billion) of long-grounded Kingfisher in unpaid loans and interest, Mallya left the country on March 2.

"The last inspection revealed the company has paid EPF and other dues on salary payable up to December 2012.

“Kingfisher Airlines contributed to the PF in March 2012 for 6,185 employees. The PF compliance to the number of employees have gradually reduced to 3,339 in the month of December 2012," the statement said.

It further said: "The employment strength of Kingfisher Airlines reduced after December 2012 due to closure of its operations and remittances were made for two skeletal employees up to September 2015 and thereafter minimum administrative charges were paid."

As per the statement, the aviation licence of the airline was suspended in October 2012 by the Director General of Civil Aviation and flight operations stopped from December 2012.

The ministry said a total of 5,675 PF claims were settled from 2012-13 to the employees of Kingfisher airlines.

Also, it added that Provident Fund has been in respect of 12 deceased employees.

Image: Employees of Kingfisher Airlines take part in a protest against the company in New Delhi. Photograph: Reuters