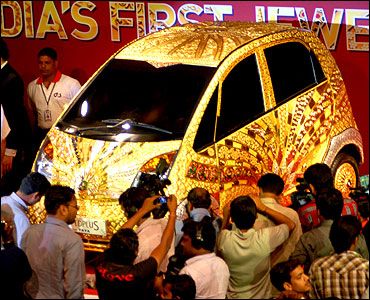 'Nano is like an open canvas for us. We have the option of positioning it on the lines of the (Volkswagen) Beetle or the (BMW) Mini.'

Besides the Nano, among the most noted car brands Tata Motors rolled out in the recent decade were Manza and Vista. After the initial pull, demand for both brands (known formerly as Indigo Manza and Indica Vista) nose-dived just like the Nano.

After years of sustained poor performance, the company was forced to pull out both models from the production lines. Nano’s production, though, continues unhindered despite mounting losses.

However, the excitement, faded in the ensuing quarter when Nano sales almost halved to 2,352 units in April-June compared with 4,529 units sold in the same quarter a year ago. In March, Nano sales dropped to 732 units, far from the 20,000 units a month envisaged earlier, according to the Society of Indian Automobile Manufacturers.

Last year, Tata Motors tried to shed the ‘cheap car’ tag and reposition the Nano as a smart city car on the lines of Maruti’s popular Alto and Hyundai’s Eon. With the launch of GenX Nano, featuring a boot, improved styling and an automatic gearbox, the car saw a sharp mark-up in cost to the tune of 50 per cent.

Despite the change, Nano sales remain disappointingly low, even as buyers flocked in encouraging numbers to Renault showrooms to buy the Kwid, a tall and stylish 800cc hatchback the French company launched a year ago.

Insiders and market watchers believe the ‘cheap car’ tag, apart, the negative publicity received during its initial days when pictures of Nano cars catching fire went viral, became a pivotal point of consumer rejection. “Safety issues concerned the Nano buyer the most during that period,” said a Mumbai-based analyst.

One of the biggest causes of worry for the Nano was the company’s near-failure to tap its overseas demand. Before its commercial launch in India, the then chairman Ratan Tata shared his plans to take the car to developing markets of south-east Asia, Latin America and Africa.

The car, however, has reached the shores of Sri Lanka, Nepal and Bangladesh. An e-mail questionnaire sent to Tata Motors seeking comments on the issues raised by Mistry remained unanswered.

“The Nano product development concept called for a car below Rs 1 lakh, but the costs were always above this. This product has consistently lost money peaking at Rs 1,000 crore. As there’s no line of sight to profitability for the Nano, any turnaround strategy for the company requires to shut it down. Emotional reasons alone have kept us away from this crucial decision,” said Cyrus Mistry, the ousted chairman of Tata Sons, in his letter to the Tata Sons board.

With Tata Motors exhausting all means to make the car a commercial success, the company’s former managing director Karl Slym had told Business Standard: “Nano is like an open canvas for us. We have the option of positioning it on the lines of the (Volkswagen) Beetle or the (BMW) Mini.”