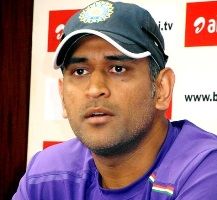 Dhoni on Monday became the co-owner of Chennaiyin FC, one of the eight franchise of Indian Super League.

The team was originally bid by actor Abhishek Bachchan and Vita Dani, belonging to the Asian Paints family, who are the co-owners.

Dhoni played football and was a goalkeeper in his team before he started playing cricket.

It may be noted that Dhoni heads the Chennai Super Kings, an IPL team that is owned by India Cements.

ISL’s aim is to help India, currently 145th in FIFA’s world rankings, qualify for the 2026 World Cup, the organisers said in October.

Based in Chennai, Chennaiyin FC will begin playing this month during the inaugural season of ISL.

Chennaiyin FC will start their ISL journey on October 16.

Kohli, through his company, invested in the FC Goa franchise of the Hero Indian Super League.

The other notable group from Tamil Nadu that has shown an interest in ISL is the Sun Group -- which controls SpiceJet Ltd and Sun TV Network Ltd.

It has bought the rights to the team from Bengaluru, formerly known as Bengaluru.

The group is also the owner of IPL Franchise.

The most expensive city to be won was the Kolkata team, which was won for approximately Rs 18 crore (Rs 180 million).

India cricketing legend Sachin Tendulkar, along with PVP Ventures, had won the bidding for the Kochi franchise.

Another former Indian cricketer, Sourav Ganguly, along with a group of Indian businessmen and La Liga side Atlético Madrid, had won the bidding for the Kolkata franchise.