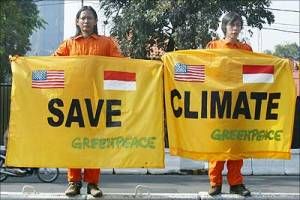 Asserting that it has been a strong champion of equity, India on Thursday said developed countries should compensate developing nations for the effects their greenhouse gas emissions have had on climate.

Susheel Kumar, interim head of the Indian delegation, said India's goal on adaptation during the UN climate change summit talks here is for it "to be there in the entire text."

"We would also like a long-term global goal for adaptation to be clearly articulated in qualitative and quantitative terms." Kumar said, adding that "for a developing country, adaptation becomes a more immediate need (than mitigation)."

Ministerial-level talks will begin next week which will be attended by Environment Minister Prakash Javedkar on December 7.

"India has always been a strong champion for equity," Kumar said. India would like developed countries to compensate developing nations for the effects their emissions have had on climate.

India believes that developed countries should be held responsible for their high levels of emissions which have caused harm to developing countries, like itself. That responsibility should come in the form of compensation and a fair 2015 Paris agreement.

He explained that it is "not equitable to talk about what a country is emitting now" because that country could be currently reducing their emissions.

However, Kumar said that fact "does not absolve them of all (past) sins."

He also referred to the Germanwatch's Global Climate Risk Index 2015, a study measuring which countries suffer from the most extreme weather-related events based on data from 1994-2013, as a way to quantify adaptation.

India ranks third behind the Philippines and Cambodia in vulnerability but the index does not take into account India's much larger population compared to the other two countries.

Along with state climate action plans submitted by 29 states to the Parliament, Kumar also mentioned the efforts of the government through the National Adaptation Fund, the goal of which is to provide capacity building, technology and financial support to domestic adaptation projects.

"It is already the time for negative emissions from developed countries," Kumar said during a meeting with the press and civil society conference attendees.

India's position is that no country's right to development should be circumscribed and that the developing world must carry a unified voice over the course of the Lima talks if there is any hope for an equitable agreement, he asserted.

Currently, adaptation talks are progressing but text-based negotiations have not begun as yet as countries are still trying to determine what they will put forth in their final papers.

India's Intended Nationally Determined Contribution (INDC) will likely not be ready until June 2015. The government plans to put forth a national plan lasting not less than 10 years, but preferably 15 years.

India is opposed to any international review of its INDC before the end of specified timeline of 10 or 15 years.

That "would take away the 'nationally determined' part of the INDC concept," Kumar said.

Meanwhile, the World Meteorological Organisation (WMO) has declared 2014 as the hottest year on record.

The urgency in the conference halls in Lima was heightened by the WMO announcement as the overarching goal of the talks is to keep global warming to 2 degrees Celsius.

Land and sea global average temperatures as well as sea levels for the first ten months of this year are the highest ever recorded.

The WMO claims are based on data gathered from the US National Oceanic and Atmospheric Administration and the UK's Met Office.

WMO Secretary-General Michel Jarraud said in a statement that "record-high greenhouse gas emissions and associated atmospheric concentrations" are to blame for heat, rainfall, drought and devastating floods across the world, including in India in August and September.

Jarraud explained that the majority of that heat is concentrated over the oceans, especially in North America.

The data follows the trend of steadily increasing temperatures alongside increased burning of fossil fuels, with WMO saying 14 of the 15 hottest years record are all in the 21st century.

Even as the US, China, and EU have announced emissions reductions targets, the world's third largest emitter India is yet to make a similar statement.

Mythili Sampathkumar in Lima (Peru)
© Copyright 2021 PTI. All rights reserved. Republication or redistribution of PTI content, including by framing or similar means, is expressly prohibited without the prior written consent.