News
Business
Movies
Sports
Cricket
Get Ahead
Money Tips
Shopping
Sign in  |  Create a Rediffmail account
Rediff.com  » Business » 'What I earn is in my real wallet, not an e-wallet I can't even hold!'

'What I earn is in my real wallet, not an e-wallet I can't even hold!' "If my e-wallet company shuts down, what recourse will I have to recover my money?"

Small retailers share with Geetanjali Krishna the many reasons why they are not really loving e-wallets. In their haste to find alternate payment gateways in the post-demonetisation era, Delhi's smaller retailers are realising that going digital isn't going to be the smooth ride they'd expected.

"Initially, when I started using an e-wallet, I expected it to improve my sales, which had flagged considerably after notebandi," says Ghanshyam, a fruit juice vendor in Dwarka. "But that didn't happen. My sales continue to be affected by the cash crunch in the market, perhaps because many of my regular customers don't own smartphones -- without which one can't use e-wallets…"

Lack of good network connectivity is possibly the single biggest problem that e-wallet users are facing. At the Christmas mela last week at ChampaGali, a bohemian hangout in Delhi's Saidulajab near Garden of Five Senses, customers were walking around, waving their smartphones around in a futile attempt to get enough cellphone signals to pay their bills. "Someone just advised me to get a Reliance Jio SIM card, create a WiFi hotspot, and then use my e-wallet," fumed one of them.

At the Mother Dairy in Safdarjung Development Area, customers who wish to pay through Paytm have to walk a couple of hundred yards away from the shop, where cellphone signals are strong enough to scan the retailer code and pay.

Many retailers feel that the cap on e-wallet transactions is unnecessarily restrictive.

At INA Market, dry fruit vendors aver that before the Reserve Bank of India doubled the monthly limit on e-wallet transactions from Rs 25,000 to Rs 50,000, most of them maxed their e-wallets one the first day they used them.

While none of the e-wallet providers are currently charging a wallet-to-bank account transaction, the amount that can be transferred at a time is too small to be viable long term for most retailers. For example, Paytm allows wallet-to-bank account transactions of up to Rs 5,000 daily, and the monthly limit is Rs 25,000. "It means that much of our earnings will have to remain in the Paytm wallet only," says Ghanshyam. He's relatively lucky, for he's been able to buy his raw materials -- vegetables and fruit for juicing -- from a wholesaler who has also begun to use Paytm. Others aver that they're stuck with money in their e-wallets, but can't use it to buy wholesale stocks as they require only cash payments.

Neither can the vendors who have migrated from villages across India use e-wallets to send money home -- for the options of using e-wallets shrink greatly in rural areas.

Unfortunately, small retailers have few other viable options at this time.

In INA Market, entire rows of shopkeepers have applied for point-of-sale (PoS) credit card readers, but the queue is almost as long as that outside ATMs. For itinerant vendors selling low-ticket items, credit card payments are simply not financially viable. In fact, that is why National Association of Street Vendors of India responded to notebandi by immediately creating a training module on e-wallet usage for street vendors.

"It is imperative for our stakeholders to learn about these alternative payment gateways," says Arbind Singh, national coordinator of NAASVI. "Else, they'll face loss of business in the short-term, but also the prospect of permanently losing customers who're going to be forced to shop from bigger retailers who already accept digital payments."

It's not just street vendors who are hastening to adopt alternate digital payment gateways, by the end of this week, all the 798 Mother Diary milk booths and 326 Safal stores across Delhi-National Capital Region will start using Paytm, in addition to the State Bank of India Smart Card currently in use in some of these outlets.

However, before e-wallet majors can make further inroads on, what many have dubbed a captive market created by the government, they need to gain trust and build relationships with vendors. As of now, stories of transactions botched because of high traffic or low network connectivity are currently making many traditional retailers antsy.

"This notebandi is forcing us to rely on relatively new private companies that we don't trust like we trust banks," says Balbir Singh, who has a small export surplus garment kiosk in Sarojini Nagar. "My father didn't even trust banks! All our money was kept under his bed…"

He points out that internet start-ups are notoriously short-lived: "If my e-wallet company shuts down, what recourse will I have to recover my money?" he asks.

Singh is waiting to receive the PoS credit card reader he applied for after November 8, but says he'd rather lose business than follow this brave new trend of embracing e-wallets. As of now, Singh insists on cash from his customers -- and usually gets it. "Obviously, business isn't as good as it normally is at this time," says he. "But I'm satisfied that whatever I earn is in my real wallet -- not an e-wallet that I can't even hold!"

RBI or digital cash players: Who do you trust? IMAGE: Digital wallet companies argue that the RBI has failed to capture all details and that the real picture will be out by the end of December when the whole data gets collated. Photograph: Dominic Xavier/Rediff.com.

It seems like a battle of numbers between the Reserve Bank of India and the world of digital cash players. While the RBI numbers suggest a decline in digital transactions after demonetisation, digital wallet and payment companies argue that the central bank has failed to capture the full universe.

This is how it played out.

RBI gave out the number of transactions and transaction value details of eight prepaid payment instruments (PPIs), which includes mobile wallets, smart cards, online bank accounts for the month of November. It said that the transaction value of top eight players was around Rs 1,320 crore via 59 million transactions during the month.

RBI has counted the e-commerce transactions, while not taking into account the transactions via money transfer, said an analyst explaining the discrepancy between the two sets of data. In fact, RBI footnote at the end of the November data says the figures were a collation for goods and services transactions of top eight players (not specifying names).

The RBI numbers for the previous months of September and October seem to be for the complete digital ecosystem (money transfer as well as e-commerce) and that is why those are higher at around Rs 6,000 crore, according to an industry expert.

"The whole digital money sector is worth around Rs 6,000 crore, out of which Rs 4,500 crore comes via money transfer and the rest through e-commerce. I think the money transfer bit has not been taken into account in the November data,'' said Naveen Surya, Chairman, Payment Council of India and MD, ItzCash.

Even in e-commerce transaction, there has been an increase as the value has gone up from Rs 1,000 crore in October to Rs 1,300 crore in November, Surya added.

Mobile wallet players have also said that the real picture would be out by end of December when the whole data gets collated. "We are surprised RBI gave out this data, this is incomplete. Things are way brighter in the mobile wallet world than the picture painted," said a senior executive of one of the largest digital wallet companies in the country.

Experts also said that there was a rise in the number of transactions in the month of September and October owing to the festive season. The cashbacks and discounts pushed big ticket purchases via mobile wallets, they explained.

After demonetisation, while the number of transactions and users of mobile wallets increased, the average transaction size went down, owing to people being wary of spending and wallets being used to buy smaller ticket size items as cash transactions went down.

However, there were contrarian voices too. Some wallet players warned against the inflated numbers being projected by rival companies and said that the real rise would come in the next six to 12 months.

"The industry has to be careful about throwing out random numbers, we have to be a little cautious. This is a long term opportunity for us and we think the usage of wallet will rise over the next six to 12 months," said Bipin Preet Singh, cofounder of MobiKwik. 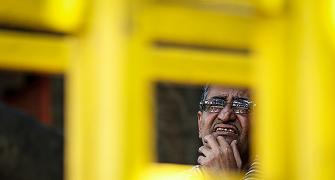