Sri Lanka-born billionaire Raj Rajaratnam's defence team on Wednesday told a US jury that his trading in Goldman Sachs was not based on insider information, but a great deal of research and discussion on the investment bank, especially during the financial crisis. 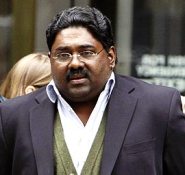 Rick Schutte, former Chief Operating Officer of Galleon Group, founded by Rajaratnam, said there was no information exchanged during a lunch with Goldman president Gary Cohn on July 31, 2008 and his boss.

"No," Schutte said when defence lawyer Michael Star asked if there was any talk of insider information.

The government has played secretly recorded phone conversations between Rajaratnam, 53, and his sources who allegedly provided him with confidential information.

The defence is trying to establish that Rajaratnam's trade was based on research, knowledge of the market, and information already available in the public domain.

The government's last witness FBI agent James Barnacle Jr. testified that Rajaratnam had made more $ 63 million from confidential information he received from insiders.

Out of 26 people arrested in the case, 19 have pleaded guilty. Rajaratnam, who is charged with 14 counts of conspiracy and securities fraud, denies wrongdoing.

If found guilty, he faces up to 20 years in prison. The government also called the head of Goldman Sachs, Lloyd Blankfein, as a witness in the case of Rajiv Gupta, a former director at the investment bank, who is accused of passing insider tips to Rajaratnam about the firm planning to acquire Wachovia or the American International Group.

Schutte said that during the lunch they discussed the possibility of Sachs acquiring a commercial bank, which had a larger deposit base.

"Wachovia was an obvious example to bring up," he said, pointing out that it was headed by Robert Steel who previously worked at Goldman Sachs.

Schutte said that "strength and stability" of the financial services market was discussed "routinely" in 2008.

The prosecution has said that Rajaratnam bought a lot of Goldman Sachs stock after being tipped off by Gupta that Warren Buffet's Berkshire Hathaway Inc. was going to invest $ 5 billion.

Starr, however, built that case that Rajaratnam traded on Goldman Sachs in September since he expected the investment bank to be boosted by TARP, the government's bailout program.

"TARP would have been good for Goldman," Schutte told the jury.

Starr also made the argument that Rajaratnam's decision to sell Goldman Sachs stock was influenced by the firm's $ 7 billion investment in the Industrial and Commercial Bank of China being in trouble, and the firm was also expected to lay off 10 per cent of its employees.

"It signifies issues at the company." Judge Richard Holwell yesterday rejected the prosecution's objection about the defense presenting as a witness, Geoffrey Canada, whose Harlem Children's Zone has received contributions from Rajaratnam.

Judge Holwell said that the defense could try to establish Rajaratnams generosity since the prosecution had already called him greedy.

Betwa Sharma in New York
© Copyright 2020 PTI. All rights reserved. Republication or redistribution of PTI content, including by framing or similar means, is expressly prohibited without the prior written consent.