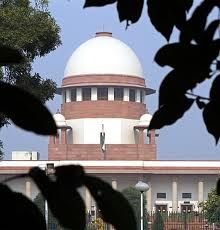 The Supreme Court on Friday granted one week's more time to the Centre to set up SIT under its former judge M B Shah to monitor all black money cases as per its direction.

A vacation bench of justices B S Chauhan and A K Sikri granted time as the deadline fixed by the apex court for constituting the SIT expired on Thursday.

The bench also directed that all documents relating to black money must be kept in safe custody of secretary-level officer of revenue department after the petitioner senior advocate Ram Jethmalani alleged that some of the 'vital' documents were destroyed in a fire at Shastri Bhawan.

Solicitor General Mohan Prasaran, however, refuted Jethmalani's claim, saying all documents are kept at north block and not at Shastri Bhavan.

The apex court on May 1 directed the Centre to handover within three days all documents and information collected by it in its probe in the cases of alleged stashing of black money in LST bank in Liechtenstein, Germany, to Jethmalani and others who raised the issue before it.

It had directed the Centre to issue notification regarding their appointment of SIT within three weeks.

Justice Shah, who was earlier appointed as Vice Chairman by a July 4, 2011 order, will take place of former apex court judge B P Jeevan Reddy, who expressed his inability to continue as Chairman due to personal reasons.