India's goal of self-reliance has been paramount in the policy and practice of the country. The COVID-19 crisis gave us lessons on how to speed up efforts in that direction, he said. 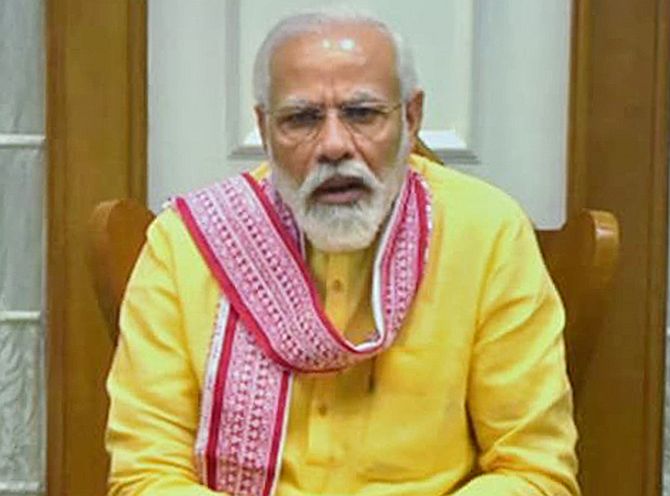 Insisting that the COVID-19 crisis should be turned into an opportunity to create an 'Atmanirbhar Bharat', Prime Minister Narendra Modi on Thursday said this is the time to make bold decisions and investments.

Addressing the 95th annual plenary session of the Indian Chamber of Commerce in Kolkata through video conference, he said, steps have to be taken to ensure that products imported from abroad are manufactured in the country.

"In the last five-six years, India's goal of self-reliance has been paramount in the policy and practice of the country.

“The COVID-19 crisis gave us lessons on how to speed up efforts in that direction...This is not the time for a conservative approach; this is time for bold decisions and investments.

"This also is the time to move from command and control economy to plug-and-play and to build a competitive global supply chain." he said.

While noting that people-centric, people-driven and planet-friendly development has become part of the BJP-led Central government's way of governance, the prime minister said recent decisions by the Centre had freed the farmers and rural economy from years of "slavery" as they now have the freedom to sell their produce anywhere in the country.

"India is fighting multiple challenges along with COVID-19, including floods, locust attack, earthquakes...We have to turn crises into opportunity for creating an Atmanirbhar (self-reliant) Bharat and take steps to ensure that products which we import from elsewhere are manufactured in India," Modi said.

Quoting Swami Vivekananda, who had once written that Indians should produce for themselves and find markets in other countries, the prime minister said they had for long wished that the country to become self-reliant in areas like medical equipment manufacturing, defence manufacturing, coal and minerals, edible oils and many more.

Lauding the resolve of the countrymen to turn disaster into opportunity, the prime minister said the pandemic "will be a turning point of the country".

The prime minister also said that the country has already ushered in several reforms like changing the definition of MSMEs, decriminalising certain things (under the Companies Act), introducing Insolvency and Bankruptcy Code, bringing in more competition in coal mining, altering the APMC and the Essential Commodities Act.

Modi said that time has come to revive Bengal's pre-eminence in manufacturing.

"It is the government's initiative to help the east and the north-east where Kolkata can emerge as the fulcrum....to lead the entire development process," he added.

He also urged MSMEs to enter the solar energy sector.

Modi said banking services have now reached the "have nots".

Initiatives such as Jandhan and Aadhaar have made it possible to reach necessary support to millions of people without leakage.