Much of the rural recovery story is based on the premise of agriculture doing well. Even if it clocks a growth of 2.5-3 per cent this year, it is still just around 15 per cent of the overall GDP.

The non-farm sector, which constitutes a bigger portion of the overall rural economy, is now hampered by disruptions and lockdowns. 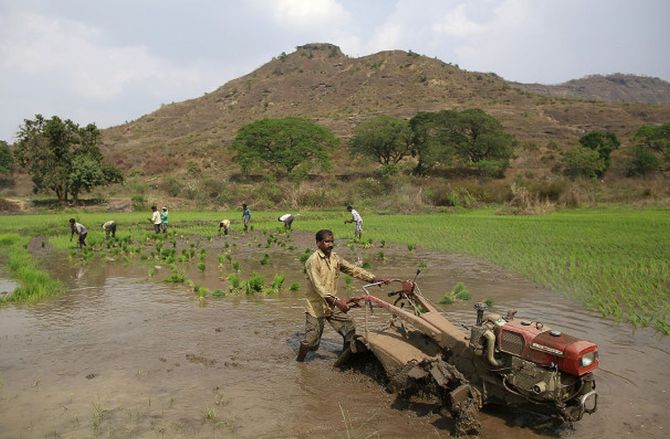 The often-repeated theory of demand generation in the rural economy due to the government’s intervention may be overstated, feel economists, even though they cite different reasons for their thesis.

A recent note brought out by Credit Suisse says that net gain from the government support measures may be just Rs 7,500 crore a month, which constitutes 0.9 per cent of the rural gross domestic product (GDP).

It says Rs 35,000 crore of the fiscal support a month is offset by Rs 27,500 crore per month decline from lower remittances, weak agri-perishables and low farm credit growth.

However, Pronab Sen, who is now the country director of International Growth Centre (IGC), said the offsetting factors that reduce gain from the government support measures would have anyway been there due to coronavirus (Covid-19).

“We have to see what the offsetting factors are.

"Remittances would have gone down anyway after Covid-19.

"Had government support not been there, the situation in the rural areas would have been worse,” said the former chief statistician.

But to expect recovery from these measures to spill over to the urban areas is overstated, he said.

Besides, agriculture prices are holding on as of now, but they may decline in the coming months, affecting farmers’ income, he added.

Ashok Gulati, Infosys chair processor for agriculture in think-tank Indian Council for Research on International Economic Relations (ICRIER), said the whole rural recovery story needs to be looked at from a different perspective.

“First and foremost, the rural economy wasn't down and out unlike other sectors as production was happening and there was a semblance of demand as well because people won’t stop eating even during lockdowns,” he said.

Though the bulk demand from hotels and restaurants wasn't there, household consumption didn't go down by much, he said, adding that perspective demand compression wasn’t as severe in agriculture as it was in other sectors.

Secondly, he said procurement was good this year and led to almost Rs 70,000 crore-Rs 75,000 crore being passed on to the hands of farmers in a few states during the lockdown months.

This is reflected in increased sales of fertiliser, seeds and tractors.

However, there is another part to the story, which is from the point of migrants, said Gulati.

Returning migrants, who were earning say somewhere between Rs 10,000 and Rs 15,000 per month in cities were forced to go back to their villages and work in fields or under MGNREGA at much lower wages.

So, the income of those families went down.

“In rural areas, where landholding isn't big enough, most families have one or two of their members working in cities.

"Income of those families from remittances didn't go up.

"While agriculture incomes may have remained static, families had to absorb this loss of additional income from remittances which put added pressure on them,” he said.

So, in short, recovery in the rural economy isn't there as it never went down.

Also, agriculture wages haven't improved as excess labour is being adjusted in the fields.

“On the whole, I feel there is nothing to be very proud about the rural recovery, but at the same time nothing to feel gloomy about as well,” Gulati added.

CARE Ratings chief economist Madan Sabnavis said prices of farm produce will come down in the markets for kharif crops because of very good monsoon conditions.

There will be excess supply and the government would not be able to procure more than what it can, he said.

Besides, the minimum support price (MSP) has not been increased substantially and is in the range of 4-5 per cent.

“Even if total income goes up in the rural sector, per capita income of households will come down as there are more hands because of migrants.

"The area under cultivation has increased and people are sowing more. This will affect consumption,” he said.

The area of major kharif crop sowing in the country increased by 18.5 per cent by the third week of this month over the corresponding period of the previous year, according to the latest data available with the ministry of agriculture.

Much of this rural recovery story is based on the premise of agriculture doing well, he said, adding that even if it clocks a growth of 2.5-3 per cent this year, it is still just around 15 per cent of the overall GDP.

The non-farm sector, which constitutes a bigger portion of the overall rural economy, is now hampered by disruptions and lockdowns, he said.

“Rural wages will continue to remain under pressure for some time to come because construction hasn't picked up yet,” added Dev.

The jump in tractor and two-wheeler sales, along with fast moving consumer goods (FMCGs), in June, may be due to pent up demand which could not materialise due to the lockdown.