Why migrant labourers have little choice but to head home

Around 81 per cent of the workers constitute the unorganised sector - devoid of any social security cover and outside the purview of a complex set of labour laws. Sitting on a bicycle in New Delhi’s Okhla Industrial Area, Durga Prasad, 34, made a call to his family living 70 kilometers away in Uttar Pradesh’s Bulandshahr to say he was headed back home as his garment manufacturing unit was closing down for the next 15 days.

This was on Saturday, a day before the Delhi government had announced an official lockdown in the national capital.

"I resigned after my employer refused to pay me for these 15 days," Prasad says.

“If the virus spreads further, it would leave me exposed without an earning. I am headed home.”

A worker like Prasad, who plays a dominant part in the country’s 471-million workforce, never felt more vulnerable.

Around 81 per cent of the workers constitute the unorganised sector - devoid of any social security cover and outside the purview of a complex set of labour laws.

Indeed, coronavirus has hit the labour force hard like never before.

In India, social security cover is no less than a privilege for workers.

Unlike countries such as South Africa, which follow a right-based approach giving social security to everyone who joins the workforce, India sticks to an   employment-based approach.

The coverage of social security is limited to units that employ a minimum number of workers.

For instance, workers get compulsory health and other forms of insurance if they are employed in a unit employing at least 10 workers (through the Employees’ State Insurance Corporation).

Workers are entitled to provident fund benefits only if they are working in an establishment with 20 workers or more (managed by the Employees’ Provident Fund Organisation).

Now, in India even that is rare.

According to the latest Economic Census of 2013-14, 98.6 per cent of all the establishments in India employ less than 10 workers.

This means workers belonging to all such establishments barely had any social security cover.

Prasad belonged to this 98.6 per cent of the work segment.

Prime Minister Narendra Modi announced a nationwide 21-day lockdown on March 24 - when 30 out of 36 states already had it in place as a measure towards social distancing to contain the spread of the virus.

Maharashtra was among the first states to announce a complete shutdown till March 31.

The visuals of scores of migrant workers thronging the railway stations to return home sent panic waves in the power corridors.

As such, India has kept no official count of the total migrant workers.

But in Parliament, the Labour and Employment Minister Santosh Kumar Gangwar has repeatedly cited the Economic Survey of 2016-17 to state that there were an estimated 100 million migrant workers in 2016 across the country - a fifth of the total workforce.

As the economy picked up speed over decades, the pace of migration also exploded.

With public transportation system grinding to a halt for the next three weeks, millions of migrant workers now have no option to remain in the cities of their workplace.

In fact, there’s hardly any choice before them on how to isolate themselves from the deadly virus.

Twenty-six-year-old construction sector worker Pintu Singh had found his corner in shade outside the New Delhi railway station where he was sitting in company with other stranded workers due to the lockdown.

On March 22, the day of the ‘janta curfew’, Singh left hurriedly from Rewari in Madhya Pradesh to travel back to his village in Champaran, Bihar.

While he managed to board a train, all fresh train services were curbed and he couldn’t get into a second train for Bihar from New Delhi when he arrived on March 23.

“I left behind all my belongings. I was supposed to get Rs 7,000 from my contractor but didn’t even bother to take it.

"The contractor wasn’t allowing us to leave and assured he will give us food but no salary.

"I want to stay with my family in these times,” Singh said, who earns Rs 600 a day and left his workplace with Rs 2,000 as cash in his pocket.

The government has urged employers to allow workers to ‘work from home’, not to reduce their wages and appealed to citizens to take care of their domestic helps even if they do not report for work.

Undoubtedly, the appeal for ‘work from home’ will protect workers who are receiving regular salaries in a better way.

Working from home is not music to the ears for 30-year-old Zeenat who used to work in a garment factory in Seelampur with Rs 6,000 as monthly pay.

Her employer refused to give her paid leave and the fact that she doesn’t even have a work contract left her with no option but to try and go back to her village in Uttar Pradesh, as making ends meet in a city with no income in sight was impossible for her.

“I haven’t even received my salary for the past three months,” she said, sitting with her family near the Anand Vihar bus station, in hope that she will find a mode of transport to commute.

Like Zeenat, over two-third of workers in India employed on a regular salary do not have a written contract, according to the official periodic labour force survey conducted by the National Statistical Office in 2017-18.

With no written contract, where the employment terms are clearly stated, workers like her are exposed to being terminated or laid off or asked to go home without any pay and the government will hardly be able to keep a tab.

With companies downing shutters on their units and no business prospect in sight, businesses will be compelled to retrench or lay off (the difference being that in the latter case, employees may be asked to leave temporarily, without the company passing on any monetary benefits).

The Industrial Disputes Act of 1947 lays down the ground rules for companies to follow in case they want to retrench workers in the formal sector.

In India, companies employing less than 100 workers are free to retrench workers, which mean most of them, and the government doesn’t have the authority to intervene.

In fact, in many states like Rajasthan, Uttar Pradesh and Madhya Pradesh, companies with a workforce of up to 300 can retrench without government’s permission (since the State governments can frame their own labour laws, too).

But these rules do not apply to the services sector at all as it only covers the manufacturing, plantation and mining sectors.

If companies lay off, they have to pay 50 per cent of the wage to workers for 3 weeks.

But companies employing less than 50 workers do not have to pass on this compensation.

What will add to the pain of the workers are some of the archaic provisions in the labour laws.

For instance, In India, for termination of an employee who has a prolonged illness will not require companies to pay up retrenchment compensation.

Other workers (if they qualify under the threshold-based norms) get retrenchment benefits to the tune of 15 days work every year to the total number of year worked.

How adequate are the medical facilities for the organised sector workers?

As mentioned earlier, establishments hiring at least 10 workers are covered under the ESI scheme, which involves equal monetary contribution from employers and employees.

ESI is the largest contributory health insurance in India and one of the largest in the world, covering about 86 million beneficiaries and principals currently in the low-income formal labour market, according to a Niti Aayog report.

But the ESI medical infrastructure is in shambles.

There are 0.6 hospital beds per 1,000 beneficiaries, according to its annual report, out of a total of 159 hospitals and 1,442 dispensaries at present.

Despite this shortage, the average bed occupancy in these facilities at an all-India level is 52 per cent and this is primarily because a shortage of manpower.

The total number of vacant posts of paramedical staff stood at 11,222.

The government is planning to earmark 15 per cent of ESI beds for the COVID-19 isolation cases.

And as is the case in other hospitals, the ESI facilities will be out of bounds for routine health checkups of workers during the pandemic, leaving them more vulnerable to other diseases they may contract in this period.

On Tuesday, Labour and Employment Minister Santosh Kumar Gangwar wrote to chief ministers of all the state, directing them to transfer cash to construction workers from unutilised cess fund totaling around Rs 52,000 crore.

The states maintain their own funds and a list of construction workers and identifying them would not be a major issue.

Already, Punjab Chief Minister Amarinder Singh had declared an immediate relief of Rs 3,000 to each registered construction worker in the state, Delhi will give Rs 5,000 each and Himachal Pradesh will also provide one-time relief of Rs 1,000 to such workers.

But Annu, a construction sector worker, will not be eligible for the benefit as he was hired through a contractor and doesn’t have an official identification card under the Building and Other Construction Workers’, Act 1996 to make him entitled for this benefit like other 3.5 million registered construction workers.

Annu, who belongs to Panna in Madhya Pradesh, has been working in Delhi for almost a decade shifting his base from one construction site to the other.

On Wednesday, he spent the fourth day on the road.

Now, he has extinguished cash, even as his belongings were stolen as he slept on a footpath near the Sarai Kale Khan bus station.

“I have spent last two days near the railway station and it’s a real struggle and more for my wife than me. Will I be able to go back?” he asked. 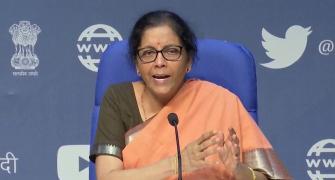 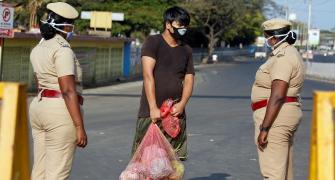 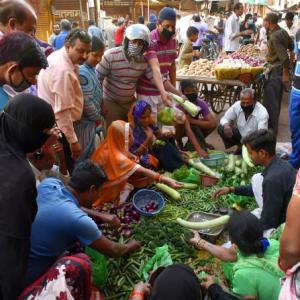