The rate of unemployment was the highest in the urban areas, which constitute the most number of red zones due to the COVID-19 cases, at 29.22 per cent, as against 26.69 per cent for the rural areas. 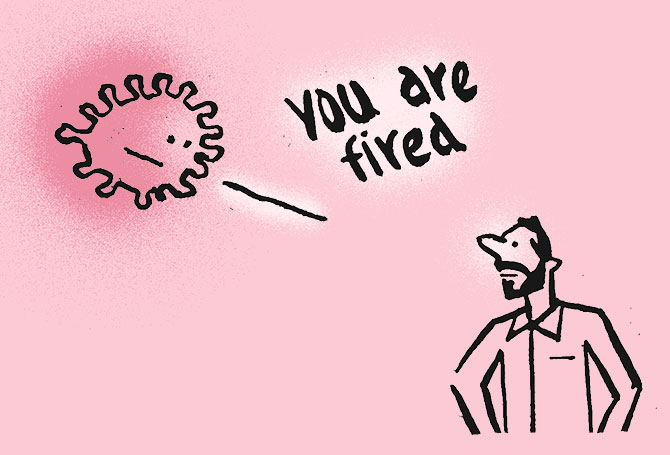 The COVID-19 crisis has led to a spike in the country's unemployment rate to 27.11 per cent for the week ended May 3, up from the under-7 per cent level before the start of the pandemic in mid-March, the Centre for Monitoring Indian Economy (CMIE) has said.

The Mumbai-based think tank said the rate of unemployment was the highest in the urban areas, which constitute the most number of red zones due to the COVID-19 cases, at 29.22 per cent, as against 26.69 per cent for the rural areas.

Analysts have been warning about the spectre of unemployment ever since the country was put under a lockdown on March 25 by Prime Minister Narendra Modi to arrest the spread of the virus infections.

Scenes of migrants fleeing urban centres like Delhi and Mumbai only confirmed the long-held concerns on their employment as the economic activity came to a grinding halt.

The government has so far announced income and food support to the vulnerable people as part of a Rs 1.70 lakh crore fiscal stimulus to the economic, financial and possibly humanitarian crisis, and is also mulling a second round of measures soon.

The US has seen a huge spike in unemployment as over 26 million people have claimed state support because of losing their jobs.

Experts often rue the absence of a good gauge of jobs in India, which is predominantly an unorganised-sector led economy.

CMIE's weekly series of data pointed to a steady increase in unemployment since the start of the COVID-19 pandemic in India, with the week to March 29 showing the sharpest spike to 23.81 per cent.

As per CMIE's data, the monthly unemployment rate in April stood at 23.52 per cent, up from March's 8.74 per cent.

As of the end of April, Puducherry in South India had the highest number of unemployment at 75.8 per cent, followed by neighbouring Tamil Nadu 49.8 per cent, Jharkhand 47.1 per cent and Bihar 46.6 per cent.

Maharashtra's unemployment rate was pegged at 20.9 per cent by the CMIE, while the same for Haryana stood at 43.2 per cent, Uttar Pradesh at 21.5 per cent and Karnataka at 29.8 per cent.

Hilly states had the lowest incidence of unemployment as of April, the think tank said, pointing out that the rate in Himachal Pradesh stood at 2.2 per cent, Sikkim at 2.3 per cent and Uttarakhand at 6.5 per cent.