National oil companies are staring at inventory losses as they have to bring down refinery throughputs because of the plunging demand for fuels following the nationwide lockdown to contain the deadly coronavirus infection. 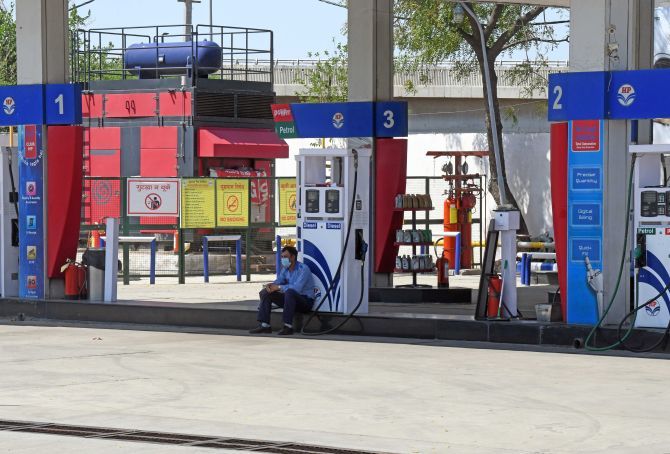 IMAGE: A petrol pump worker waits for customers at a fuel station in New Delhi during the 21-day nationwide lockdown to check the spread of coronavirus. Photograph: R Raveendran / ANI Photo.

India is the world's third-largest energy consumer but the lockdown has shut businesses, suspended flights, stopped trains and brought almost the entire vehicular movement to a halt, impacting fuel demand.

For the full the month of March, total retail volume has come down by 17 per cent, led by a 26 per cent dip in diesel demand and a 17 per cent fall in petrol while the demand for aviation fuel is down 33 per cent, according to the national data shared by IOC on a year-on-year basis.

The only fuel that saw a demand spike in the month was cooking gas and that, too, after panic buying since the national lockdown. Overall, LPG demand rose 1.7 per cent in the month, according to the IOC data.

There are 27.59 crore active LPG customers in the country.

All the national companies have seen a massive spurt in demand for the cooking fuel as people resorted to panic buying, leading to an average 40 per cent rise in demand in the first week of the lockdown.

While IOC, which controls more than 50 per cent of the market, did not share its sales data, both BPCL and HPCL have said their diesel and petrol sales have fallen by over 55 per cent.

HPCL chairman Mukesh Kumar Surana told PTI that the refinery throughput has come down to around 70 per cent.

“While the Vizag refinery is running at full capacity, the same at Mumbai is only around 80 per cent,” he said.

From the demand side, he said even though all the filling stations are open there is hardly any demand. While diesel demand is down 40 per cent as trucks are off the roads, petrol demand has more than halved as people remain indoors because of the lockdown. Only emergency service vehicles are on the roads. There is practically no demand for ATF too, he said.

R Ramachandran, the refinery director at BPCL, has the same thing to narrate. While refineries are running at under 70 per cent, from the demand side the story is more disappointing.

“Our diesel and petrol sales are down over 60 per cent and there is virtually no demand for ATF as only a few cargo flights are operational,” he told PTI.

However, he expects diesel demand to improve as more trucks come on the roads to deliver essential goods and ecommerce deliveries join them as the lockdown remains in force.

But the companies are fearing inventory losses due to the massive plunge in demand.

Though the company has only minimal inventory level, Ramachandran said, “Losses are sure for the month and April and going forward if the lockdown extends.”

However, the HPCL chairman sounded a bit more confident of managing inventory as he looks to export some fuels if the lockdown gets extended.

Surana also said, “HPCL being a net buyer of refined products, we are regulating our throughput so that we can avoid shutdowns and the resultant inventory losses.”