Hyundai Motor and Toyota Kirloskar Motor have announced the suspension of manufacturing operations at their respective plants amid coronavirus outbreak. 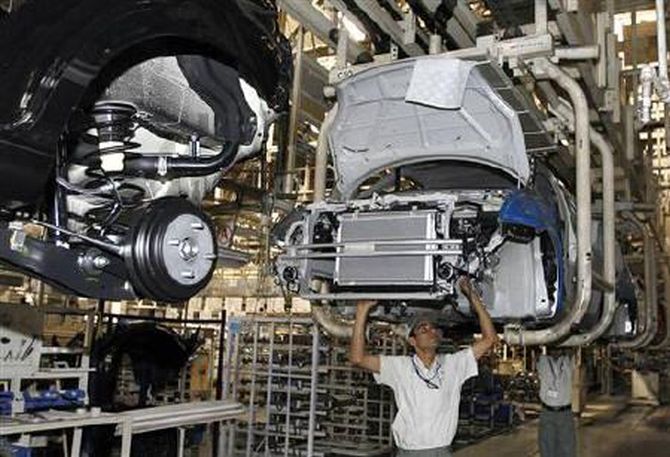 Amidst coronavirus outbreak, Toyota Kirloskar Motor, Kia Motors and BMW on Monday announced temporary suspension of production activities at their respective manufacturing facilities in the country.

Hyundai Motor India, Renault and General Motors, too, decided to halt manufacturing in order to contain the contagious disease.

Similarly, Suzuki Motor Gujarat, which manufactures cars on contract basis for Maruti Suzuki India, also announced suspension of production at its Gujarat-based plant to check the spread of COVID-19.

Kia, Hyundai, Toyota Kirloskar Motor (TKM) and Renault said they were halting production till further notice, while BMW said it is suspending manufacturing till March 31, 2020.

"In view of the unprecedented situation arising out of the spread of COVID-19 and keeping in mind the safety and well-being of all our consumers, employees, workers, partners, and associates pan India, the company has decided to suspend all its operations with immediate effect," Kia Motors India said in a statement.

With this, the company's manufacturing facility in Anantapur (Andhra Pradesh) and company office premises will stop functioning until further notice, it added.

Hyundai said it has decided to halt production at its Chennai plant, while TKM has put brakes on manufacturing at its Bidadi facility in Karnataka.

"The company will be taking the preventive counter-measure of suspending its manufacturing operations at the Chennai facility from March 23 till further notice to stop the spread of coronavirus (COVID-19) - a global pandemic," Hyundai Motor India said.

TKM said that keeping the safety of employees as the top priority, the company has voluntarily decided to temporarily halt production in its plant in Bidadi, Karnataka till further announcement.

Similarly, BMW Group India said local production at its Chennai plant has been stopped till March 31, 2020.

General Motors said it has suspended production at its Talegaon manufacturing facility in Maharashtra from March 21 to March 31 in support of government efforts to prevent the spread of COVID-19.

On Sunday, Maruti Suzuki India, Honda Cars, Mahindra & Mahindra and Fiat had announced a temporary halt in manufacturing operations at their respective facilities.

In two-wheeler segment, TVS Motor Company said on Monday that it has decided to halt all manufacturing operations at its plants in India and Indonesia till further notice.

Similarly, India Yamaha  Motor said it has taken preventive counter-measure of suspending its manufacturing operations at its facilities in Chennai, Surajpur (Uttar Pradesh) and Faridabad (Haryana) till March 31, 2020.

The suspension is in view of precautionary measures taken in the wake of the COVID-19 pandemic and in line with the state governments' directives, the companies have said.