Indian Railways and the case of privatisation

'So far, the private sector's participation in railways has been muted in India, compared to sectors like ports, telecom, electricity, airports and roads.' 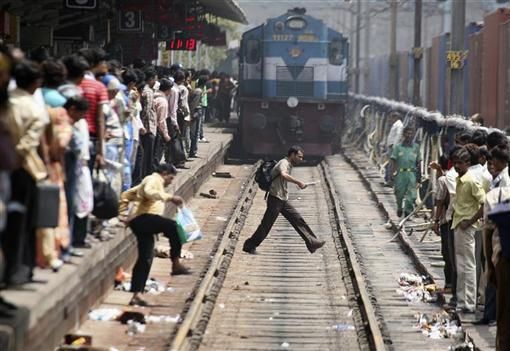 Image: Indian government is in the process of formulating new policy to streamline private investment in the sector. Photograph: Amit Dave/Reuters

The Bibek Debroy Committee, which was set up to suggest ways to mobilise resources for the Indian Railways and restructure the Railway Board, has favoured privatisation of rolling stock: wagons and coaches.

This has given rise to the impression that private companies will soon be permitted into profitable operations, while the public sector struggles to maintain the required infrastructure.

In his report, Debroy has looked at the railway restructuring experiences from multiple countries, including Japan, the United Kingdom, Germany, Sweden, Australia and USA.

He says in these countries, which opened up to competition, the entry of competitors lowered prices and led to better services.

"The key lesson from the UK is to retain the rail-track and infrastructure as a publicly-owned monopoly, while opening up rolling stock operations for passengers and freight to the private sector," Debroy has said in his 323-page report.

Thus, he recommends following the key features of various international models with focus on the British experiment to achieve two main aims: changing the institutional structure between the government and the Indian Railways and increasing competition.

Most of the other recommendations follow from these. It has said it is imperative to split the three roles of policy making, regulation and operations.

Ultimately, it suggests unbundling Indian Railways into two independent organisations: one responsible for the track and infrastructure and another that will operate trains.

It has suggested setting up a company which will own the railway infrastructure.

"Provision needs to be made for open access for any new operator who wishes to enter the market for operating trains with non-discriminatory access to the railway infrastructure and a level playing field," the panel has said.

It has also recommended amending the Indian Railways Act to allow the private operators to levy tariff.

In other words, instead of being fixed by the Indian Railways, fares will be decided by the market. A senior rail ministry official says segregation of infrastructure and operations has been done the world over.

"It leads to simplification of cost recovery for the money spent by the government in setting up the infrastructure. It would be profitable as the government would charge the operator."

He adds that in case the infrastructure becomes profitable, there is no bar on the government to have its own operator in the interest of competition.

This is what is happening in container business where the government has its own operator, CONCOR, in addition to 15 other private operators.

"The problem is that currently, there is no competition as both maintaining the infrastructure and running the operations are done by the government. Similar segregation has worked well in the aviation sector," he says.

The other side But the British Railway has its share of critics.

In a recent research paper, An illusion of success:

The consequences of British rail privatisation, Manchester University scholar Andrew Bowman has shown how rising passenger numbers, increased profits and inflated franchise payments to government enabled the train operating companies to argue that privatisation has been successful and delivered on its promises.

Alongside vague assurances about competition, management freedom and increasing the focus on customers' needs, a significant measurable promise was the (eventual) total transfer of costs and financial risks to the private sector, he said.

"The system of rail privatisation set out in Britain has achieved almost the exact opposite."

"The state has been burdened with the financial risks and costs of the rail infrastructure. Meanwhile, the system of accounting creates artificial profitability in an activity that would otherwise be entirely uneconomic for the train operating companies."

So far, the private sector's participation in railways has been muted in India, compared to sectors like ports, telecom, electricity, airports and roads.

Several attempts have been made in the past to involve the private sector in wagon procurement and leasing, freight trains and container operations, terminals and warehousing facilities, catering services, and other rail infrastructure through schemes framed by the ministry.

What are the lessons to be learned from these mostly failed efforts?

High costs and lower returns, policy uncertainty, absence of a regulator to create a level playing field, the lack of incentives for investors and procedural or operational issues have significantly restricted private sector participation.

Consider, for instance, the wagon investment schemes. The Own Your Wagon Scheme was launched in1992 to tap the private sector for augmenting wagon supply.

Under the scheme, private sector firms could procure wagons either through Indian Railways or directly from approved wagon builders, own them and lease them to the railways. In return, they would be paid an annual lease charge.

In 2008, yet another scheme was launched to introduce the concept of leasing of railway wagons. Despite several amendments, these schemes did not achieve success.

The ministry has organised at least three large investor meets apart from overseas roadshows in the past eight months to sell projects worth Rs 90,000 crore.

But is there enough corporate interest?

Most investors in these meets have complained of a lack of permanence in policy governing privatisation but there is no dearth of interest, according to the ministry.

"Indian Railways have informed us of the new policies that have been finalised. We are keen (to invest) and are watching the developments in railways sector," said an executive of a private company who did not want to be named after one such investor meet recently.

He added that there is an attempt to correct the imperfections in earlier policies on private participation.

Separate suburban services and run them as joint ventures with state governments.