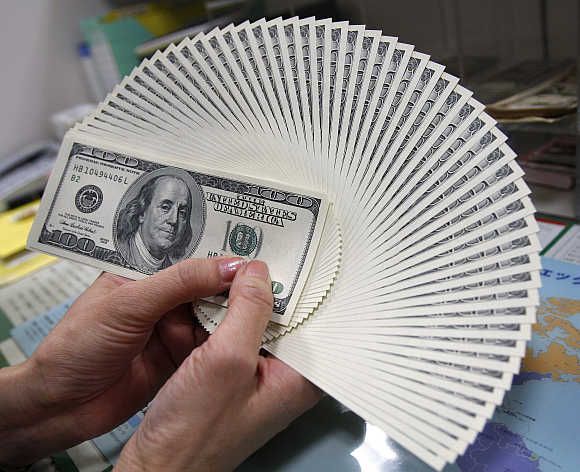 The gold and silver that Indians imported last year, for reasons other than re-exporting as jewellery, was about $25 billion.

They preferred investing in gold to alternatives like putting money in productive assets. Meanwhile, the value of Indian debt bought by foreigners last year was about $30 billion. These trends have continued into the current year; indeed gold imports quantities have gone up as prices have fallen.

So we have been taking debt from the rest of the world, and spending most of the dollars so brought in to import gold. Not a very clever thing to do, is it?

The flip side of this equation is that, even as companies raise funds by selling debt paper overseas, banks in the country complain that companies don't look to them for finance; that there is no demand for credit.

Domestic credit growth, at 10-11 per cent, is the slowest in all years other than the crisis year of 2009; indeed it may be slower than the growth in nominal gross domestic product (which is real growth plus inflation).

The explanation for these aberrations - "aberrations", because they are not sustainable - is that the world is awash in cheap money. Record sums out of the excess liquidity have come into India as debt paper because this country has attractive interest rates.

The same high interest rates at home are what encourage companies to access cheaper capital overseas. Meanwhile, some of the money flowing in has gone into equity, and boosted share prices to unsustainable levels.

The inflow of cheap capital has also kept the rupee at a high level, making exports uncompetitive and broadening the current account deficit despite falling oil prices. The whole equation helps foreign players, not Indians.

So when commentators write that the fall in oil prices will reduce global cash surpluses and, therefore, reduce foreign money inflows, I would say that it is about the best thing that could happen.
Stock prices are inflated, and need a correction. Also, we should not be encouraging foreign debt when domestic banks can't find credit customers.

As the outlook for cheap money has changed in recent days, the fall in the rupee's value will also make our foreign trade less unbalanced.

Finally, as the inflation rate falls, retail customers might find that financial savings are a better idea than gold.

This view will be seen as "market-unfriendly", and attract criticism from market fundamentalists as well as those who have a stake in driving stock prices higher (company promoters, fund managers - mostly foreign).

To his credit, the Reserve Bank governor, Raghuram Rajan, has spoken out repeatedly about the backwash effects on economies like India's that result from the liquidity-pumping policies of the rich economies.

No one in those economies is going to listen to him. Unlike our experts, the smart guys in those countries don't care more for markets than for the health of their economies and for jobs. So Dr Rajan should take some steps of his own. For a start, he should stop opening the door wider for foreign commercial debt.

Total foreign debt has been climbing by an average of about $40 billion each year, and the share of commercial debt in that has been growing. Four financial years ago, the country's foreign exchange reserves fully covered overseas debt (both were just over $300 billion).

Now the reserves cover barely two-thirds of such debt (which has grown to $450 billion). That ratio is at a safe enough level. However, if policymakers continue to expand the role of foreign debt while reserves grow slowly, red flags will go up at some point.

It is time to signal to companies that they should look more to domestic credit providers, who have cash to lend. The beneficial effects will be felt throughout the system.