Cut down wasteful subsidies that do not reach the poor

The savings would be better spent and might actually reach the poor, says Rahul Khullar, in the second of two articles. 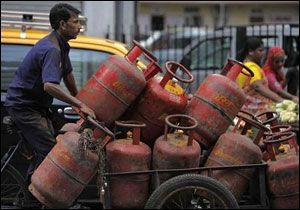 LPG attracts a total subsidy of Rs 22,000 crore. By no stretch of imagination is this for the poor.

Had prices been increased at 10 per cent per annum (the inflation rate since 2010) the price would have been Rs 550 per cylinder today.

In January 2014, the price was Rs 414 per cylinder; it hasn't changed in two years. An upfront increase is clearly in order.

The proposal: Immediately hike the price to Rs 460 per cylinder (a 10 per cent increase); the price should be increased by Rs 5 per cylinder per month starting April 1, 2016.

On food, the subsidy amounts to Rs 1.25 lakh crore.

It has doubled since 2010-11 because of the growing divergence between procurement costs [minimum support price (MSP)] and central issue prices (CIP), an open-ended procurement, higher procurement-linked costs and an expanded coverage.

The CIP for below-poverty-line (BPL) households per quintal are Rs 415 for wheat and Rs 565 for rice.

The estimated economic costs per quintal of the Food Corporation of India (FCI) are Rs 3,000 for rice and Rs 2,200 for wheat. Since 2002 there has been no change in the CIPs.

Today, the subsidy is 81 per cent of the economic cost.

Since 2002, there has been a substantial reduction in the incidence of poverty. If 45 per cent subsidy was deemed sufficient in 2002, what is the justification to raise it to over 80 per cent?

Second, the poor do not live on staples alone. The annual inflation on other items of food has been in the range of 7-12 per cent. Surveys show that even the poorest of the poor spend only 35 per cent of their food expenditure on cereals.

If so, why should the CIPs remain frozen? The National Food Security Act (NFSA) expands coverage to two-thirds of the population.

APL households are also covered, which means prices are to be reduced. Entitlements for the abject poor (Antyodaya) at very low prices are justified. But, not for all BPL households.

And, certainly not for APL households. The Shanta Kumar Committee (hereafter, the Committee) report has correctly argued that the NFSA coverage needs urgent and immediate review.

In the present form, it is unjustifiable, fiscally unsustainable and administratively impractical.

The total procurement-linked costs have also risen. The FCI is carrying larger stocks than necessary; current levels are far in excess of buffer stock requirements.

The Committee has brought out that the procurement system has worked primarily to the benefit of 'big' farmers in the north-western states (and a few other states).

A meagre six per cent of all farmers sell their produce to the FCI. It is, therefore, a myth that the FCI procurement benefits all (or many) farmers.

The Committee has given sensible suggestions on how to reduce these costs. However, at heart, the issue is how to cap total procurement.

The proposal: Increase CIP for wheat and rice to Rs 7.25 and Rs 9 per kg respectively.

This amounts to an increase of four per cent per annum over 2002-15. Announce an increase in the CIP by 25 paisa per kg every month starting April 1, 2016.

Other measures that ought to be taken include no open-ended procurement; cap procurement to meet buffer stock requirements and Public Distribution System (PDS) needs (at most 50 million tonnes); shift procurement to eastern regions; an implicit ceiling on procurement from north-western states (and Andhra Pradesh, Chhattisgarh and Madhya Pradesh).

Surplus states should move to decentralised procurement to meet their own PDS requirements and other suggestions of the Committee should be acted upon within three months.

The savings on subsidies are better spent on reaching the poor with a focus on employment, skills (learning), housing and safety nets and improving rural infrastructure.

Yes, a political vocabulary has to be devised to deliver this message. Mr Prime Minister, who better than you to do that? It is time to get going.

The author is ex-chairman, Telecom Regulatory Authority of India.