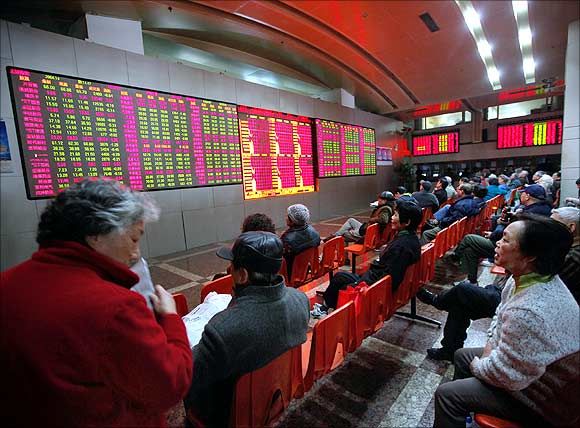 Chinese companies, like retail investors, have until recently been plowing money into the stock market

With Chinese policymakers so far unable to stem a rout in Chinese equities, money is flowing back into government and state-backed bonds -- driving yields lower and potentially easing strains on debt-laden municipal governments.

Yields on the 10-year Chinese treasury bond fell 10 basis points on Wednesday at the open as investors sought the safety of government debt.

Other debt perceived as having strong government backing has also performed well in recent days.

Yields on 5-year policy bank bonds and equal tenor debt from local government financing vehicles are both down around 20 bps since the end of June.

Chinese stock markets have slumped 30 per cent since mid-June.

Nonetheless, there are fewer signs of corporate debt benefiting.

Chinese companies, like retail investors, have until recently been plowing money into the stock market, leaving them exposed to the market crash.

Yields on 5-year AAA rated corporate debt have only fallen seven bps since the beginning of July, compared with double- digit falls for policy bank and LGFV debt.

"Chinese securities companies themselves have a lot of financial asset holdings and when there is a sell-off there will be a big impact on their balance sheets," said Hong Kong based Kingston Lam, Hong Kong-based credit analyst with Credit Agricole.

"If they are using up cash to buy back shares, it will be a further negative," said Lam.

For instance, Evergtrande Real Estate Group raised 15 billion yuan ($2.42 billion) in its second visit to the domestic bond market in less than a month.

"The knock-on effect could be a drop in supply of offshore high yield bond issues. For an issuer it makes perfect corporate finance sense to replace a 12 percent coupon with a 6 percent coupon, even if the tenor is a few years shorter."

Similar announcements have also been made by China Vanke , Guangzhou R&F Longfor Properties and Times Property which have all declared in the past month plans to sell domestic shares.

Resurgent interest in official debt could also help with the massive pile of local government debt which Chinese provinces need to refinance this year, and which has kept yields on longer-dated Chinese treasuries elevated this year.