Make in India cannot be successful on the toil, miseries and abuses of young children in the manufacturing sector, the Nobel laureate wrote in a letter to PM 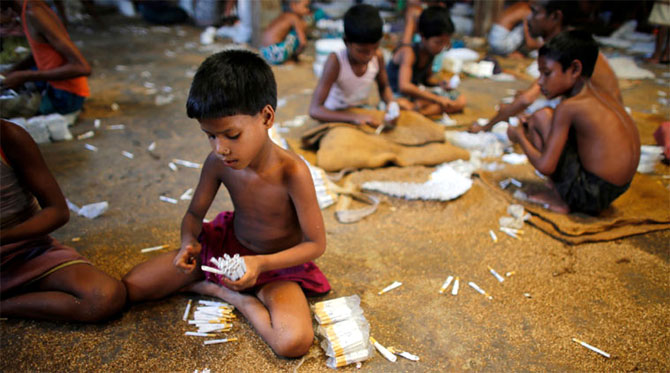 Nobel Laureate Kailash Satyarthi feels that Prime Minister Narendra Modi's 'Make in India' programme will prove to be a "big disaster" if child labour laws are not strengthened.

In a letter to the Prime Minister, Satyarthi has said, "If investors are coming from foreign countries to manufacture in India and if your laws are so weak in child labour in comparison to international standards then it will become a big disaster".

He says that the 'Make in India' programme is a great move, but it also exposes a serious weakness of the country.

"Make in India cannot be successful on the toil, miseries and abuses of young children in the manufacturing sector," the 62-year-old founder of 'Bachpan Bachao Andolan' told PTI.

Giving the example of Apple, he said the US-based company faced a lot of criticism after allegations that child labour in China was being used to manufacture their products.

"In India, child labour is working because your law allows it. These big brands will be dependent on local producers who are free to employ children. But the international media and human rights organisations are not going to spare us," said the child rights activist who won the Nobel Peace Prize in 2014 along with Pakistani activist Malala Yousafzai.

He was in Kolkata to support the Rotary India Literacy Mission.

On one hand, Satyarthi said, the government was talking about a 'clean India', 'Skill India' and 'Digital India' missions, but on the other hand children were being employed in tea shops, slaughter houses, restaurants and hazardous industries.

His current concern is the Child Labour Prohibition and Regulation Amendment Bill where the list of prohibited occupations for children has been reduced to only three from the earlier 83.

The proposed amendment also allows children of any age to work in family enterprises or house-based industries.

"I am calling upon all MPs that please don't fail children again and again. The entire political class has to own up the responsibility of our children. If you allow child labour, you also allow unemployment," the Nobel laureate said.

Describing child labour as a form of modern day slavery, he said kids were preferred because it is cheap to hire them.

"If the amendment was passed it would become legal to employ children in hazardous industries like e-waste, zari/embroidery works, butcheries, tanneries, glass industry, etc.

"Even in family-based industries most of them are hazardous and most of the trafficked and enslaved children work under the garb of an 'extended family'. That is a big grey area," Satyarthi said while describing the Bill as "regressive".

The Bill would also go against the Constitution which makes education a constitutional right, he pointed out.

According to a report by the International Labour Organisation (ILO), there are 5.7 million child workers in India between the ages of 5 and 17.