Cairn India said it will spend up to Rs 5,725 crore (Rs 57.25 billion) to buy back shares, a move which would help promoter Anil Agarwal-led Vedanta Group gain greater control over oil producer without putting any money. 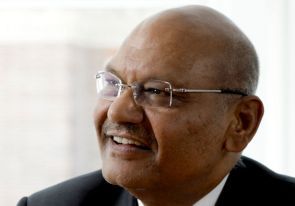 Cairn, which is sitting on a cash pile of about $3 billion, in a statement said its board has approved buying 17.09 crore (170 million) shares or 8.9 per cent of the total shareholding, from open market at no more than Rs 335 apiece.

"The maximum Buyback price represents over 4 per cent premium compared to the average of the weekly high and low of the closing share price of the company during the last two weeks," it said.

The buyback will start in January after shareholders nod and other sanctions and approvals are in place.

Cairn, the largest private oil producer in the country, will offer to buy back shares, including 10.27 per cent held by its former promoter Cairn Energy Plc of UK, and extinguish them.

After completion, Vedanta Group ownership in Cairn India will rise to 64.53 per cent from current 58.76 per cent.

Share buy back is the process where a company repurchases outstanding shares in order to reduce the number of shares on the market.

Companies, as a rule, buy back shares either to increase the value of shares still available (reducing supply), or to eliminate any threats by shareholders who may be looking for a controlling stake.

UK's Cairn Energy plc, which had sold majority stake in Cairn India to Vedanta Group, still holds 10.27 per cent shares and may look at the share buy back programme to exit.

Vedanta Group had bought stake in Cairn India at Rs 355 per share, a price the company stock has not touched in last one year.

"Cairn Energy is a known seller for long time and the share buy back may present it with an opportunity to exit from Cairn India," an analyst said.

While share buy back is considered an efficient means of returning capital to shareholders, it also indicates that the company is not looking at doing major acquisitions or has significant

capex plans that may need its current cash pile.

"The Board of Directors of the company in its meeting held on November 26, 2013 has approved a proposal for the buyback of equity shares of the company from its existing shareholders, other than the company's promoters, promoter group, persons in control and persons acting in concert," the statement said.

Cairn India shares closed at Rs 324 apiece on Tuesday, down 2.09 per cent on the BSE.

"The indicative maximum number of equity shares of Rs 10 each that can be bought back would be 170,895,522, resulting in the reduction of equity capital by approximately 8.9 per cent," the statement said.

The buyback, Cairn said, comes on the backdrop of strong cash flows generated by the company. The company is currently producing over 213,000 barrels of oil and oil equivalent gas per day and is on track to meet year-end target of over 225,000 barrels from all producing assets.

"This proposal is a shareholder reward mechanism through decrease in the equity share capital and a consequent increase in the earnings per share of the company.

"The company believes that the buyback will improve shareholder returns while maintaining the current dividend payout ratio as per the approved policy," the statement said.

Cairn said it will be seeking approval of the shareholders by way of a special resolution to be passed through postal ballot.

ICICI Prudential hold 1.08 per cent shares while foreign institutional investors (FIIs) have 15.14 per cent holding. Financial institutions and Bank have 8.7 per cent.

Image: Vedanta Executive Chairman Anil Agarwal
© Copyright 2021 PTI. All rights reserved. Republication or redistribution of PTI content, including by framing or similar means, is expressly prohibited without the prior written consent.