Encouraged by the widening gap in import duties on raw and refined gold, about 10 medium-sized gold dealers have lined up proposals to set up refineries in India’s hinterlands. Together, these proposals involve an investment of Rs 900 crore (Rs 9 billion). 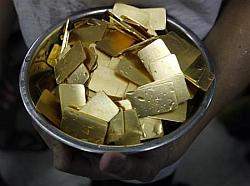 Earlier, the import duty on both refined and pure gold was 4 per cent. Refiners were, however, allowed to claim an excise drawback of up to one per cent, in case they set up refineries in the hinterland or industrially under-developed states. So, effectively, raw gold involved tax outgo of three per cent.

In January, the government raised the import duty on refined gold to 6 per cent and that on raw gold to five per cent.

“Domestic refineries continued to enjoy one per cent drawback, resulting in an overall tax outgo of just four per cent on raw gold imports, two per cent lower than on refined gold. This has attracted a lot of investment interest from existing and new players to set up refineries,” said James Jose, vice-president of the Association of Gold Refineries and Mint (AGRM) and managing director of Chemmanur Gold Refinery.

“About 10 proposals are awaiting the government’s approval. These have about 30 tonnes of annual accumulative capacity. Considering an average investment of Rs 30 crore (Rs 300 million) for setting up a one-tonne refinery, this year, the gold refining business is set to see investments worth Rs 900 crore,” he added.

Through several years, many gold jewellers have set up their own refineries. However, owing to viability issues, they refrained from importing raw gold.

These refineries continued to operate at 35-40 per cent of installed capacity, primarily through melting domestic scrap (used) jewellery.

As of March 2012, India’s refining capacity was estimated at 500 tonnes, against the country’s annual gold consumption of 950

Domestic and foreign investors have pumped in huge investments in the gold refining business. After Budget 2012-13, when the then finance minister Pranab Mukherjee had announced different import duties for raw and refined gold, many investment proposals were recorded.

“We are planning to set up a mid-size refinery, the proposal for which would be ready in a month,” said managing director Harmesh Arora. He added some of the proposed refineries would commence production in six months.

MMTC, along with Switzerland’s PAMP gold and silver refinery, has set up a gold refinery in Haryana, which started operations recently.

Indian refineries have proposed to import raw gold, with about 95 per cent of gold content, from Peru, Australia, Russia and a number of African countries.

Jose said the government should provide quick clearances for imported raw gold containers, considering the refinery business was a high value-low margin one.

He added the refining margin was less than one per cent; if the containers were held for two to three days, the entire margin was wiped out.