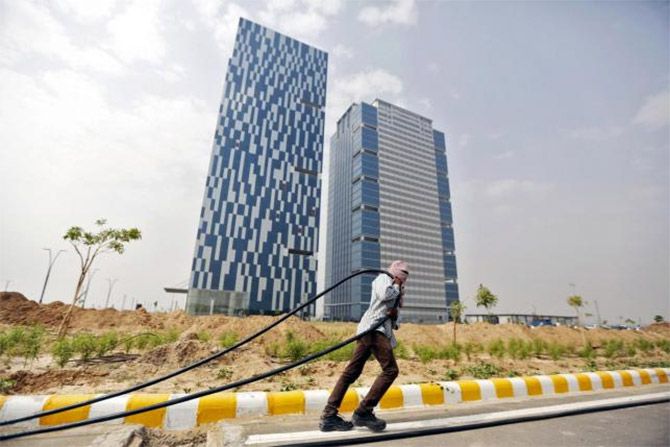 Image: Conceived in 2007 by Prime Minister Narendra Modi, then Gujarat's chief minister, the city has had a slow start. Photograph: Reuters

Finance Minister Arun Jaitley and his team are believed to be considering steps to attract big names in investment banks and global brokerage and trading firms to the Gujarat International Finance Tec-City, known as GIFT City.

On the banks of Sabarmati in Gandhinagar, Gujarat, the city has been positioned as a "global financial centre".

Conceived in 2007 by Prime Minister Narendra Modi, then Gujarat's chief minister, the city has had a slow start.

The coming Budget could offer substantial tax breaks and possibly a 10-year tax holiday, sources familiar with the developments said, adding exemptions from securities transaction tax (STT) and commodity transaction tax were among the incentives being considered for the GIFT City.

However, a decision has not been taken, an official said.

The finance minister is also likely to announce a number of capital market-related reform measures, including removal of STT and stamp duties on trading futures and options, clarification on tax treatment in the exchange-traded currency derivative markets and regulatory positions on participatory notes.

Removing regulatory constraints on banks and mutual funds to participate in commodity futures, among others, were also being discussed, a senior government official said.

Classified as a special economic zone (SEZ), GIFT city is being set up on the lines of global financial and information technology services hubs like Shinjuku (Tokyo), Lujiazui (Shanghai), La Defense (Paris) and the London Dockyards.

It is aimed at attracting firms to open offshore banking as well as insurance and capital market intermediaries. According to existing provisions in the Act, SEZs are already allowed duty-free imports and are exempt from indirect taxes, besides 100 per cent income-tax exemption on export income for units for the first five years, 50 per cent for the next five years and 50 per cent of the ploughed back export profit for another five years.

The developers and co-developers are given an income-tax holiday for 10 years under section 80IAB.

"The government will definitely have to provide tax incentives to attract units in GIFT. Dubai International Financial Centre, for instance, provides zero tax rates. I am not sure if that will be possible, but that is the global benchmark for international financial centres," said Rakesh Nangia, managing partner, Nangia and Co.

The DIFC offers zero per cent tax rate on income and profits (guaranteed for a period of 50 years), free capital convertibility and wide network of double taxation treaties for UAE incorporated entities.

The GIFT City comes at a time when the government has announced phasing out of corporate tax exemptions. It has said that after March 31, 2017, sunset clauses with regards to tax exemptions will not be renewed. After that, no weighed deduction will be applicable for operation, maintenance and development of export units in SEZs.

"It is yet to be decided whether they can exclusively incentivise GIFT," said the official quoted above.

Apart from GIFT City, the budget-planners are said to be looking at measures to make India's equity, commodity and currency futures more competitive and liberalising them further.

Some other measures could include lifting specific bans on any market segment, participant or product, making trading and clearing rules nationality-neutral and participant-neutral, allowing access to all foreign participants, as long as they meet financial action task force requirements, and over a longer-term period, getting in uniform know-your-customer norms, internationalising the rupee, and moving to a residence-based taxation regime.

The genesis of these suggestions is a report by the standing council on international competitiveness of the Indian financial sector.

The council was set up in 2013 and its report was made public only in September.

The finance ministry had requested various financial regulators, including the Reserve Bank of India (RBI) and Securities and Exchange Board of India, to examine the report.

Regarding STT and stamp duty, the report had said that since the two levies add to transaction costs in equity derivatives, "STT should be removed. Stamp duty should not be applicable to cash-settled products such as index derivatives, as there is no delivery of the underling (product) taking place."

STT, announced by then finance minister P Chidambaram in the first Budget of the earlier government, is now levied on all sale transactions on futures and options.

It is 0.01 per cent of the traded price of futures and 0.017 per cent on options premiums.

A 0.125 per cent STT is payable on the settlement price by the buyer of an option that is exercised. If STT is paid, there is no long-term capital gains tax. But, if it is not paid, the latter is levied at 10 per cent.

The panel's report had divided its recommendations into three categories - short, medium and long-term - based on the nature of the reforms and the time that may be required to implement them.

Internationalisation refers to a state where exporters from other countries agree to take payment in rupees and where the currency risks in international borrowings are borne by lenders rather than borrowers in India.