From poetry to divinity, Finance Minister Nirmala Sitharaman made sure that her maiden Budget speech on Friday was interspersed with couplets and quotes. 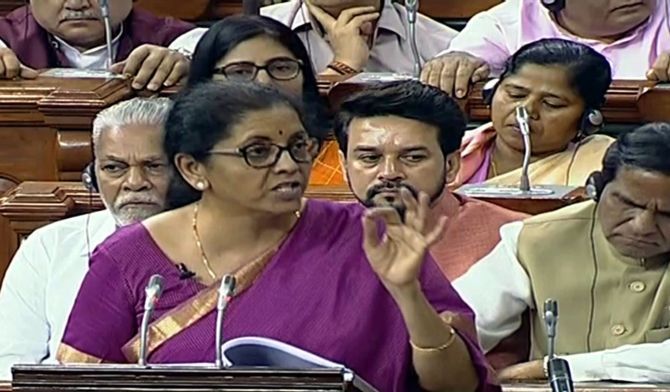 Her words were received with appreciation by lawmakers.

She made the reference while speaking of India's target of becoming a $5 trillion economy in the next few years. She added that people wonder and doubt if the goal can be achieved.

Giving stress on the significance of women empowerment, the Minister quoted Swami Vivekananda, "There is no chance of the welfare of the world unless the condition of women is improved. It is not possible for a bird to fly on one wing."

She invoked 12th-century social reformer and thinker Lord Basaveshwara's principles and said, "Our government recognizes and follows the teachings of Lord Basaveshwara who preached 'Kayakave Kailasa'." (work is worship).

Lord Basaveshwara was the one who first established the concept of 'Kalyana Rajya' (welfare state).

What the minister said in Tamil translates to, 'An elephant will be happy to have two mounds of rice from a paddy field. But if it enters the land, it will have far less to eat than it will trample.'

"This is the principle we will follow in taxation. We will be happy to collect only that much taxes that is necessary from the taxpayer. We will not trample on the taxpayer," she said.

This is the 89th Union Budget.