Centre shows optimism of achieving the target of 4.1% at back of recent measures and turn around in manufacturing.

Finance Minister Arun Jaitley on Tuesday said he was hopeful of meeting the fiscal deficit target of 4.1 per cent of gross domestic product (GDP). To achieve this, the government might need to reduce its spending by Rs 57,000 crore (Rs 570 billion) in 2014-15.

“Revenue collections, which were affected due to low manufacturing in the last two-three years, are turning around and we hope to meet our fiscal targets," Jaitley said while addressing a Central Board of Excise Customs function.

He added India was much better placed in terms of its current account deficit (CAD) and reserves looked robust. The CAD for 2014 was 1.6 per cent of GDP and many global brokerage houses have pegged it at 0.3-1 per cent in 2015.

Centre recently took measures to boost revenue. Recently, it increased the excise duty on petrol and diesel, amid a dip in global oil prices. The four excise duty hikes since November will result in Rs 21,000 crore (Rs 210 billion) in additional revenue this financial year.

Divestment in key public sector undertakings has occurred only for the Steel Authority of India. But the government recently announced stake sales in four companies, including Bharat Heavy Electricals Limited that were earlier not on the divestment roster. At current market prices, the government’s kitty could swell by Rs 18,000 crore (Rs 180 billion). Additionally, the government is planning to divest Rs 5,000 crore (Rs 50 billion) through an exchange-traded fund for PSUs.

The government is also banking on Rs 45,000 crore (Rs 450 billion) through telecom spectrum sales this financial year. The expected Rs 1.47 lakh crore from auction of 92 coal mines by March will go to the states, according to Coal Minister Piyush Goyal.

If tax revenue falls short by roughly Rs 1 lakh crore, as estimated in a mid-year analysis by the finance ministry, the Centre will have Rs 70,000 less, since almost 30 per cent of its revenue goes to states.

Despite the additional revenue, the Centre could still be staring at a gap of Rs 57,000 crore, which it might need to offset by expenditure cuts. 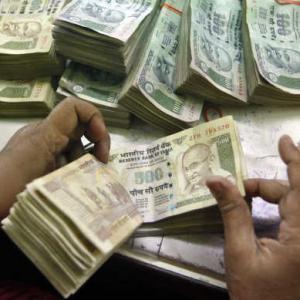