Railway Minister Suresh Prabhu will also have to take call on whether to impose safety cess for strengthening safety measures to prevent accidents. 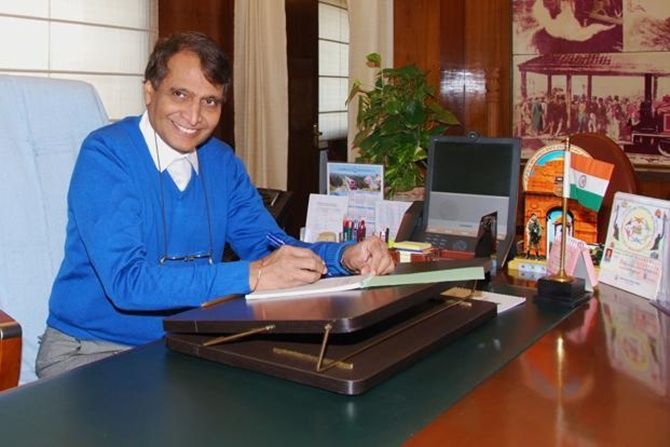 Railway Minister Suresh Prabhu faces a stiff dilemma on whether to raise fares and freight rates in his second Rail Budget on Thursday as railway finances come under tremendous strain.

While the falling revenue collection and increasing demand for funding various capacity augmentation projects as well as the requirement for improving passenger services demand hiking up fares, a section in Railway Ministry does not favour any such move, saying an increase at this juncture will not be a very good idea as elections are round the corner in four states and diesel price is on the downslide.

"Diesel price is on the decline. Passenger bookings and goods loadings are also on downslide. So at this moment hiking freight rate and passenger fares will affect the Railways adversely," sources in railways said, adding "fare hike can be effected anytime after budget also, if required and it is not necessary that it has to be done only in the budget."

Besides, Prabhu will also have to take call on whether to impose safety cess for strengthening safety measures to prevent accidents.

However, railways have already decided to run as many special trains on higher fares in popular routes catering to the growing demand during festive season, an indirect way of hiking fares.

Upgradation of existing coaches with modern facilities and improved interiors are being planned in a big way to run trains on higher fares like the recently launched Mahamana Express between New Delhi and Varanasi.

The cross-subsidy from freight to passenger operation has crossed Rs 30,000 crore (Rs 300 billion) this year while the Seventh Pay Commission burden is about Rs 32,000 crore (Rs 320 billion).

Railways had effected a 14 per cent across-the-board hike in passenger fares in 2014 during the NDA regime and a 10 per cent increase last year.

However, despite the grim economic condition, the Railway Budget is expected to focus on massive capacity creation in the rail sector with an increased plan outlay of about Rs 1.25 lakh crore.

A significant amount will be earmarked for safety upgradation, electrification, doubling and modernisation of yards to clear traffic bottlenecks, the sources said.

It appears that Prabhu will have to depend mostly on the External Budgetary Resources (EBR) for execution of the capacity augmentation projects and he will give details of his resource mobilisation plan in the Rail Budget 2016-17.

While annoucement of new trains is unlikely for the  second consecutive year, new service will be launched selectively to cater to the local requirement and demands.

Aiming at shifting goods from road to rail, the budget will offer various schemes to attract loadings. A scheme for premium high-speed parcel trains is slated to be unveiled in the budget.

In suburban section, the Rail Budget will announce introduction of AC suburban trains in Mumbai, which will be replicated in other areas as well. The fare of AC suburban service will be higher than regular local train.

Introduction of dual mode engine to enable the train to run both on diesel and electricity is likely to be announced in the budget.

Prabhu will give details about the concerted efforts being undertaken by the Railways to keep stations and trains clean and environment-friendly in his second budget speech in Parliament on February 25.

Continuing with 'Swachh Bharat' drive, Prabhu is also likely to announce plans for installation of bio-toilets and vacuum toilets in as many trains and placing dustbins in every coach.

According to sources, since Swachh cess is imposed on railways, there is a likelyhood of getting a portion of Swachh fund for carry out cleaning exercise at rail premises.