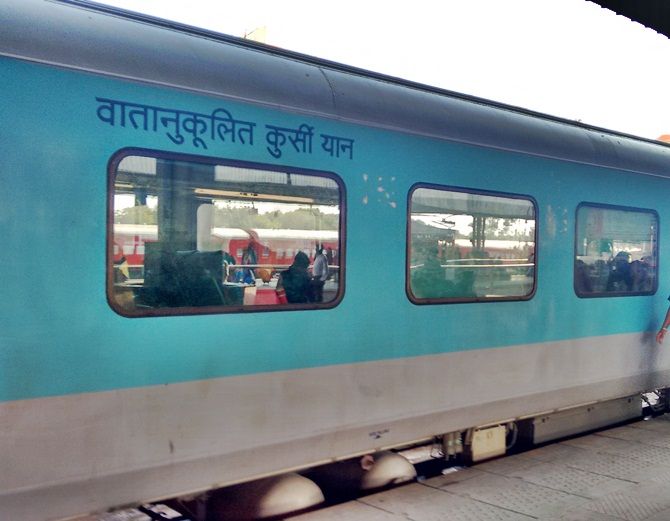 Gradual replacement of bogies of Shatabdi express with those to be used in semi-high speed trains, a new colour scheme, state-of-the-art furnishing of coaches and Radio-Frequency Identification (RFID) tagging of linens are some of the proposals likely to feature in the Rail Budget 2016-17.

Besides, the scheme of manufacturing 'Anubhuti' class coaches for premier services announced in the Rail Budget 2013-14 but in limbo, is likely to be revived, according to railway sources.

Retrofitting of Linke Hofmann Busch (LHB) coaches to reduce jerks and to upgrade those so they can run at a speed of 200 kmph are some other proposals slated to feature in the Rail Budget.

This would enable railway to develop indigenous capability to manufacture coaches for semi-high speed trains at its production units.

This will also reduce import dependence and develop potential for export of low cost coaches for semi-high speed trains in future, they said.

Provision of two-way swing doors for AC compartments for easy evacuation of passengers in emergency situations and proliferation of fire and smoke detection system in coaches are other measures expected to be part of the budget proposals.

Continuing with 'Swachh Bharat' drive, Railway Minister Suresh Prabhu is also likely to announce plans for upgradation of toilets at rail premises and placing dustbins in every coach, they said.

In order to reduce pilferage, effective monitoring of bedroll items through RFID tagging is being planned.

New colour scheme for coaches is also likely to be announced.