Boeing Co stood by the troubled lithium-ion battery technology that this month grounded its new, high-tech 787 Dreamliner and said on Wednesday that the grounding had no significant impact on its 2013 financial forecast. 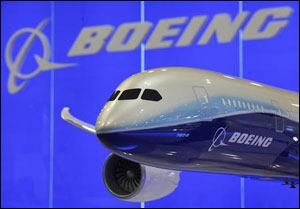 It's "business as usual," CEO Jim McNerney said as the Chicago company posted market-beating profits for the fourth quarter.

Responding to revelations that the 787 battery has had more problems than previously disclosed, Boeing said it will speed up production of the jet as planned and that it had not advised suppliers to slow down shipments of pieces for the 787, the most widely outsourced jet in the company's 97-year history.

"Nothing that we have learned has told us that we have made the wrong choice on the battery technology," McNerney said on a conference call with analysts and journalists following release of fourth quarter results.

"We feel good about the battery technology and its fit for the airplane. We have just got to get to the root cause of these incidents and we will take a look at the data as it evolves, but there is nothing that we have learned that causes us to question it at this stage."

Boeing has replaced more than 100 787 batteries for customers and its own use, according to a person familiar with the matter, who noted that 787 production started six years ago.

McNerney said replacement was "a matter of routine maintenance rather than any safety concerns" and not something airlines would ordinarily report to regulators.

The Federal Aviation Administration said it did not get any advance notice of the battery problems, which occurred over months. The National Transportation Safety Board said it received information about the replaced batteries early in its investigation.

In contrast, the probe into the cause of two burnt batteries this month involves hundreds of experts from Boeing and outside the company. But that effort is "highly compartmentalized" and "it's not drawing any critical resources from any other growth programs we've got," McNerney said.

"Our plan is to continue production of the 787 and to continue the development of the wide-body airplanes."

The statements came as Boeing posted a fourth-quarter results that beat market expectations, thanks in large part to its ability to speed up jet production and keep costs down.

Aviation safety agencies in the United States and Japan are investigating what caused lithium-ion batteries to burn on two 787 passenger jets earlier this month, prompting the worldwide grounding.

Boeing has since halted 787 deliveries and analysts have raised concerns about the cost of the grounding and fixing the battery problem on about 125 jets that Boeing has built so far.

But Boeing released a forecast for 2013 that included no significant impact from the 787.

The company expects to deliver at least 60 Dreamliners in 2013, fewer than the 80 jets or more that some analysts expected, but a figure that implies a four-month delay in delivery, since Boeing is making five 787s a month.

McNerney said Boeing still plans to increase 787 production to seven a month by mid-year and 10 a month by year-end.

The new production forecast raised some eyebrows. Russell Solomon at Moody's Investors Service was forecasting 100 787 deliveries and said Boeing's forecast of more than 60

was "significantly weaker than we had expected."

Earlier on Wednesday, Japan's two biggest airlines said they repeatedly replaced sub-par lithium-ion batteries on their Dreamliners in the months before the two incidents that led to the 787 groundings.

All Nippon Airways Co Ltd, the biggest 787 customer, said it replaced 10 batteries. Japan Airlines Co Ltd also indicated problems with the battery system reliability long before one caught fire on a JAL 787 at Boston's Logan Airport on Jan. 7. A second was badly charred and melted on an ANA domestic flight a few days later, prompting the pilot to make an emergency landing and evacuation.

The two airlines operate 24 of the 50 787s in service. United Airlines is the only U.S. carrier currently flying the 787.

McNerney said the replacement rate had been "slightly higher" than expected, but added "there's been no incidents that we're aware of where a battery has been replaced for any sort of safety concerns."

Cash flow, a closely watched metric that reflects Boeing's rising production, rose 42 percent to $4.2 billion in the fourth quarter and is forecast to exceed $6.5 billion in 2013.

The consensus Wall Street estimate was $5.13 a share for 2013, according to Thomson Reuters I/B/E/S.

Total revenue for the quarter rose 14 percent to $22.3 billion.

For the first time, Boeing released so-called core results, which exclude most pension expenses that are part of standard accounting measures. Boeing said core earnings rose 9 percent to $1.84 billion in the quarter from $1.69 billion a year ago.

Core earnings per share fell 24 percent to $1.46 from $1.92, but the year-earlier figure included a one-time tax benefit of about 52 cents a share.