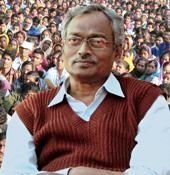 The West Bengal government has earmarked 30,000 acres for industrial projects (around 7,000 acres has been allocated, the rest is at different stages of acquisition), but even as it faces one of the most violent battles for land rights, figures for displacement or project-affected persons are yet to be aggregated.

Commerce and industry minister Nirupam Sen and land and land reforms minister Abdur Rezzak Mollah say the figures are yet to be collated. West Bengal Industrial Development Corporation sources said land losers would only be known once the projects are awarded.

Sen said, "We are only acquiring land for important and big projects. Most of the companies had opted for direct purchase." Mollah said, "The figures would have to be collected from different collectors in the districts."

Strangely, even the non-government organisations and activists that lent their voices to the land rights battle do not have figures.

Of the projects in the pipeline, iron and steel has the lion's share. Apart from expansion of existing projects, there are 10 proposed steel plants in the private sector involving an investment of Rs 109,550 crore (Rs 1,095.5 billion). The capacity to be created is 28 million tonnes and the land requirement pegged at 23,590 acres.

A number of special economic zones are also in the pipeline. Since 2006, there are 14 in-principle SEZs and another 14 have been formally approved. However, multi-product SEZs are only three, totaling 8,000 acres.

What has made land acquisition in West Bengal most difficult is the Left Front's government most famous programme, of land reforms, bringing down the average land holding to less than an acre. Not surprisingly, therefore, land losers in Singur were around 13,000 for 997 acres.

Naxalites, supported by political parties, have encashed on the resentment. A recent Maoist Information Bulletin mentions, "The present war waged by the Indian rulers in Lalgarh, Dandakaranya, Jharkhand, Bihar, Orissa and elsewhere is a war for the plunder of the vast mineral wealth lying in the Adivasi regions.

"Renowned writer on advasis and a Jnanpith award winner, Mahasweta Devi, has correctly pointed out that the military offensive in Lalgarh is taken up in order to hand over the lands and resources to the Jindal group. For these social fascists, Jindal is dearer than the people."

The single largest investment in the state is from JSW Steel at Rs 35,000 crore (Rs 350 billion) for setting up a 10-million tonne plant at Salboni in West Medinipur, about 20 km from Lalgarh, the centre of Naxalite insurgency.

Though 90 per cent of the 4,700-acre JSW land was vested with the government and the balance was acquired directly by the company, Naxalites claimed the government land was supposed to be distributed to tribals.

However, Lalgarh is not just about land acquisition. Sudeep Chakravarti, a risk analyst, columnist and author of Red Sun: Travels in the Naxalite Country, said: "The violence in West Bengal is on account of a large number of memoranda of understanding.

Projects such as Tata's Nano plant and the proposed chemical hub by Indonesia's Salim group provided the spark to carry forward agitation. Maoists were happy to support these agitations, but in places like Lalgarh, the reason for the agitation goes beyond MoUs to systematic alientation of the tribal population effected by the CPM state government. Maoists are adept at leveraging any toehold."

The Lalgarh movement led by the Naxalites has its roots in Singur and Nandigram, the site for Tata Motors' Nano project and the petroleum, chemicals & petrochemicals investment region, respectively.

At least four projects -- JSW Steel, Jai Balaji Industries, Shyam Steel, Adhunik Steel -- are in Naxalite-affected states. While JSW Steel was located in West Medinipur, where 30 police stations have been identified as Naxal-affected, the other plants are at Purulia, where nine police stations are under threat.

Nirupam Sen attributed the heightened Naxalite activities at Lalgarh to under-development, but it all started about a year earlier when chief minister Buddhadeb Bhattacharjee's convoy was targeted by naxals on his way back from the foundation stone-laying ceremony for the JSW Steel project.

The Maoist bulletin mentions, their fight is against 'oppression'.

For the Naxalites, the 2,000-odd unwilling farmers that accounted for 15 per cent of the total land losers showed it was a fight against oppression and for land rights. Jobs and employment were incidental.