The finance minister asked lenders to identify eligible borrowers and reach out to them and urged for quick implementation of a sustained resolution plan for the revival of every viable business. 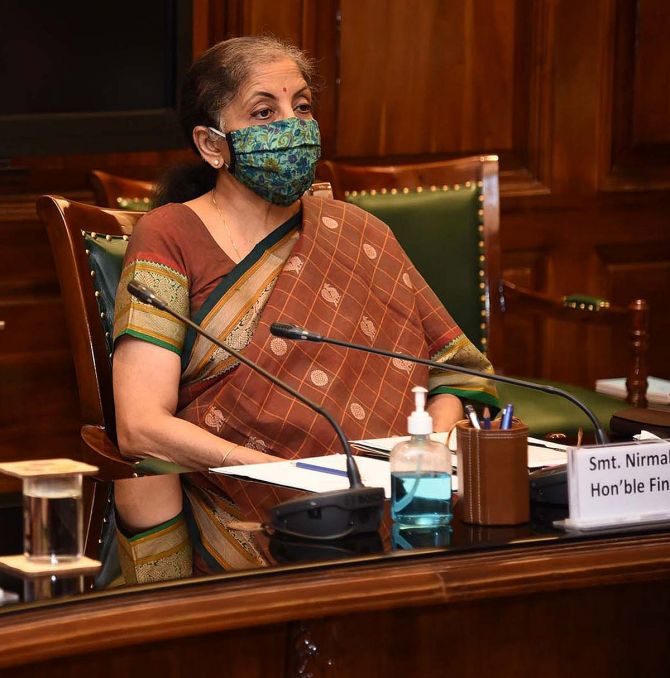 Finance Minister Nirmala Sitharaman on Thursday asked banks and NBFCs to roll out loan restructuring scheme for COVID-19 related stress by September 15, and provide adequate support to the borrowers following the lifting of moratorium on repayment of debts.

The minister urged lenders to immediately put in place a board-approved policy for resolution at the review meeting with heads of scheduled commercial banks and NBFCs through video conferencing.

During the meeting, the minister impressed upon the lenders that as and when the moratorium on loan repayments is lifted, borrowers must be given support and COVID-19 related distress must not impact the lenders' assessment of their creditworthiness, an official statement said.

The six months moratorium on payment of EMIs ended on August 31.

In the three-hour meeting, the statement said, the finance minister asked lenders to identify eligible borrowers and reach out to them and urged for quick implementation of a sustained resolution plan for the revival of every viable business.

Banks are in the process of getting a board-approved restructuring framework in line with the RBI's framework and eligibility defined by the central bank in its notification on August 6.

The finance minister also emphasised that resolution schemes must be rolled out by lenders by September 15, 2020, and a sustained media campaign to create awareness be carried out thereafter, the statement said.

She advised lenders to ensure that regularly updated FAQs (frequently asked questions) on the resolution framework are uploaded on their websites in Hindi, English and regional languages, and also circulated to their offices and branches, it added.

On their part, bankers assured the finance minister that they are ready with their resolution policies and have started the process of identifying and reaching out to eligible borrowers and that they will comply with the timelines stipulated by the Reserve Bank of India (RBI).

The ministry of finance has also been engaging with the RBI to ensure that the lenders are assisted by the central bank in the resolution process.

The RBI last month permitted one-time restructuring of both corporate and retail loans without getting classified as a non-performing asset (NPA).

Restructuring benefit can be availed by those whose account was standard on March 1 and defaults should not be over 30 days.

The resolution plans to be implemented under the framework may include conversion of any interest accrued, or to be accrued, into another credit facility, or granting of moratorium and/or rescheduling of repayments, based on an assessment of income streams of the borrower up to two years.

While the resolution under this framework can be invoked till December 31, 2020, the lending institutions have been encouraged to strive for early invocation in eligible cases, particularly for personal loans.

Last month, state-owned Punjab National Bank had said it expects to restructure loans worth about Rs 40,000 crore as per the RBI-approved guidelines.

However, banks have to find capital to fund restructuring as 10 per cent provisioning has to be made against such an account, Gadia said.

There would be clarity on financial covenants in the next few days when the K V Kamath committee submits its report to the RBI, he added.

Speaking on the issue, Srei Infrastructure Finance chairman Hemant Kanoria said that most of the clients whose cash flow has been affected due to COVID-19 are interested in availing the scheme.

They are waiting for the Kamath Committee report and roll out of the scheme, Kanoria said.

"Just like NBFCs are being asked to refinance the loans given to their clients, NBFCs should also be allowed to get their borrowings refinanced by banks; otherwise it will lead to a cash flow mismatch," he added.

Alternatively, Kanoria said, NBFCs (non-banking financial companies) should be allowed to have access to public deposits with certain control mechanisms.

The government should also consider the creation of an institution, which would act as a refinancing agency to support NBFCs, much like the National Housing Bank (NHB) that supports the housing finance companies, he noted.