‘It seems to be a bit of an aberration. It should be set right; there is a proper mechanism in place. In the normal course, the state police do not have any jurisdiction on central government employees,’ the official said.

A senior finance ministry official on Monday described the arrests of top officials of state-run Bank of Maharashtra last week as an "aberration" and said it should not be construed that "bankers are being hounded".

The arrests had riled the entire banking sector so much that national bankers' lobby IBA held an emergency meeting last Friday in Mumbai and called for setting up an external panel to give clearance to arrest senior bankers. It also had decided to make a representation to the government.

Stating that the BoM incident should not be taken as bankers are being hounded, the official said the state police action is not fair as well.

"It seems to be a bit of an aberration. It should be set right; there is a proper mechanism in place. In the normal course, the state police do not have any jurisdiction on central government employees," the official said.

The official, who was addressing the media on the sidelines of the AIIB annual summit, also underlined that "whether bankers are being hounded, I disagree with that."

The financial ministry official further said being a large country, such aberrations do happen but they only help make the system better for the future.

On the IBA proposal to set up an external committee to give permission to arrest senior bankers for alleged wrongdoings, the official said, "One aberration should not become sensational news. Sometimes, over sensationalising something is harmful."

The official also said the IBA did not protest but only highlighted their concerns.

"They did not protest. They have told us in a very dignified way about what is the wrong happening. They have highlighted their concerns, which is not the same thing as a protest," the finance ministry official said.

The arrests came a day ahead of the annual general meeting of the bank, wherein the entire shareholders backed the management.

The move also drew the ire of the bank unions, which wrote to the banking secretary protesting against the arrests.

BoM's managing director Marathe was arrested in spite of the fact that the around Rs 100 crore loan was extended when he was not heading the bank at all and that the Rs 94.52 crore outstanding amount is fully secured.

Source: PTI© Copyright 2021 PTI. All rights reserved. Republication or redistribution of PTI content, including by framing or similar means, is expressly prohibited without the prior written consent.
Related News: IBA, Ravindra Marathe, AIIB, Central Bureau of Investigation, Bank of Maharashtra
SHARE THIS STORY
Print this article 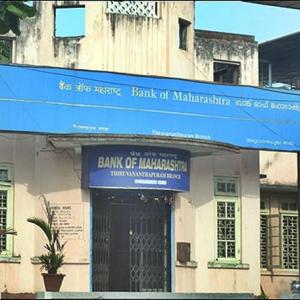