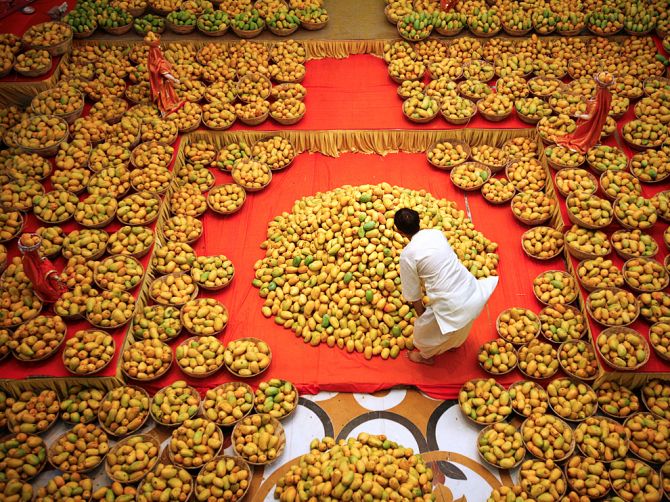 The succulent Banganapalle mango has got a Geographical Indication tag, making Andhra Pradesh the proprietor of the variety know for its sweetness.

The Registrar of Geographical Indications Registry, Chennai, O P Gupta has accorded the registration following an application from the horticulture commissioner, Andhra Pradesh.

The Andhra Pradesh government is now the registered proprietor of the GI tag for these mangoes, often hailed as "the king of fruits”.

A GI tag indicates that the product comes from a specific region.

The fruits can retain their quality under cold storage even up to three months, the Andhra Pradesh government said in its documents seeking the GI tag.

"The prominent characteristic of Banganapalle mangoes is that their skin has very light spots, stone is oblong in shape and has very thin seed with sparse and soft fibre all over," it said.

The primary centre of origin of the fruit is Kurnool district comprising Banaganapalle, Paanyam and Nandyal mandals, according to Andhra Pradesh government which mentioned Rayalaseema and coastal Andhra as secondary centres of origin.

The government has also listed Khammam, Mahabubnagar, Rangareddy, Medak and Adilabad districts in Telangana as secondary centres of origin.

A logo too is in place which features a bright yellow fruit around which the tagline says "Banganappalle Mangoes of Andhra Pradesh," with images of a man and a woman who seem to be farmers.

According to an affidavit furnished in 2011 by the then Andhra Pradesh commissioner of horticulture, I Rani Kumudini, nearly 7.68 lakh families, were involved in the production of Banganapalle mangoes.

About 5,500 tonnes of Banganappalle variety of mangoes were being exported annually to countries like the US and UK.

While the annual turnover of Banaganapalle mangoes was approximately Rs 1,461 crore, exports were to the tune of Rs 20.68 crore, she had said.

A GI tag certifies the origin of a product or produce from a particular region, as the quality or other features of the product is attributable only to the place of its origin.

The tag helps farmers or manufacturers as the case may be to get a better price in the market.