The carmaker is under pressure to identify those responsible, to say how vehicles with illegal software will be fixed and whether it also cheated in Europe. 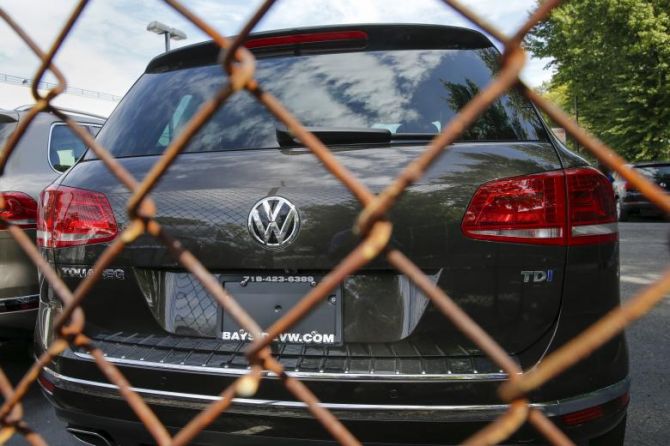 Volkswagen said on Wednesday it would take time to get to the bottom of its rigging of diesel emissions tests, hours before the carmaker is due to give updates on its findings to German regulators and US lawmakers.

More than two weeks after it admitted to cheating US emissions tests, Europe's largest carmaker is under pressure to identify those responsible, to say how vehicles with illegal software will be fixed and whether it also cheated in Europe.

"Nobody is served by speculation or vague, preliminary progress reports," Hans Dieter Poetsch told a news conference after being confirmed as the German company's new chairman.

"Therefore it will take some time until we have factual and reliable results and can provide you with comprehensive information," he added, declining to take any questions.

Later on Wednesday, Volkswagen submitted plans to Germany's KBA watchdog to spell out how it would make its diesel vehicles comply with emissions laws.

The transport ministry said it had been assured by the company that the deadline would be met.

"My expectation is that the KBA will analyse this report rapidly and comprehensively, and submit possible questions to Volkswagen," he told reporters in Berlin.

In written testimony to a US congressional oversight panel, Volkswagen's top US executive said the carmaker has withdrawn its certification application for some 2016 model year vehicles due to a software feature that should have been disclosed to US and California regulators as an auxiliary emissions control device, or AECD.

A spokeswoman for the US Environmental Protection Agency said the withdrawal also includes 2016 Audi A3 turbodiesels and added that regulators are investigating the nature and purpose of a recently identified AECD that Volkswagen said it included in one or more model years.

AECD is a regulatory term that includes defeat devices, like the software logarithm Volkswagen has admitted using in model years 2009-2015.

Michael Horn, who testifies before lawmakers on Thursday, provided no further details but said Volkswagen is working with regulators to continue the certification process.

Both events come as investigations and lawsuits against the company continue to pile up.

According to a letter released on Wednesday, top senators on the US Senate Finance Committee are investigating Volkswagen's actions related to federal tax credits designed to reward consumers for buying environmentally-friendly vehicles.

Stephan Weil, the prime minister of the German region of Lower Saxony which is Volkswagen's second-biggest stakeholder, denied suggestions the company was responding too slowly.

German Chancellor Angela Merkel also told the European Parliament she believed Volkswagen was doing its best to address its problems, and urged a Green party politician not to use them to condemn the entire car industry.

"It puts thousands and thousands of European jobs at risk," she said.

Poetsch addressed reporters after the carmaker's 20-person supervisory board met at its headquarters in Wolfsburg to discuss the progress of its internal investigation into the biggest business crisis in the company's 78-year history.

The scandal has wiped more than a third off its share price, forced out its long-time chief executive, led its new CEO to predict "massive cutbacks", and sent shockwaves through both the global car industry and the German establishment.

One source close to the matter said there was a "certain degree of fright" among management ahead of Horn's appearance before the congressional panel.

However, the source said it was too early to name those responsible for installing software in some diesel engines to manipulate emissions tests.

Poetsch, 64, promised US law firm Jones Day was "leaving no stone unturned" in its investigations.

But US lawmakers may have to settle for little new information from Volkswagen or the Environmental Protection Agency. Horn said in his written testimony that the Jones Day probe is still at a preliminary stage and asked the panel for "your understanding as we complete this work."

Two senior EPA officials also told the committee that they would not be able to review new details without jeopardising the investigation that their agency is pursuing with the US Justice Department.

Volkswagen has said it may have to refit up to 11 million cars and vans worldwide, and new CEO Matthias Mueller said in a newspaper interview on Wednesday recalls would start in January and would be completed by the end of 2016.

But owners are anxious to know whether the refits will affect the fuel-economy and performance of their vehicles.

Volkswagen has said the illegal software was not activated on the bulk of the 11 million vehicles, most of which are in Europe, leaving uncertainty over whether it rigged tests there.

Germany's transport ministry has said it did manipulate European tests too, but has not given details, making it unclear whether the company faces the same level of fines and lawsuits in Europe as in the United States.

Equinet analysts said the cost of refits could range from less than 100 euros ($112) per vehicle to as much as 10,000 euros, depending on whether software can be upgraded or new hardware is needed.

UBS analysts estimated the total bill for the scandal, including potential fines and lawsuits, could be around 35 billion euros, though they added this was more than factored into Volkswagen's share price after its recent plunge.

In his newspaper interview, Mueller rejected the suggestion Volkswagen informed financial markets too late about the test rigging despite having told EPA officials weeks before it went public.

He also said he believed only a few employees were involved in the manipulations.

In private, other German executives have expressed surprise at the appointment as chairman of Poetsch who, in his previous role as chief financial officer, would have had responsibility for deciding when to inform markets about the emissions rigging.

Germany's financial regulator Bafin has launched a preliminary probe into the circumstances around the announcement. Were it to determine that Volkswagen violated strict communication rules, Poetsch could come under scrutiny.

US lawmakers will press for detailed information on the emissions cheating.

"We have a lot of questions. We have very few answers," complained Representative Diana DeGette of Colorado, the top Democrat for subcommittee.

Officials in Germany, where Volkswagen has been held up for years as a model of the country's engineering prowess, are also anxious for news.

"I now expect a very transparent investigation of the circumstances. I am convinced that we will get more and more clarity," Klaus Mohrs, the mayor of Wolfsburg where Volkswagen employs around 70,000 people, told Reuters.

Data on Wednesday showed German industrial output fell at its steepest pace in a year in August, suggesting Europe's largest economy may be losing momentum just as the Volkswagen scandal casts a cloud over manufacturing.

Some analysts and investors are worried company veterans such as Mueller and Poetsch will not introduce the sweeping changes in business practices they think are necessary to restore the company's reputation.

They are also concerned about the complexity of Volkswagen's investigations.

One source close to the matter said the supervisory board of the company's flagship Audi brand would also meet on Wednesday, and has hired accountants to help investigate the scandal too.