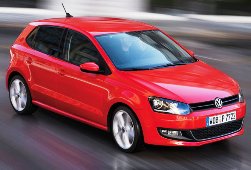 Volkswagen introduced on Tuesday its small car Polo and said it will launch sedan version on the same platform in the second half of this year.

"The Polo stands for German engineering and top technology. It is lively young cosmopolitan made in India car," Volkswagen AG member of the board of management Jochem Heizmann told reporters after unveiling the car at the 10th Auto Expo in New Delhi.

With the entry into the compact car segment in March this year, the company is expecting to increase its market share to 8-10 per cent in the next 4-6 years, he said.

The 1.2 litre Polo coming in three versions would have 50 per cent localisation, he said, adding and the roll out would be through its Chakan facility in Pune.

The Polo would be available in both petrol and diesel variants. Asked about the pricing of the car, Volkswagen Group Sales India Pvt Ltd, member of board and director Neeraj Garg said it would be very competitive and in the range of Honda Jazz, Hyundai I20 and Skoda Fabia.

The exact pricing would be announced once the car reaches dealers in March, he said. Garg said that the company intends to roll out a sedan on the Polo platform in the second half of 2010.

However, before that racing version of the Polo would be rolled out in June. Currently, Volkswagen sells its model through 40 dealers across the country.