It is definitely the heaviest in its class, which is likely to make in-city commutes a tad troublesome 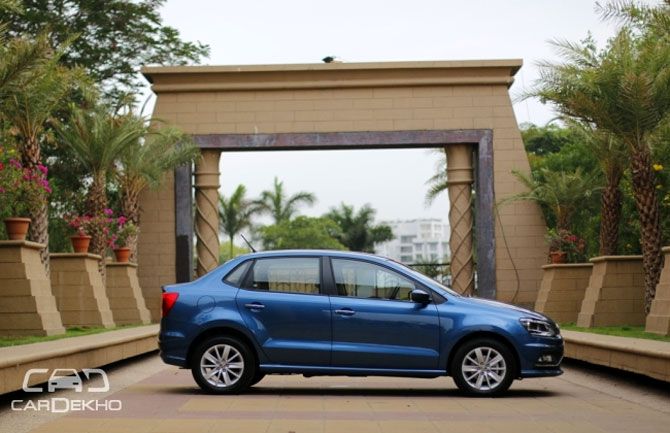 Made in India, for India - sounds like a recipe that can barely go wrong, doesn't it? Nevertheless, the Ameo has been off to a slow and steady start and hasn't set the cash registers ringing wildly. The biggest (and most obvious) chink in the armour has now be plugged, with the updated 1.5-litre TDi diesel engine sitting happily in the engine bay. Volkswagen has gone the whole hog and offered the 7-speed dual-clutch automatic as well. Looks like a fool-proof plan on paper then. Is it? Well, it is. We've spoken in-depth about how the Ameo looks and what's it like on the inside before, so I will skip the details. I'm not a huge fan of the way the Ameo looks, and spending a lot of time with it hasn't changed my opinion either. I still feel the boot is a tad too flat and would look in place on a Skoda rather than a VW. 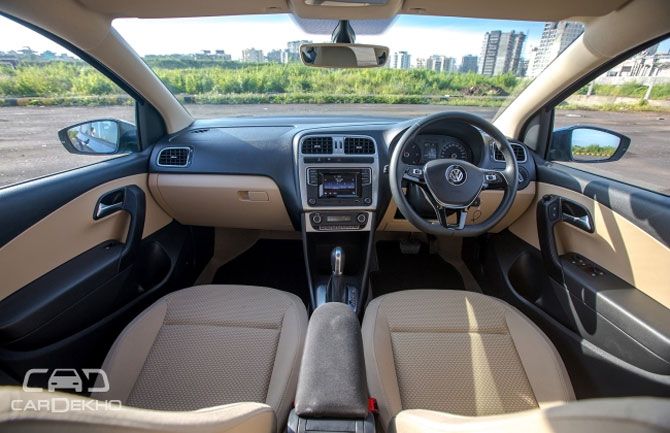 There are also thoughtful features that make life easier behind the wheel, that include auto up-down on all four power windows and tilt and telescopic adjust for the steering.

For the brochure geeks among us, the feature list includes a touchscreen infotainment system with MirrorLink, automatic climate control with rear AC vents, auto-dimming internal mirror and rain-sensing wipers. 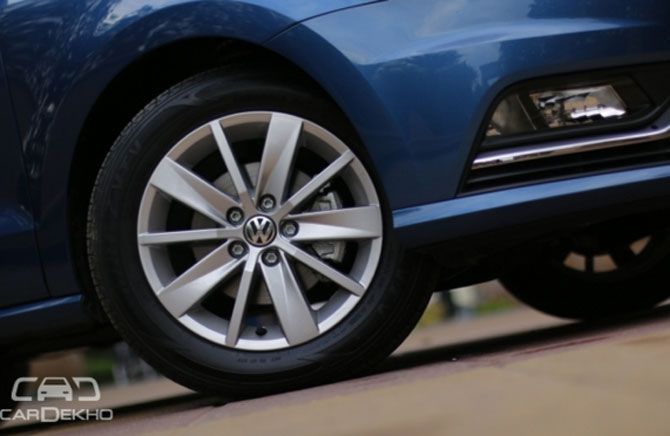 It isn't too spacious, though. My knees are buried into the backrest of the front seat if I sit behind my own driving position, which is why I always gun for the driver's seat.

So, other than the TDI badge on the boot, there's no telling a petrol-powered Ameo apart from a diesel one. Here's a quick trivia - the colour of the 'I' in the badge tells you what VW themselves think of the engine. For instance, if it's blue, it's supposed to be the more efficient variety and if it is red, it means business. This one is red. Get the hint! The four-cylinder engine (EA189) was among the few under the dieselgate scanner. Volkswagen has updated the powerplant since, and it is slightly more careful about the ice caps in the Atlantic and, thankfully, more powerful as well.

Rated at 110PS and 250Nm, the Volkswagen is the most powerful diesel compact sedan around. What's more, the claimed efficiency is a healthy 21.66kmpl for the manual and 21.78kmpl for the automatic. Best of both worlds, then? Turn the key (there's no start-stop button business here like the Dzire/Xcent) and it comes to life sounding particularly gruff and clattery, before settling into a thrummy idle.

Noise levels are on par with the Polo and the Vento, which means those outside the car will know that the engine is running. But, occupants sitting inside with the climate control and the music system switched on will barely hear the trademark TDI clatter. Let's talk about the automatic first. The 7-speed DSG is known for lightning quick shifts and this is no different. Compared to its other automatic rivals, such as the Dzire and the Zest (that feature AMTs), the Ameo's gearbox feels centuries ahead in terms of refinement and response. Keep the weight of the right foot in check, and it will upshift at a smidge over 2000rpm, and chug along in seventh gear at speeds as low as 75kmph. You now see why the claimed ARAI figure is possible, don't you? 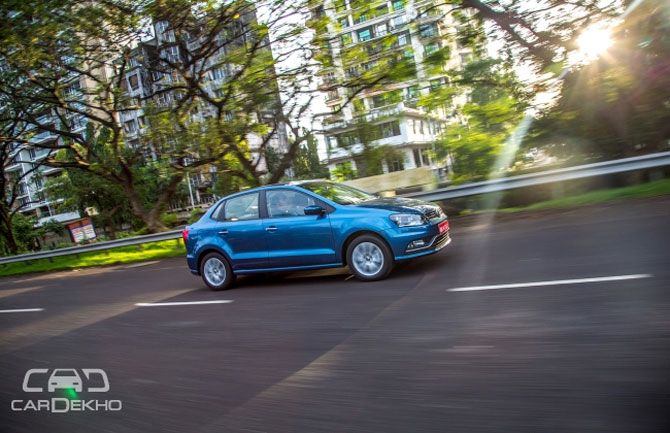 There's also a delicious flipside to the gearbox. Slot it into 'S' and it pokes all the 110 horses at once. It will hold on to revs right up to where the punchy mid-range ends and hurl itself towards the horizon questionably quickly.

The Ameo is easily among the fastest compact sedans we've driven, with the Ford Figo Aspire coming in a close second. At the risk of stating the obvious, efficiency will take a beating in Sports mode, so don't get too carried away at the streetlight drags. 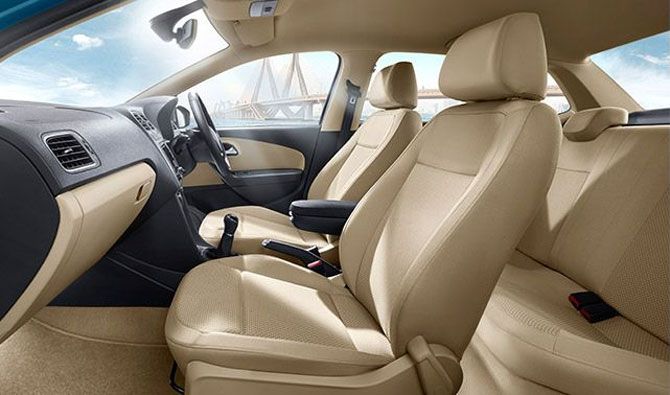 Speaking of which, the manual feels outright bonkers too. Once you get past the initial turbo lag that lasts upto - 1500rpm, the revs quickly climb.

You can also get away with being lazy and not downshifting whilst slowing down. There's ample torque in reserve for it to not stutter and cough for a lower gear.

Just like the Polo, the gear throws are short and the action is positive and sure-slotting. It is oddly pleasing to wring the daylights out of the manual, but the heavy clutch will take a toll on your left knee.

It is definitely the heaviest in its class, which is likely to make in-city commutes a tad troublesome. There's also a slight 'clicky' feeling on the clutch pedal that takes some getting used to. But, we'd happily trade our left leg for some usable performance, and the Ameo seems to be happy accepting sacrifices too. 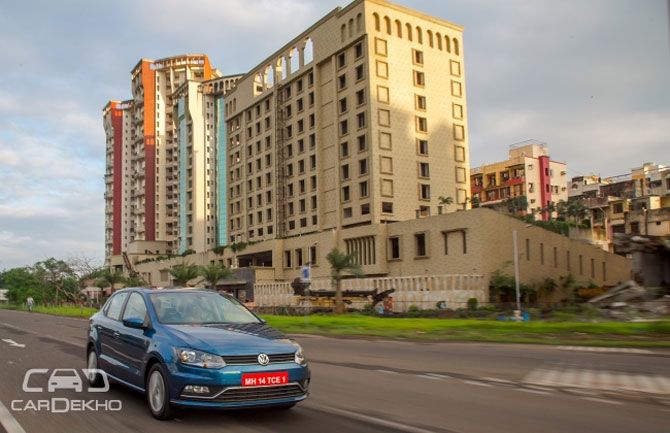 When you just want to sit back and relax, the potent engine lets you do that as well. It can carry speeds well in excess of 100kmph easily, and all day long at that. Ring in the services of the cruise control, and you are left with the reins of the steering and the brakes. The little Volkswagen can be a worthy option for anyone looking for a compact sedan to go touring with the family. 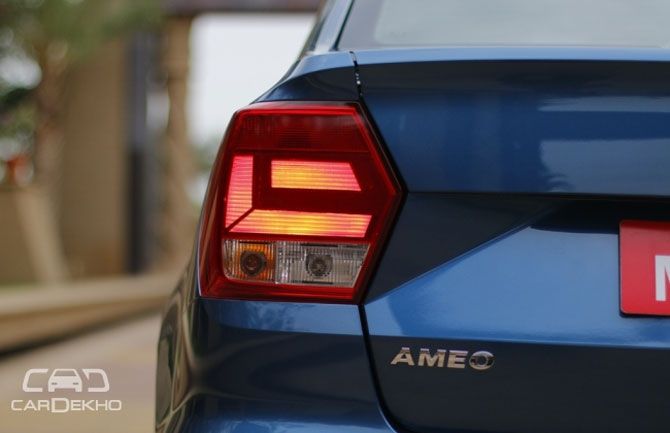 As is the case with most Volkswagens, the suspension is set up to be stiff. In fact, it felt a tad stiffer than my GT TSi too, possibly to compensate for the heavier engine up front.

As a result, low-speed ride quality isn't as pliant as you would hope. While the cabin isn't put off by potholes, it will crash and thud over every single undulation you come across. The upside, of course, is that you are rewarded when you chuck it into a corner.

Roll is minimal, and it dives in obediently. We'd have loved a little response from the steering, but it is nearly as good as electric power steerings can get - so I guess, we'll just have to make peace with this. 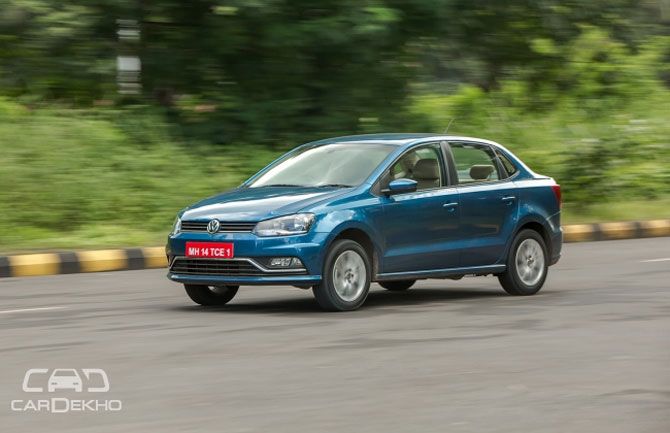 Those used to a Maruti or a Hyundai will find the steering to be quite heavy at low speeds. As the speeds climb, you will appreciate the steady steering a lot.

It feels no different than the bigger Vento, riding flat with a composure only German cars manage to pull off. The stock tyres do a decent job harnessing the power, but we'd recommend an upgrade in case you plan on doing a lot of highway trips, purely because of how noisy they get. 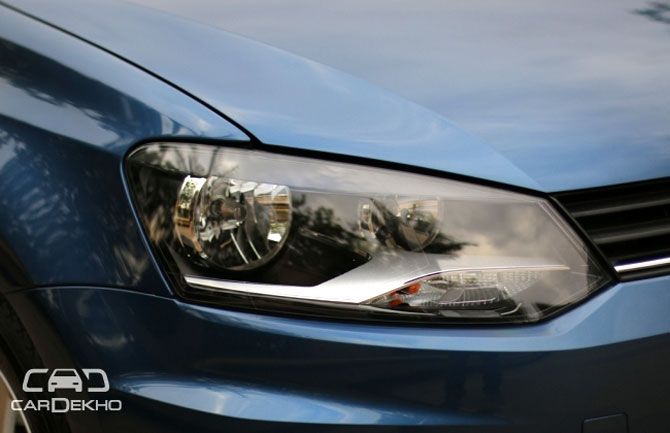 Being front heavy, there's significant nose-diving under heavy braking. That said, the Ameo doesn't stray out of line one bit. Safety is kept in check too, with anti-lock brakes and airbags being standard across the range. Good move, VW! 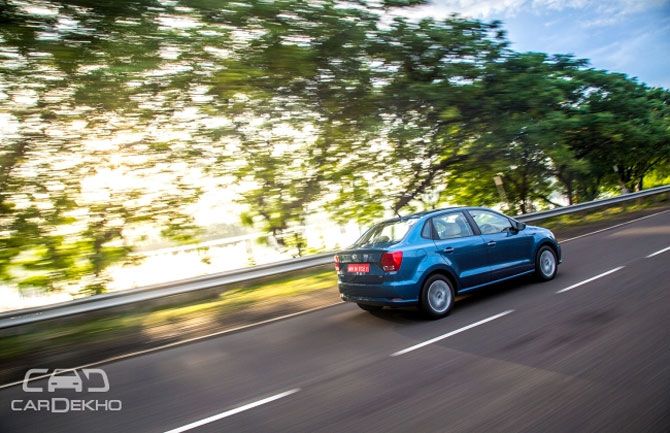 Like we said at the outset, the only perceptible gap in the Ameo lineup has been plugged. The German accountants must've miscalculated something because they seemed to have priced the compact sedan to be cheaper than the Polo hatchback it is based on.

We're told there's a significant amount of localisation that's gone into achieving the lower price, and we have to admit it is brilliant (no matter how briefly the pricing stays put).

Is it THE compact sedan to buy? We'd have to revisit it with its rivals once more just to be sure. But on the face of it, that does seem like the case.