Third-gen Hyundai i20 is a leap forward for Korean carmaker

The latest Hyundai i20 is an exciting car, given the overall drive experience, transmission, ride quality and tech.

And while it may not be as low cost as a Maruti or come with the "heavy German steel-feel" of the Volkswagen, it does carve out a niche for itself at pole position with a combination of technology, styling, drive and ride comfort, and low cost of ownership, says Pavan Lall. A little over a decade ago, premium hatchbacks were all the rage with the trend having been kicked off by the Skoda Fabia.

Not only did the Fabia set a new benchmark with its European build quality and top-notch interiors but it also opened the floodgates for other car-makers to follow suit with a version of their own "hot hatches".

Fiat brought in Punto, Volkswagen came with Polo, Honda its Brio, Maruti Suzuki the Baleno, and so on.

Hyundai rolled out its first-generation i20 in 2008 as a premium offering in addition to the other compact vehicles it sold such as the Santro, i10 and Getz.

The launch triggered what would become a successful market share driver for the company as a stylish, premium option. The i20 has sold over 1.3 million cars worldwide, with more than 70 per cent of those numbers coming from India.

It is one of the few models for any manufacturer to consistently sell over 10,000 units monthly.

Now in its third generation, the new i20 comes as a leap forward for the Korean player for a number of reasons. For one, it's pushing the envelope on price.

The new i20 petrol top-of-the-line version costs over Rs 11 lakh (ex-showroom) -- almost as much as what an entry-level, three-box car like the Honda City cost a few years ago.

Two, the i20 comes with tech and features that are unexpected for its size category: Automatic seven-speed gear shift, sun-roof, larger trunk, tire pressure monitors, edgy Z-shaped tail-lights, improved rear-seat space, a 10-inch infotainment system, and Bose sound speakers (the last one is in the top variant).

There's also an air freshening device, which is both novel and utilitarian especially in cities like New Delhi where air quality is a concern. 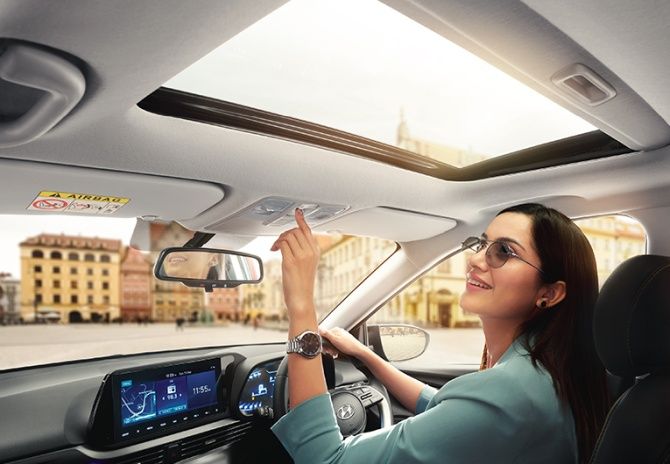 Not only do the dashboard, air convents, steering-mounted controls and the automatic gear shift feel as though they belong to a car a size or two bigger, but they also beckon a new reality that confronts automobile manufacturers –– the commoditisation of technology and its trickle-down effect on cars across segments.

Though the latest safety ratings for the i20 aren't available yet, the safety features include six airbags (two in the front), VSM (vehicle stability management), ESC (electronic stability control), ESS (emergency stop signal), and hill and rear camera.

The vehicle is built on the K-platform with 66 per cent high-strength steel, making it sturdy. The i20 is compact, easy to manoeuvre and smooth, especially the one with the silent petrol engine.

The car comes in a number of variants -- as many as 13 to be precise, across a range of prices that start at around Rs 7 lakh and go all the way up to over Rs 11 lakh.

It's no secret that SUVs and larger cars have squeezed the midsize sedan out of the game but smaller cars, especially the compact hatch segment that is big on both safety and features, still have plenty of takers. And that is why the segment isn't without competition. So how does the new i20 stack up against competitors, which include the Tata Altroz, Toyota Glanza, Honda Jazz, Volkswagen Polo and the Maruti Baleno? It's an exciting car, given the overall drive experience, transmission, ride quality and tech.

And while it may not be as low cost as a Maruti or come with the "heavy German steel-feel" of the Volkswagen, it does carve out a niche for itself at pole position with a combination of technology, styling, drive and ride comfort, and low cost of ownership.