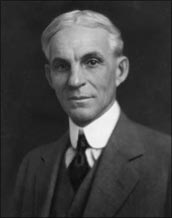 For more than a century now, Ford Motor Company has been selling mass produced automobiles around the globe. One of the big three American manufacturers, Ford has attracted millions of loyal customers with their wide range of products that offer value for money.

The story of Ford begins in the year 1893 when Henry Ford (left), working at Edison Illuminating Company at the time, succeeded in building his first working gasoline engine. On June 4, 1896, Ford finished his first twin cylinder vehicle, the Quadricycle.  In 1899, he left his employment and joined the Detroit Automobile Company but, serious production never got underway here and the company was closed in 1900.

Meanwhile, Ford further fine tuned his invention and in 1901 he won a high-profile car race at Grosse Pointe, Mi. This success encouraged his previous backers to once again start the Henry Ford Company in 1901 with Ford as the chief engineer, however problems again intruded and Ford left the company in 1902 whereupon the company was renamed the Cadillac Automobile Company.

The start of Ford as a company begins in 1903 when the Ford Motor Company was incorporated with 11 original investors. The same year the Model-A "Fordmobile" is introduced at an affordable price of 850 dollars and the first model sold on July 20, 1903. The model was a hit, mainly due to its economic pricing and Ford went on to sell 1708 cars of this model.

Meanwhile other developments were taking place within the company. In 1911, Ford opened its first manufacturing unit outside America, in Manchester, England. In 1917, Ford introduced its first truck, the Ford model TT. Also in 1919, Henry Ford's son, Edsel took over as the president of the company.

In 1922 Ford made its first major acquisition taking over the Lincoln Motor Company, started by Henry Leland. This also signalled the entry of Ford into the luxury market. By 1926, The Model TT had captured over 51 per cent of the American truck market. Also another major development that took place during this time was the introduction of the Ford Tri Motor airplane for airline services.

In 1928 the Model A was introduced and was an instant success. By the time production ceased in 1932, more than five million vehicles had been sold. Meanwhile in 1929, Ford crossed another milestone with an annual payroll of 300 million dollars.

The year 1931 was a bad year for Ford with production plummeting to 615,455 allowing Chevrolet to become first in the US market. The Ford V-8 was introduced in 1932 with the intention of boosting its flagging sales. In 1938, a new division Mercury was started in order to bridge the gap between the luxury Lincoln class and the economical ford class.

In 1941, Ford made its first foray into defence production, making general purpose jeeps for the military. By 1942, all production of civilian vehicles were halted, completely diverting  factory capacity to producing B-24 Liberator bombers, tanks, and other products for the war effort.

1943 saw the demise of Edsel Ford whereupon Henry Ford assumed the Presidency temporarily till 1945 when Henry Ford II stepped into his grandfathers shoes. In 1948 the Ford F1 truck was introduced and 1949 saw the introduction of all new post war era vehicles such as the "Woody" station wagon and the luxury car Thunderbird.

The idea worked as by 1953, the sales of Ford were only 100,000 cars behind Chevrolet. This year marked another milestone being the 50th anniversary of Ford. All cars produced this year have a special anniversary emblem incorporated in them.

The year 1957 saw  the re emergence of Ford as the top selling brand with the sale of 1.68 million automobiles and the introduction of the Skyliner model with an all steel hardtop  capable of changing into an open convertible at the touch of a button. An automatic folding mechanism retracted the top into the rear deck.

Despite being one of the most expensive models of Ford till then, the Retractable sold around 21 000 pieces before production stopped in 1959. 1959 was a remarkable year for Ford marking the production of 50 million cars. This year also saw the start of the Ford Credit Corporation, created with the purpose of automotive financing.

1964 saw the introduction of the Mustang. 1 million Mustangs were built within the first two years itself. This year also saw the start of production in South Africa. In 1968, Ford merged its Britain and German divisions to form Ford of Europe. This was followed by the establishment of its Asia Pacific operations in 1970.

In1979, Ford acquired a 25 per cent stake in Mazda. 1980 saw the introduction of Escort which set the world record for the fastest 1 million units sold. Further, in 1987, Ford acquired Aston Martin and Hertz Rent - a - car, followed by the purchase of Jaguar in 1988. The following years saw a lot of new cars such as the Explorer, Expedition, Navigator etc.

The next major development to occur in Ford was in 1999 with the establishment of Jaguar racing team in Formula 1.Even before the acquisition, Ford was heavily involved in Formula One racing with Ford badged engines winning 167 Grand Prix between the years 1967 to 2003. Ford is also one of the four manufacturers involved in the NASCAR series as well as a leading force in the world Rally scene.

Further in 1999, Ford completed the acquisition of Volvo while in 2000, Ford purchased land Rover from BMW. 2003 saw the centenary celebrations of the Ford Motor Company. The Ford GT was introduced to commemorate this occasion

However the new millennium has seen a downturn in profits for this brand. Increased healthcare costs for an ageing workforce, over dependence on SUVs, increasing gasoline prices have all been blamed for this decline which is not unique but rather a trend seen in the automobile industry in general. Ford has sold Aston Martin, Jaguar and Land Rover in an attempt to minimise losses. The latest designs by Ford are focussed on Hybrids such as the Ford Escape hybrid SUV.

'The Way Forward', a restructuring plan envisaged in 2005 which includes resizing the company to match current market realities, dropping unprofitable and inefficient models, consolidating production lines, and shutting fourteen factories and cutting 30,000 jobs is currently being implemented. Ford's target is to become profitable again by the end of 2009. Knowing the legacy that is Ford, it can be safely said that success is just around the corner.

BankBazaar.com is an online marketplace where you can instantly get loan rate quotes, compare and apply online for your personal loan, home loan and credit card needs from India's leading banks and NBFCs.
Copyright 2021 www.BankBazaar.com. All rights reserved.