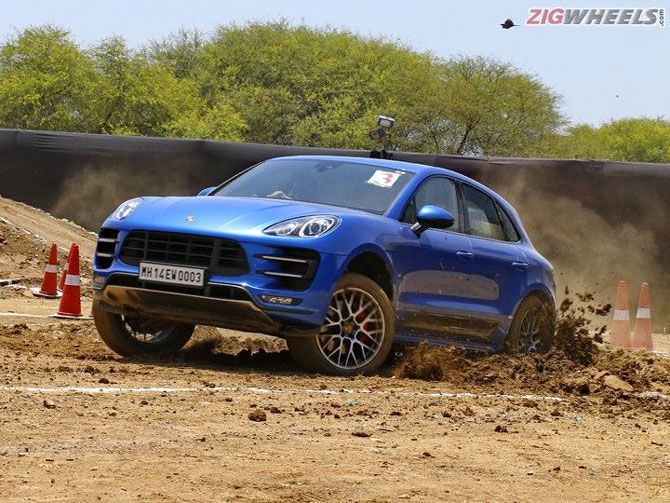 Something that can sprint from a halt to 100kmph in a mere 5 seconds is normally under sportscar territory. But what if you get these numbers from a 3.6-litre potent motor packing four hundred horses under the hood of an SUV? What you get is a really fast crossover on wheels i.e. the Porsche Macan Turbo.

But its task for the day was not to belt out the race track. Instead, a man-made off-road course beckoned to test its true non-tarmac skills. With due caution, we made this fast yet compact Porsche stand ground at the starting line. 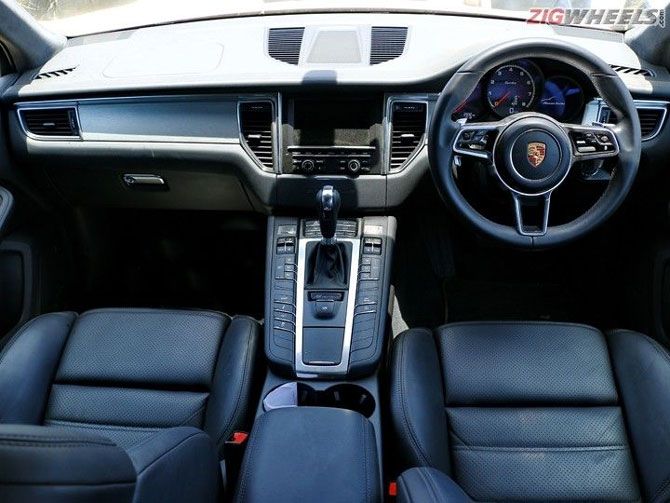 Even before we begin this quest, one has to take notice of the remarkable cabin that just cocoons the driver and the occupants with ease. With the air-conditioning set to 24-degrees, you can just ignore the blistering heat of a typical Mumbai afternoon clubbed with the humidity on the track.

With everything set, we prepare the Macan for the immediate thrust and await the marshal’s approval to sprint this baby Porsche. Observed from the cabin, despite his fancy sunglasses, he doesn’t seem to be a fan of the climate outside. On the contrary it’s getting cold inside, or it might be the excitement building up. Taking a glance around, the sublime leather upholstery and the luxury-filled German gadgetry makes you think twice before attempting what we were to do next.

Nevertheless, putting all of that to rest, at the count of three, we stepped on the gas but not all-out flat. The humongous power from its V6 petrol motor gets transferred onto the wheels. It’s just enough to prevent wheel-spin on the undulated gravel. Man! Even with this short stint, you can feel the Turbo roar leaving behind a dust brigade. 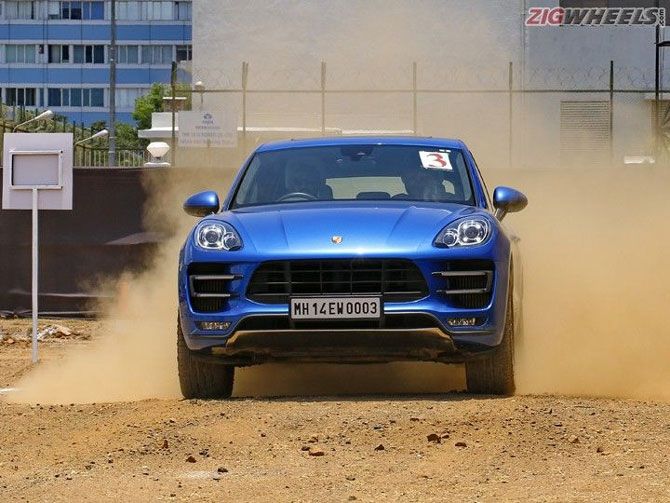 Not one but twin-turbochargers on the Macan makes ‘lag’ an obsolete term. That, coupled with its precise and fast 7-speed PDK transmission, makes the best use of 400 horses under the hood.

Although this ‘god-like’ moment couldn’t last long enough and we had to hit the brakes hard as we ran out of road. A quick look at the rear mirror and we could see the yellow haze travelling with us that eventually engulfed the entire blue SUV with a reddish brown colour. Something off-roaders would drool for. The above narration is a story of few seconds inside the Macan. That brought the first stage of this off-road course created by Porsche India at the Bandra-Kurla Complex in Mumbai to a halt.

These efforts from Porsche India are to showcase the core strength of their SUVs. The message is clear – it’s not all show, but the SUVs, basically Cayenne and the Macan, pack substance as well taking on non-tarmac surfaces with ease. 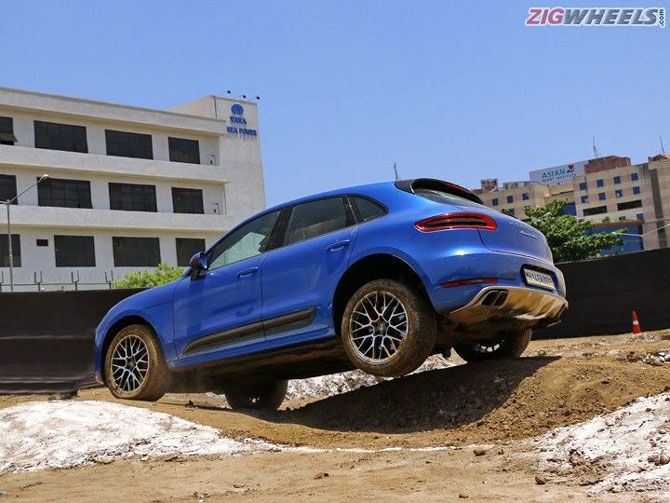 Set again for the next challenge, following a sharp turn on the right we encountered a steep climb. To tackle it well, all we had to do is to set up the baby SUV for the off-road mode with a click of a button.

This essentially increases the ride height making use of its air-suspension while the chassis and brakes also firm up.

Once at the top of the manmade hill, we couldn’t help but remember its Rs 1.1 crore price tag as we could only see the edge of the bonnet which was pointing high to the bright blue sky. With half of the work done, we made it safely onto the apex. Now, it was just downhill from here. Just when we thought all is well, as we carefully made the Porsche descend modulating pressure on the brakes, we heard a distant voice. “Blue car! Turn on the Hill Decent mode!” the annoyed marshal started yelling.

But it was a little too late by then. Taking into account the Off-Road and Hill-Hold assist system on offer, the Macan also offers Hill Control system that makes life easy for you by taking over the brakes so you can put all your attention on the steering wheel without making contact with the foot pedals. All you have to do is to trust the system and glide down the hill. 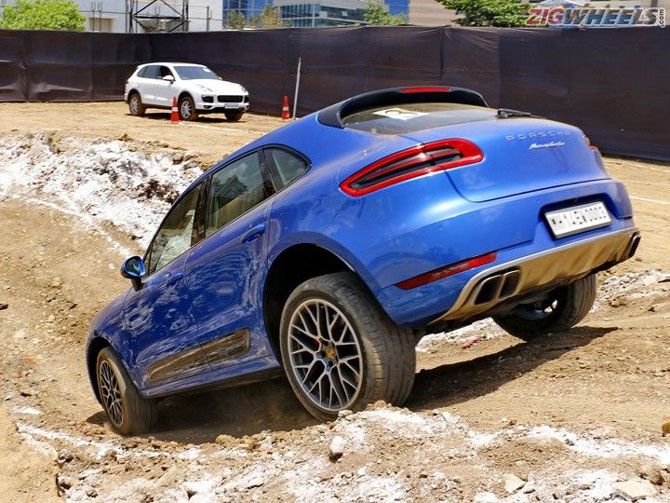 Our encounter with the marshals kept increasing gradually as we were reminded yet again to go slow this time. Making great use of Porsche Traction Management (PTM) and the permanent all-wheel drive system, we took another sharp right hovering over mud and slush. And how could we miss this great photo op, so we stepped onto the gas to get some mud flying making the SUV slide. Next in line was a 30-degree side incline which was quite a breezy affair. This lead to a double drop ditch where the Macan did flex its muscles by going deep in a canal and coming back up to the ground level.

This continued for the next drop as well, as it disappeared on lower grounds and surfaced again at the top. The rollercoaster ride takes you back to the amusement park, but then again, we do remember the price tag, don’t we? So no fooling around in this tricky challenge. The course became a little more serious gradually with both positive and negative-side inclines along with a tough axle-breaker patch. After all, it’s not every day when you take a Rs 1 crore plus German SUV on a non-tarmac course to fancy some serious off-road manoeuvres. We are better off taking those Tata Safaris and Mahindra Scorpios on unchartered territories as the suspension is more prone towards taking on bad roads and at the worst repair bills can fit your wallet.

But on the upside, we were not really worried as the cars we were driving were a part of Porsche’s media fleet, which meant all maintenance bills will go to Porsche’s account. 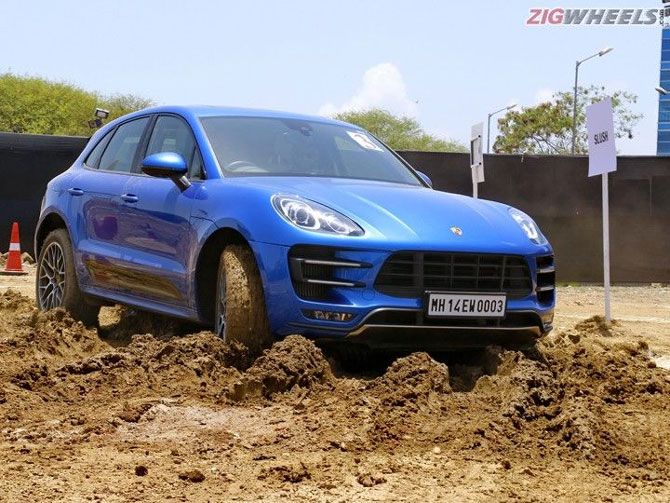 Towards the end of this fantabulous drive, we can surely say we made most of the blistering heat. After all, taking a Porsche Macan to its extremes on a customised course at the heart of the city is way better than hammering words from a keyboard in the office.

One thing that was pretty much evident from this outing was Macan’s capability. Apart from being luxurious, fast and expensive, it can take a serious beating any time of the day and can come out smiling with its head held high. So, yes, the Macan can go off-road, but that doesn’t really mean you should.