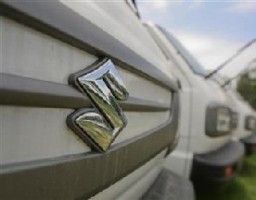 Maruti Suzuki India's recent update on the Gujarat plant, proposed to be implemented by its Japanese parent Suzuki Motor Corp, is ‘razzle dazzle’ and the transaction adds to the complexity of the operating structure, according to proxy advisory firm IiAS.

The proxy advisory firm's latest comments come within days of Maruti saying that it expects to save about Rs 10,500 crore (Rs 105 billion) in the first 15 years by not investing in the Gujarat facility.

Institutional Investor Advisory Services on Monday said the recent update, details of the term sheet of the Contract Manufacturing Agreement and the Lease Deed, and the road shows Maruti plans to conduct, are a ‘mere razzle dazzle’.

Noting that the transaction adds to complexity of the operating structure, the proxy firm said, ‘the balance of power, already in favour of Suzuki, will now tilt completely towards them and Maruti will have lost control over its own destiny’.

Last week, Maruti Suzuki India -- which agreed to let parent Suzuki Motor Corp own an upcoming plant in Gujarat -- had said it expects to save about Rs 10,500 crore (Rs 105 billion) in the first 15 years by not investing in the facility.

With regard to the contentious Gujarat plant, the company had said it proposes to enter into a CMA with Suzuki Motor Gujarat, a fully owned subsidiary of Suzuki Motor Corporation.

Suzuki Motor Company, Japan (Suzuki), which owns 56 per cent of Maruti and 100 per cent of SMG, seems to be shifting the rationale for the deal, the report said.

"The announcement says that with this deal, Maruti's importance to Suzuki will increase.

“That would be true if the Gujarat plant was housed within Maruti -- in this structure, India's importance as a market increases for Suzuki, but not Maruti's specifically.

"Moreover, Maruti is already important to Suzuki: it accounts for over 50 per cent of Suzuki's overseas automobile sales and 30 per cent of global volumes (including Japan)," it added.
© Copyright 2022 PTI. All rights reserved. Republication or redistribution of PTI content, including by framing or similar means, is expressly prohibited without the prior written consent.