News
Business
Movies
Sports
Cricket
Get Ahead
Money Tips
Shopping
Sign in  |  Create a Rediffmail account
Rediff.com  » Business » All you want to know about the Honda Brio facelift

All you want to know about the Honda Brio facelift

Honda has taken its own sweet time to revamp the little Brio.

When it first graced showrooms in 2011, it was met with mixed responses. Five years and 87,000 units in sales later, there's a facelift.

The update comes just in time for the festive season, and injects the hatch with much needed vigour to take on competition. Do the changes make the Brio any better? 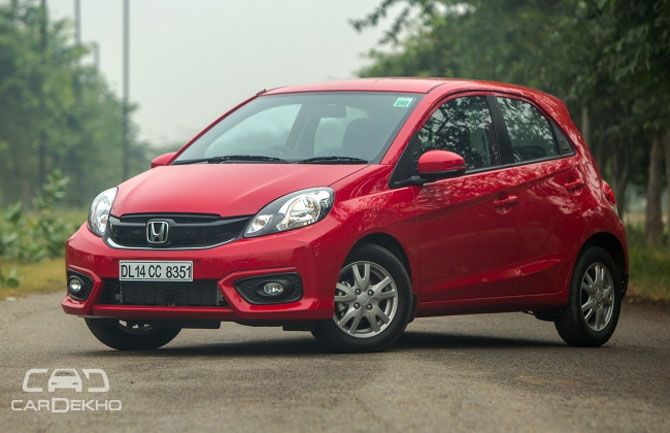 A quick glance at the 'new' Brio and you quickly realize the updates are minimal. Honda hasn't gone to town updating every single panel and trim. What you get instead is a revised face courtesy the new bumper and the grille.

The design shift isn't too radical even then, considering we've seen the same combo on the updated Amaze a couple of months back. Unlike the sedan, the grille on the hatch is finished in gloss black.

It looks especially nice in a bright shade such as the red you see in pictures. Sadly, that's the only fun colour on offer. Other colours include two whites, a grey and a silver. For a hatch that is targeted at the young, we're slightly surprised there isn't a bright blue or a cool green on offer. 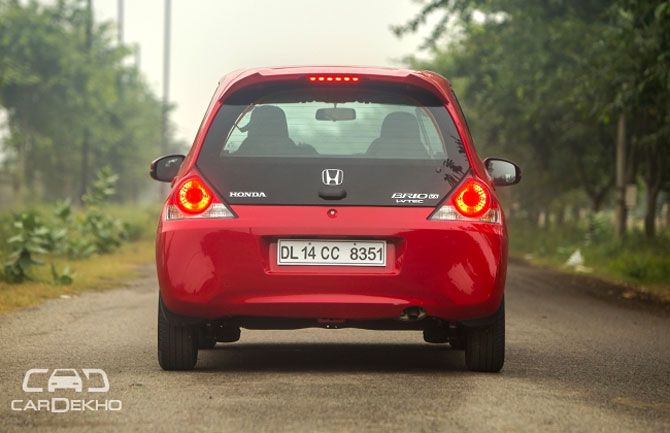 The side profile remains untouched. Details such as the sharp character line running across the length, wing-mirror mounted indicators and the 15-inch alloy wheels add some zing to the design.

Honda could have used the facelift to give the Brio a new set of wheels, or maybe even go the whole hog and offer an RS variant, but that sadly isn't on the agenda this time round.

The rear features the Brio's party piece, the all-glass hatch. There are two minor updates here as well, which most would miss if not pointed out. The top-spec variant gets a stubby spoiler with an integrated high-mount stop lamp, and the taillamps have slightly different detailing too.

Like we said, there isn't much to talk about on the outside, but the interiors do feel completely different.

The biggest and most obvious change is the new dashboard. It is no different compared to what we have already seen in the Amaze, and, predictably, quality levels are on par as well.

The all-black dashboard gets dabs of dull-silver and carbon-fibre textures to break the monotony.

Notably, it's only the top-spec variant that get black door pads and black fabric on the seats. Every other variant gets beige instead. Other than the updated design, there's very little that's been added in terms of kit. 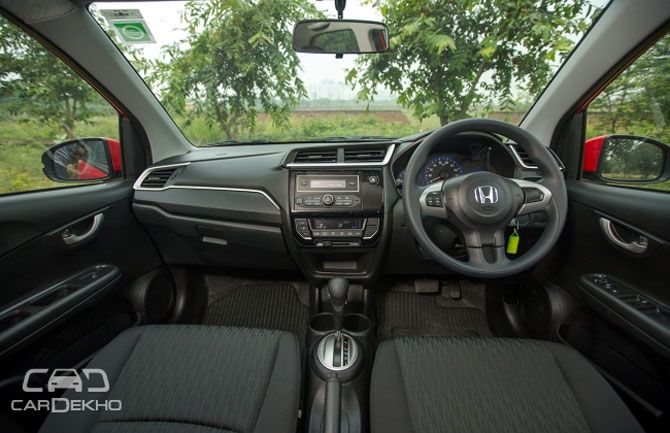 The old circular knobs for the air-conditioning have been replaced by a slick looking panel that features vertical buttons.

Mind you, there's no automatic AC on offer here, just an easy to use interface that lets you set the temperature and fan speed.

There's a 'Max Cool' function too, that automatically sets the unit to the lowest temperature and the highest fan speed.

The air-conditioning is an absolute chiller, and one won't really feel the absence of rear vents. 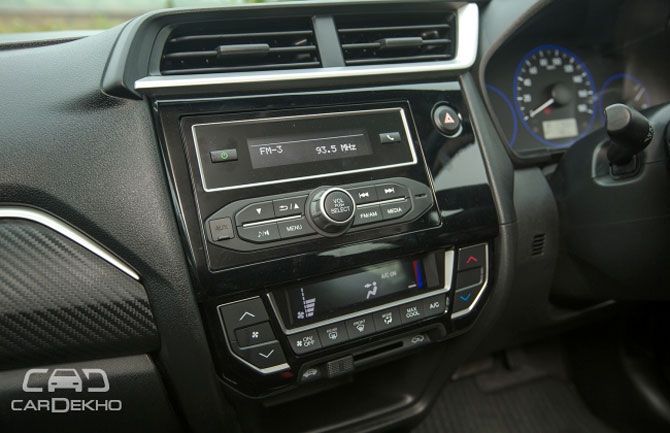 The other big update is the 2-DIN audio system, which supports USB and Bluetooth.

There are steering-mounted controls too, and audio from the four speakers is acceptable.

What we do not like, is the sheer amount of blank space on the centre console, especially around the new music system.

On a related note, the gloss black finish is a fingerprint magnet too. 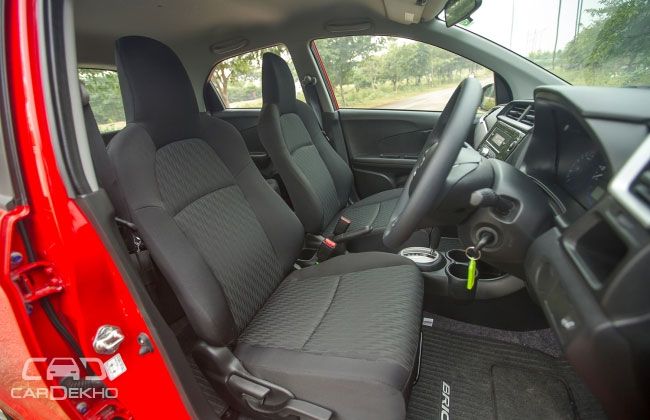 The feature list also includes a new instrument cluster with a white backlight. It is split into three pods, for the tacho, speedometer and the fuel gauge respectively.

A basic MID sits under the speedo. Everything else remains practically unchanged, which means you get the same comfy seats (yes, the headrests are still the integrated variety) and the enthusiastic driving position.

Space in the rear bench isn't a strong point compared to a Hyundai Grand i10, or even the Nissan Micra for that matter, and the relatively narrow dimensions make it a four-seater.

There's still just enough room for a six-footer like me to sit behind my own driving position, but the slightly upright backrest angle might get taxing over long distances. 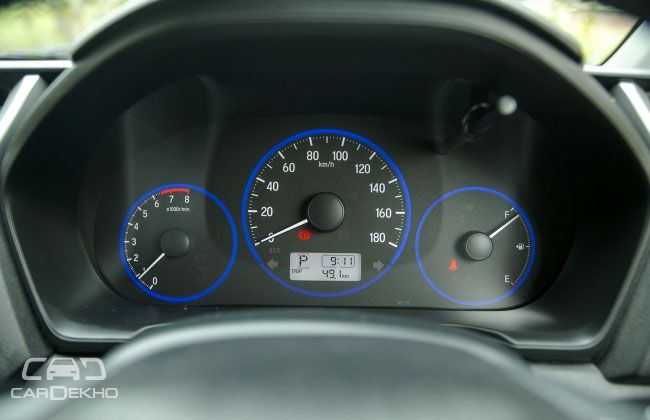 Turn the key and the 1.2-litre, four-cylinder comes to life with the sound of... absolutely nothing. Refinement has always been a strong point with Honda engines and this one is no different.

The engine barely mutters as it goes about its business. As is the case with all i-VTEC engines, this one loves to be taken all the way to the redline.

Putting pedal to the metal in a little hatch isn't on everyone's to-do list, but it is fun in the Brio. 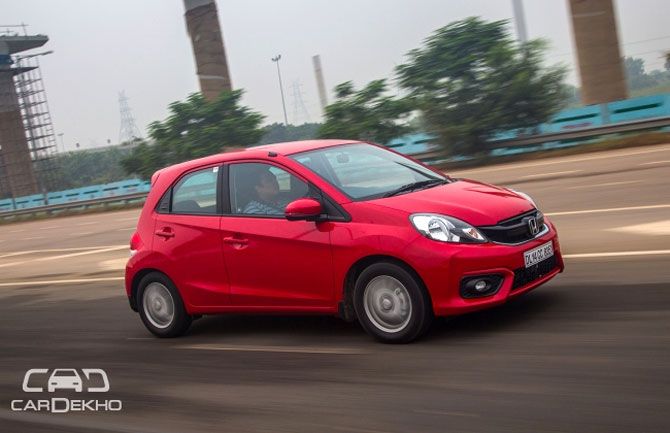 Low-end grunt feels weak, which means you will have to downshift for those speedbreakers and to exploit the little gaps in traffic.

Most of the power is reserved in the top half of the rev range, and you'd have to rev the socks off it to extract any sort of performance.

When it is at its 6500rpm redline, though, it does sound sweet.

Of course, there's the 5-speed torque converter automatic on offer as well.

The gearbox upshifts very early, and you wouldn't notice any shifts shocks or even lag for that matter. It feels unpolished only under hard acceleration, where it takes a while to swap cogs. Notably, there's no pure manual mode or paddle shifters on offer. 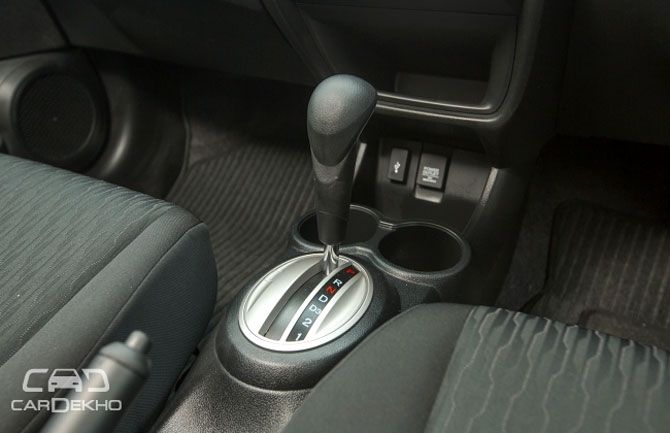 The motor is potent enough to cruise at triple digit speeds all day long. And the ride is planted enough to carry the speeds as well.

Within the confines of the city too, the softly sprung setup does a nice job of tackling potholes.

There is a hint of roll when you corner overzealously, but the steering is as tack sharp as ever.

The chunky little wheel is just what you need in choc-a-bloc traffic. It is just the right weight to flick around in the city and is confidence-inspiring on the highways too.

The turning radius is just 4.5 metres (4.7 for the automatic), which tells you how city-focussed the Brio actually is.

Corner hard in the little Honda and the steering feels precise and has ample feedback to not keep you guessing what the wheels are up to.

That said, we would have liked slightly grippier tyres as these squeal and protest a bit too easily. 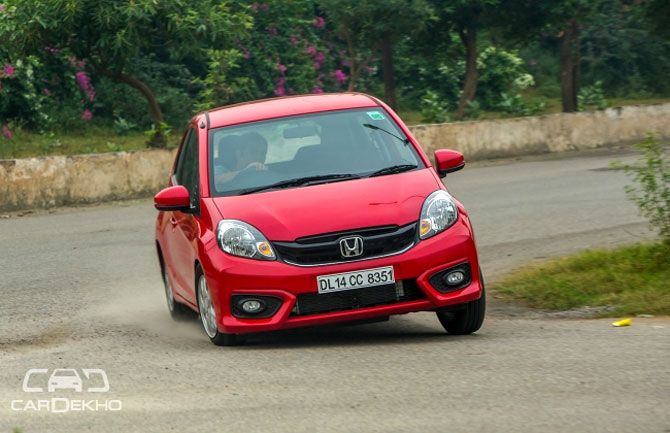 What we particularly like, is how easy it is to drive the Brio. The clutch is light and so is the steering.

The driving position coupled with the compact proportions means you exactly know where the four corners of the car are.

It's a great first car in our books, but Honda's statistics say otherwise. In fact 66 per cent of Brio buyers are rich families looking for a second car from a reputable brand. 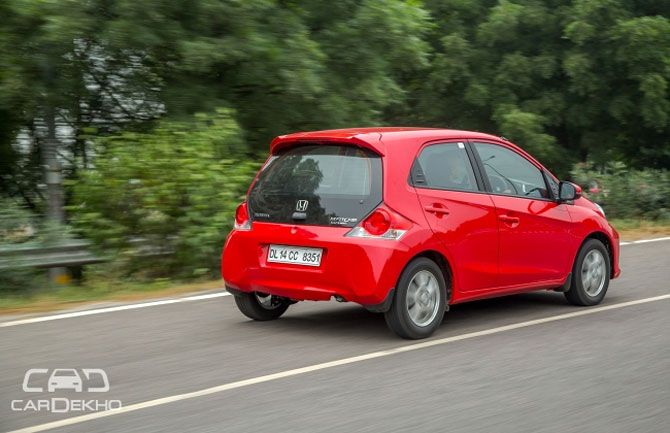 The update isn't significant enough to make a huge difference. Yes, it does give the Brio a shot in the arm to go head to head with the new crop such as the Swift and the Grand i10, and it is just as fun to drive as it always was.

Like Honda pointed out, the Brio does make a very strong case for itself as the secondary (or even tertiary) car for a family, that wants nothing more than a nippy city runabout and the bragging rights of the Honda badge. 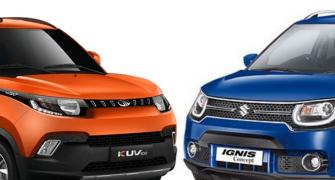 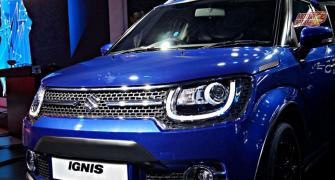 The Rs 5.5 lakh Maruti Ignis likely to hit the roads by November 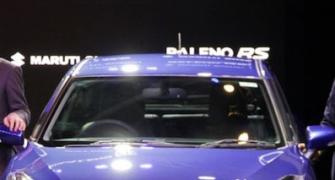 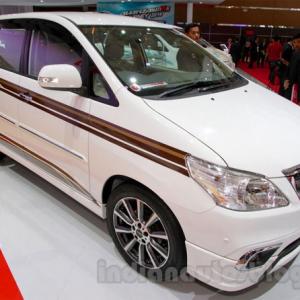 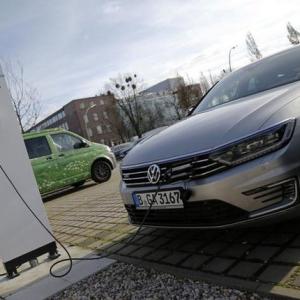