Auditors frown on DLF's take on business advance to Vadra

Auditors and chartered accountants that Business Standard spoke to are not convinced with real estate company DLF's clarification that it had given a  "business advance" to Robert Vadra, son in law of Congress president Sonia Gandhi, and that there was no quid pro quo between the two. 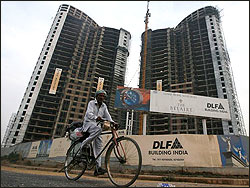 While those who spoke to this newspaper for this story did not want to be named, many other large audit firms refused to comment on the matter citing "client confidentiality".

A senior partner of a leading audit firm pointed out that the accounting rules do not permit companies to give interest-free loans even to their subsidiaries, leave alone anybody else. Even as DLF is claiming that business advance, and not unsecured loan, was given to Vadra's company, the realtor has not done enough to give specifics about the business for which an advance was paid, he said.

Another chartered accountant, who also did not want to be named, argued that if an advance amount is refunded without the business maturing, there's always a doubt about the nature of the transaction. He was referring to the Faridabad land deal, that DLF found legal infirmities with at a later stage and Vadra's company, Skylight Group, refunded the Rs 15 crore "advance". DLF has not shown any papers yet on any of the deals with Vadra, he said, adding that the company may however do that over the coming days.

According to analysts, the going rate of interest for loan or advance in the real estate sector is anything between 14 per cent and 18 per cent. In this case, no interest has been charged.

Another auditor, who too did not want to be named, said for DLF to give a business advance to Vadra's company, there must have been prior linkages between the two. "Interest is not the only aspect to look at here, the alleged nexus between Vadra and the real estate company should be investigated too," he added.

In a point by point clarification to India Against Corruption allegations on DLF-Vadra nexus, the real estate company on Saturday had said the business relationship of DLF with Vadra or his companies, was completely transparent and at an arm's  length basis. "Our business relationship has been conducted to the highest standards of ethics and  transparency, as has been our business practices, all around."

The company denied that it had given any unsecured loan to Vadra or his companies, claiming an amount of Rs 65 crore (Rs 650 million) was given as business advance for the purchase of two pieces of land from Vadra's Skylight group.

DLF gave an advance of Rs 50 crore (Rs 500 million) to Skylight Hospitality against a piece of land at Sikohpur village, Gurgaon, in 2008-09, the company said. DLF bought the land for Rs 58 crore (Rs 580 million), according to its statement. Subsequently, Skylight Group of companies offered DLF an opportunity to purchase a large land parcel in Faridabad in 2008-09, and DLF  agreed to advance Rs 15 crore (Rs 150 million) in instalments.

"After concluding that, the said land had certain legal infirmities, we decided against its purchase. Accordingly on DLF's request, the Skylight group refunded the advance of  Rs 15 crore in totality," said DLF in its statement.

DLF further said, "at no stage was an interest free loan ever given to the Skylight group. There were two sets of business advances against purchase of property , one of which amounting to Rs 50 crore resulted in a satisfactory conclusion of purchase of commercial land and the second advance of Rs 15 crore was fully refunded."

Nivedita Mookerji in New Delhi
© Copyright 2022 PTI. All rights reserved. Republication or redistribution of PTI content, including by framing or similar means, is expressly prohibited without the prior written consent.