Tech giant Apple on Monday said it is undertaking a detailed investigation following the violent incident at its supplier Wistron's Narasapura facility in Karnataka last week. 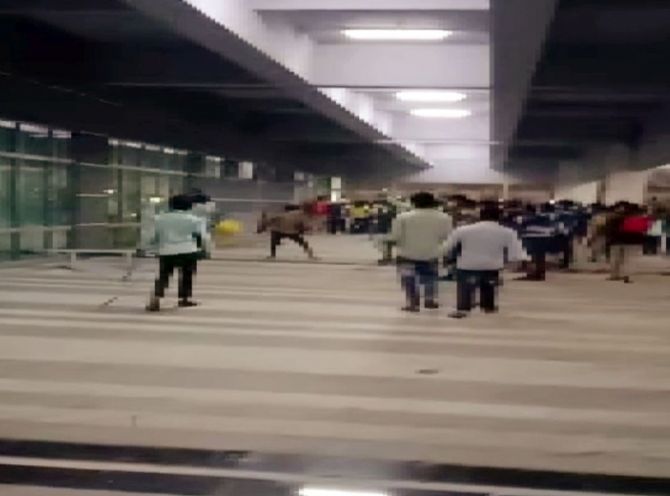 A section of workers at Wistron Corporation's manufacturing facility in Narasapura Industrial Area in Kolar district near Bengaluru went on a rampage on Saturday over non-payment of their wages.

Taiwan-headquartered Wistron Corporation has said it suffered losses worth Rs 437.40 crore in the incident.

"Apple is dedicated to ensuring everyone in our supply chain is treated with dignity and respect. We have teams on the ground and immediately launched a detailed investigation at Wistron's Narasapura facility in India. We are also dispatching additional Apple team members and auditors to the facility," Apple said in an emailed statement.

Its teams are in close touch with the local authorities and it is offering full support to their investigation, it added.

The Cupertino-based company has a strict supplier code of conduct and follows up on any reports of violations.

In 2019, it interviewed more than 52,000 supplier employees as part of its supplier assessments.

Apple, in its supplier code of conduct, states that suppliers must meet all legal requirements relating to wages and benefits, including paying accurate wages in a timely manner.

"In addition, the use of wage deductions as a form of disciplinary measure is prohibited. All use of temporary and outsourced labour shall be within the limits of the local law," it adds.

In November, Apple Inc had suspended new business with one of its suppliers Pegatron Corp after labour violations were reported.

Wistron said a large number of employees allegedly carried out arson, loot and violence at its Narasapura manufacturing plant, damaging the building and vehicles, and damaged costly equipment including machines and computers. The police have so far arrested 149 people and detained a few others.

Besides the iPhone, Wistron also manufactures IT products for Lenovo and Microsoft, among others.

Wistron is one of the 16 entities to have received approval for incentives under the government's production linked incentive plan. Currently, iPhone XR and iPhone 11 are being assembled by Foxconn in Chennai, and iPhone 7 by Wistron in Bengaluru. The Kolar facility assembles the latest version of the iPhone SE.

"This is primarily because there is enough iPhone SE 2020 inventory available in the market. It is pertinent to note that the iPhone SE 2020, along with the iPhone 11 contributed to as much as 70 per cent of Apple's iPhone shipments in Q3 2020," he added.