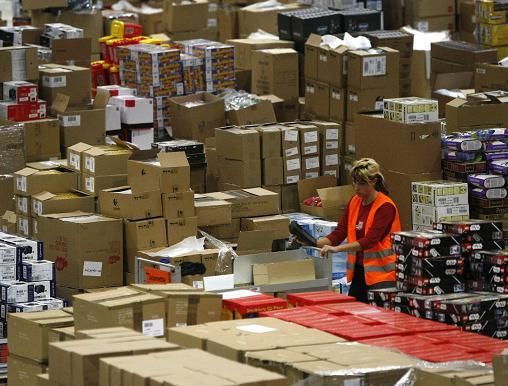 E-commerce giant Amazon.com is taking lessons learnt from its daily battles with India's choked roads and cramped cities to some of its largest developed markets, exporting a model of cheaper deliveries and reduced warehousing costs.

Online shopping is booming in India, where millions of consumers are newly able to access the Internet thanks to cheap smartphones.

For Amazon, it is already the largest contributor of new customers outside the United States.

But, like local rivals Flipkart and Snapdeal, Amazon has struggled with deliveries in cities where snarl-ups are frequent and road signs unreliable. In response, firms have set up logistics networks and use motorbikes instead of trucks.

Flipkart, for one, has tapped Mumbai's dabbawalas, a more than a century-old lunch box distribution service.

More than two years on from its arrival in India, Amazon says it is now ready to apply some of the innovations applied here to markets including the United States, Mexico and Brazil.

Britain, for example, could get a delivery service called Easy Ship, where orders are picked up by Amazon's crew directly from sellers, cutting out the time and cost of sending goods to a warehouse and the need for more space.

"It's not just that we learn from the big brothers like North America," Akhil Saxena, director of operations at Amazon India said in a recent interview at the company's local headquarters in the southtern city of Bengaluru.

"There is so much focus on India and the kind of growth that is happening here... People say, if it works for them, let's see what we can pick and learn," said Saxena.

Speedy and cheap delivery is critical to winning over customers in a cut-throat industry, where heavy discounts mean firms are already burning through substantial cash to grow.

Harish Bijoor, an independent brand expert and business analyst, said the innovative delivery services were helping Amazon extend its reach in India, even at the cost of giving up some control over logistics - a lesson it could export.

"E-commerce is a trust business today and without that you cannot achieve scale," Bijoor said.

Unlike in its other markets, government restrictions on foreign investment mean Amazon operates in India purely as a marketplace, rather than hawking its own goods.

That tightens its relations with a multitude of sellers, and underlines the need to keep those connections simple.

Launched in India in 2014, Easy Ship, for example, cuts out costs of storing, packing and separately shipping goods.

"This probably cuts your overall transportation cost at least by half," said Samuel Thomas, Amazon India's director of transportation, adding that it trains sellers to provide the service, now used by 30,000, or more than 75 per cent of them.

Another service introduced in India in May and considered for export to other markets, Seller Flex, allows sellers to have the flexibility to store goods and ship them to customers on their own, instead of routing them through Amazon.

Amazon provides technology and training to ensure goods are packed, labelled and delivered as the company would.

While Amazon in developed markets may not want to tweak its model for best selling goods, analysts said, it could consider the made-in-India seller solution to cut down on warehousing and delivery costs for thousands of "non core" products which are offered, but infrequently bought.

"Amazon is becoming a lot more flexible about how it services its customers," said Neil Saunders, at UK-based retail research firm Conlumino.

"If you go back about five years ... it was fairly one-dimensional. Now you have Amazon Prime, in some cities you have same day deliveries, a couple of hour deliveries ... And this is part of that."