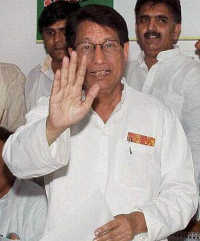 Civil Aviation Minister Ajit Singh has written a letter to Uttar Pradesh Chief Minister Akhilesh Yadav asking him to send a team of experts to Muthura to set up an international airport there, as the government wants to boost tourism there and provide easy access of Taj Mahal.

The letter was sent to Akhilesh by the minister as he has been an ardent supporter of Greenfield International airport in place of an airport on the fast expanding Noida's super highway connecting Agra with Delhi.

Interestingly his party is set to loose Mathura assembly seat from Matt from where his son Jayant Chaudhary resigned recently.

Initially, the minister talked off having a helicopter service between Delhi, Vrindavan, Agra and Delhi to enable tourists to visit the place on day return basis.

According to sources in the civil aviation ministry, instead of Akhilesh writing to the minister in charge, here is an interesting case where the higher authority is writing to a state chief minister and promoting a concept close to his heart.

"So far he has not been able to break the strike by Indian Pilot's Guild in last five weeks and instead he is selling his own concept to boost tourism. The whole idea is to have an airport next to his village Jehwar district in Gautam Budh Nagar," a former official told rediff.com.

Meanwhile, PTI adds: Welcoming the Uttar Pradesh government's decision to scrap the Greenfield international airport project at Jewar, Singh has asked Yadav to send a fresh proposal for the same at Mathura to his ministry.

In his letter to the chief minister, Singh said due to some "complicated issues" which remained unresolved for five years the proposed Taj International Aviation Hub with Greenfield airport at Jewar in Gautam Buddha Nagar could not get clearance from a Group of Ministers.

The minister said that the Taj trapezium zone needs a new world class airport to spur the growth of tourism and overall economic and industrial growth in the area.

"I would recommend a location at Mathura, preferably with an easy access to the expressway. I would request you to send the proposal for establishing a new greenfield airport at the proposed new location to my ministry for necessary clearances.

"I assure you that we will treat it as top priority and put it on fast track to fulfill the aspirations of the area and its people," Singh said in his letter.

He said the TIAH should be located near to the Taj but there should not be any conflict of airspace with the Indian Air Force airport at Agra. Possibility of legal or policy issues were ruled out.

Last month, the Uttar Pradesh government had scrapped the Greenfield international airport project at Jewar mooted by the previous Mayawati government citing unavailability of the Centre's clearance for it.

The state government is planning to develop a new international airport between Agra and Mathura. The process of identifying land would be completed within a month and process of land acquisition would start after that.

The airport project at Jewar, which is less than about 70km from the Indira Gandhi International Airport in New Delhi, has not been given clearance as it flouted the rule that no airport can be constructed within 150km from an existing one.