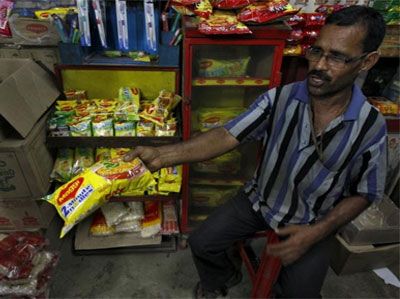 Weeks after Maggi noodles re-entered Indian market, the stand-off between the government and Nestle is putting doubts and evoking confusion in the minds of the consumers.

Nestle India re-launched Maggi earlier this month with a mandate of being safe for consumption amid much fanfare. But, the stand-off between the government and Nestle in the apex consumer tribunal is in full swing. And, amid arguments and counterviews, it is the consumers who are in a fix. Prakash Yadav, who sells cooked Maggi in Delhi, faces loss if a ban, as being discussed by his customers, is enforced again. “When the (high) court has allowed Maggi to be sold what is the issue?” he questions.

“I don’t see any point questioning the product when it has already passed all the safety tests according to the high court’s directions,” a ‘Maggi lover’ law student from Delhi University said.

“After the August 13 Bombay high court order and the product clearing all the subsequent tests, the matter is over. This (class-action suit) is only a drag and hurting the (industry) sentiment and increasing bitterness between the two parties,” a legal expert said on condition of anonymity.

“Many customers are buying in excess, not only because of the re-launch, some also want to be prepared with their own stocks in anticipation of another ban”, an executive from a retail chain company said.

While the government’s petition was based on the tests conducted by various state food regulators, its pleas for more tests on samples that were in possession of FSSAI is a bone of contention between the company and the government now.

“Section 13 of the (consumer protection) act clearly states that the complainant (the government) should come up with the damaged goods for testing. However, the government is trying to source new samples from another party (FSSAI). This is not viable as per consumer protection act,” said Rajesh Batra, an independent legal expert who advises Nestle India . While reports of samples sent for re-testing earlier by NCDRC are yet to arrive, the government’s repeated plea to send more samples for testing indicate a “witch-hunt” approach, Nestle India lawyer Iqbal Chagla argued in the commission.

The government on the other hand says they can ask for more tests under the law. “Sections  2 and 12 of the consumer protection act allow  us to ask questions over the quality of the product on behalf of consumers at large,” Prabhsahay Kaur, appearing on behalf of the government said. Since the quality of Maggi is in question and the case is not about any specific product pack, more tests are required before the commission reaches a conclusion, she says.

The bench comprising Justice V K Jain and B C Gupta on Tuesday agreed to consider the plea on conditions the government would not ask for more tests once the second set of the noodles are send. The Additional Solicitor General Sanjay Jain has accepted this.